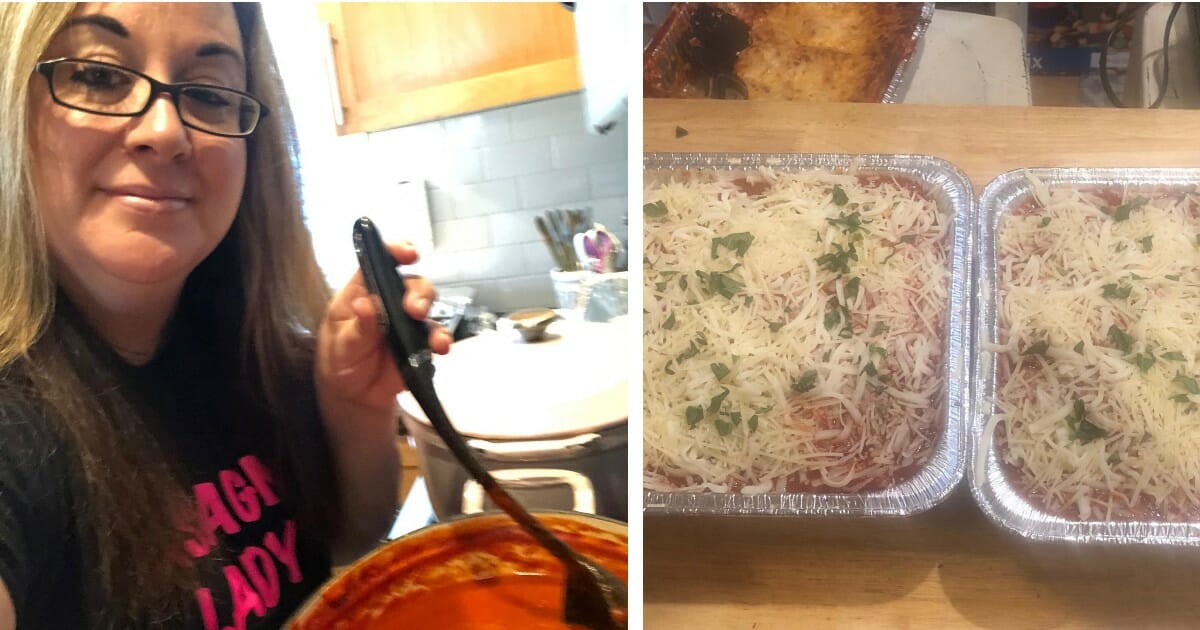 While there’s no right or wrong way to occupy your time spent in quarantine, Michelle Brenner knew she didn’t want to sit around. She wanted to help those in her community of Gig Harbor, Washington.

“I knew it was my time in my life to give back to the people who paved life’s path for me to have the 45 years of life that I’ve had,” she told CNN.

So with a family recipe for lasagna and her stimulus check, she got to work.

Like so many Americans, Brenner was furloughed from her job during the pandemic. To fill her newfound time, she signed up to be a shopper for Instacart.

During her very short stint as a shopper, she noticed one thing that many of the orders had in common: frozen lasagna.

And there was one customer in particular who stood out to her. He was in his nineties and told her he hadn’t had any fresh food in months.

It got her thinking.

She returned to the store and picked up the ingredients to make her grandmother’s lasagna. Once she cooked the meal, she posted it on Facebook and offered to make one for anyone, free of charge.

“The whole point of this is to spread that sense of community wherever we can through the comfort of lasagna,” she said. “So, I don’t want anybody to feel disincluded because reality is there are people out there who can’t afford a dollar.”

Brenner took her $1,200 stimulus check, which she could have saved for herself, and purchased enough ingredients to make 130 lasagnas.

After she made 130 lasagnas for people in her community, she continued making meals.

She spends anywhere between eight and fourteen hours every day of the week cooking lasagnas to distribute throughout Gig Harbor.

Her passion for helping others has not gone unnoticed. Since offering her services, local businesses have offered to help. Instead of cooking the lasagnas in her own kitchen, Brenner has access to the kitchen at Gig Harbor Sportsman’s club.

She’s also received monetary donations and in the form of ingredients.

In a fundraiser, which she posted on Facebook, Brenner said she has raised over $23,000 which has helped her hand out 1257 lasagnas over the past 9 weeks.

It’s unclear what will happen to her operation if and when she’s recalled to her job, but for now Brenner is focused on feeding her community.

“The world as we know it is falling apart, but my two little hands are capable of making a difference,” she said. “I can’t change the world, but I can make lasagna.”

Thank you Michelle for helping so many people in your community! We need more people like you, especially at a time when so many of us are having a difficult time.