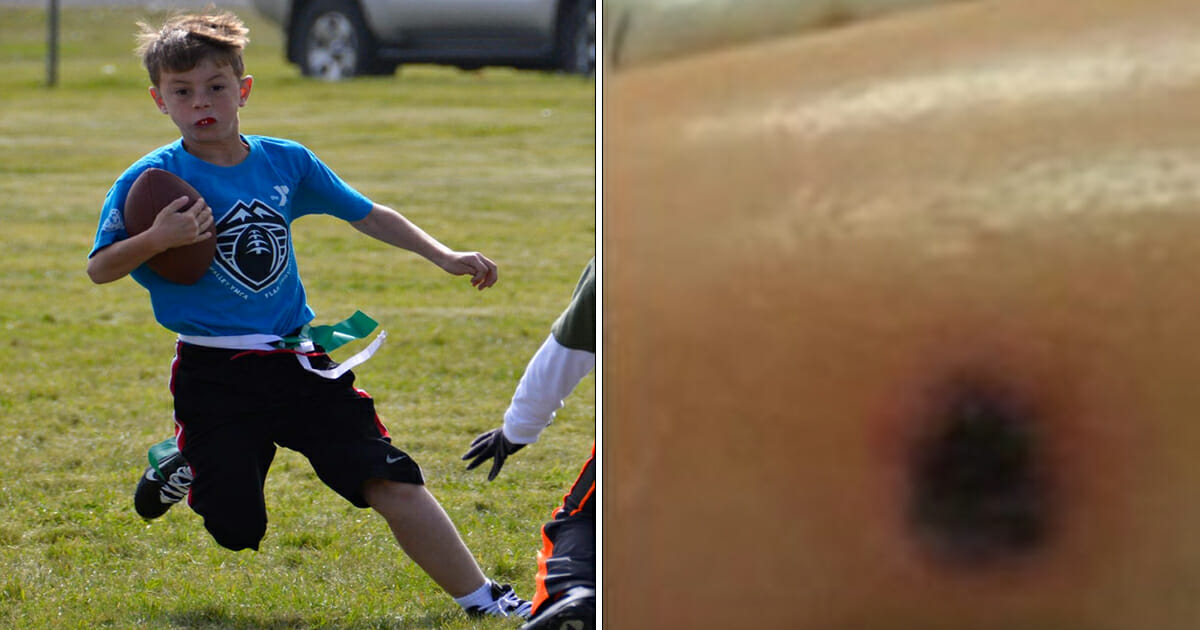 Tomorrow is promised to no one.

That’s a painful truth that almost all of us come to realize at one point or another. One day things can seem fine, the next your world can be turned upside down.

The family of Keith Pierce know that all too well. The fourth-grader was a student at Three Forks District School in Montana, and had just recently turned 10.

What he couldn’t have known, however, was that a strange mark that appeared on his leg after a football game would lead to his unexpected death mere days later.

After Keith finished a routine football game, his parent noticed that his leg was beginning to swell. According to the Daily Mail, as a precaution they took him to Bozeman Deaconess hospital, where doctors examined him and ruled out a number of serious possibilities, including cancer, before sending him home.

Sadly, Keith was far from in the clear. His symptoms soon worsened, and he was rushed to St. Vincent Hospital in Billings. Once there, he underwent emergency surgery designed to save his life.

It was too little, too late. The 10-year-old never woke up.

2 years ago today this was the start of a major life change we never saw coming. Our little man taken away just 3 days…

Keith’s family were then forced to make a heart-wrenching decision. They consented to his life-support machine being turned off, and Keith slipped away.

NBC Montana explained that a post-mortem forensic examination then determined Keith had actually died from a spider bite sustained while playing football. The venom, from a brown recluse spider, had induced severe sepsis.

“We were not sure if they had any kind of medical insurance,” Clark said to ABC Fox Montana at the time, “and even with medical insurance there is so much—funeral expenses are so expensive—so we thought we would try an online fundraiser.”

Keith was taken from the world too early, and under exceptionally cruel circumstances. The bite from the brown recluse spider can prove fatal to victims, and sadly many of us wouldn’t even be able to identify it.

Watch the video below for further help in identifying bug bites and stings:

Rest in peace, Keith Pierce. We’re sending all our thoughts and prayers in the direction of his family.

Please share this article to raise awareness for a danger that many might not even perceive. By spreading this article on Facebook, you could potentially save a life.