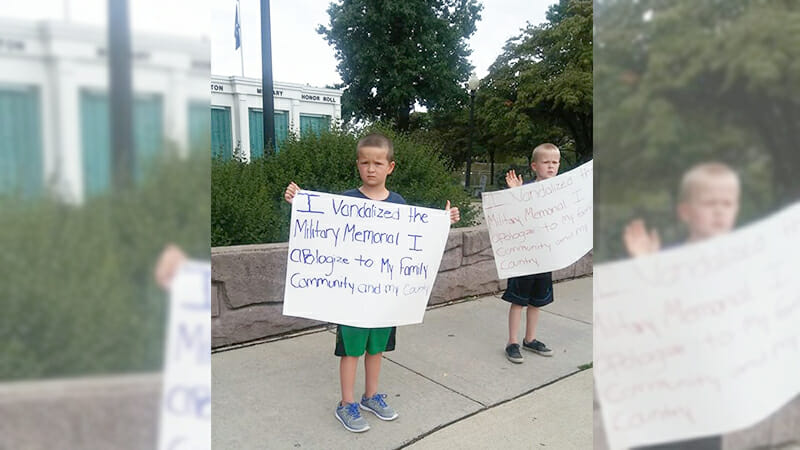 When I was young, it was drilled into me that above all else it was important that I respected those who had served.

After all, what could be more noble – and thereby more deserved of acknowledgement – than people risking their lives in an effort to keep the country safe?

Now, I know the same principles are passed down today, and I know many parents endeavour greatly to teach their children about respecting our fallen soldiers. Even so, kids will be kids, and sometimes even the most diligent of parents can bear witness to their offspring making a mistake.

Alicia Sharp knows a thing or two about that. In August of 2018, her two boys vandalized a military memorial in Barberton, Ohio. They were dealt a punishment they won’t soon forget.

The VFW Memorial is a great addition to beautiful Lake Anna. If you would like to support the local VFW with maintenance…

Speaking to Cleveland 19, Alicia said: “My two little boys decided to sneak out of the house last Sunday morning with their friend and ripped flowers out of the Military Memorial at Lake Anna in Barberton.”

Knowing that she simply couldn’t stand by and allow them to go unpunished, Alicia devised a clever way to teach them the error of their ways.

“I made them stand with signs down by the lake for two hours on Friday saying what they did and apologizing,” Sharp said.

Not only that, but the boys were both stripped of their $50 monthly allowance for the month. In a move that catered for poetic justice, Alicia put the combined $100 toward feeding veterans at the Shannon Bar where she works.

She explained: “Most of the folks who come in here are veterans.”

According to Sharp, her boys weren’t appropriately aware of the significance of the memorial, but they certainly are now. After Alicia posted pictures online of the punishment, it went viral, with many agreeing that it was the perfect way to learn them.

What do you think? Was Alicia’s a fitting punishment? Let us know in the comments box.

Meanwhile, share this article if you agree that all veterans deserve to be honored.