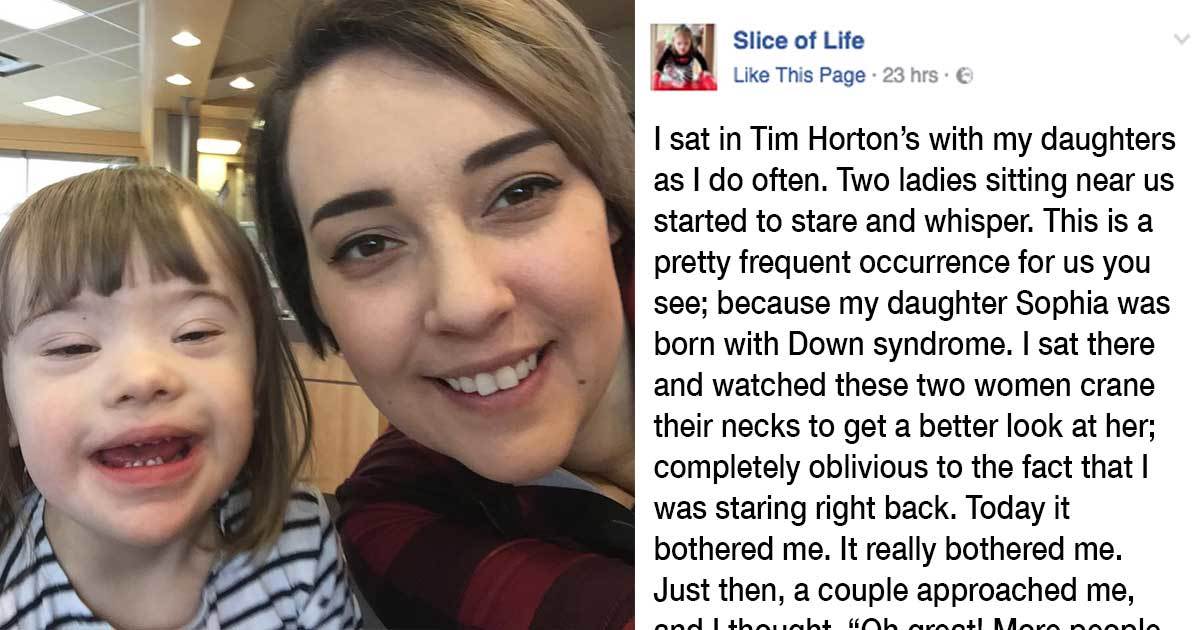 Some people seem to think that it’s OK to point and whisper things about others who look different from them. And that’s just what happened recently to a little girl named Sophia who has Down syndrome.

She was at a coffee shop with her mother, Pam, when two women did just that. They pointed and whispered.

But then, an elderly couple came up and said something moved Sophia’s mom to tears.

Ever since Sophia was born, she has had to endure people looking at her strangely, pointing at her, and whispering. Sophia, who has Down syndrome, is used to it by now—and so is her mom, Pam—but that doesn’t mean it doesn’t hurt every time it happens.

When Sophia was born, her mother immediately understood how beautiful and loving Sophia is. She just hopes that others see it, too. Which is why Pam was so surprised by what happened recently at a coffee shop that she wrote about it on Facebook.

I sat in Tim Horton’s with my daughters as I do often. Two ladies sitting near us started to stare and whisper. This is a pretty frequent occurrence for us you see; because my daughter Sophia was born with Down syndrome. I sat there and watched these two women crane their necks to get a better look at her; completely oblivious to the fact that I was staring right back. Today it bothered me. It really bothered me.

Just then, a couple approached me, and I thought, “Oh great! More people who want to take a closer look!”

The man greeted Sophia with a high five and a handshake, and Sophia smiled and waved back. He looked at me with tears in his eyes and said, “I have a story I would really like to share with you. But I am afraid I won’t get through it without choking up.”

I gently encouraged him to share, because now I was curious. This interaction was not what I was expecting.

He told me that he had watched the news last night. There was an interview of a mother who had recently given birth to a child with a major disability. She was on the news defending her decision to keep her baby.

She was defending her choice NOT to terminate despite her doctors encouraging her to do so. He said, “The point is, you never know a person’s impact on the world. You can never know what a person is able to do unless you give them a chance.”

He looked at me just before he turned to walk away and said, “You are a beautiful person. Your daughter is beautiful. Congratulations!”

In a world where my daughter’s life is whispered about, where she is stared at, this man saw her IMPORTANCE.

This story was so just beautiful. Sophia seems to be an amazing little girl with lots of energy who deserves all the love that she can get.

Don’t forget to share this heartwarming story with your friends if you also think the other mom’s words were absolutely gorgeous.