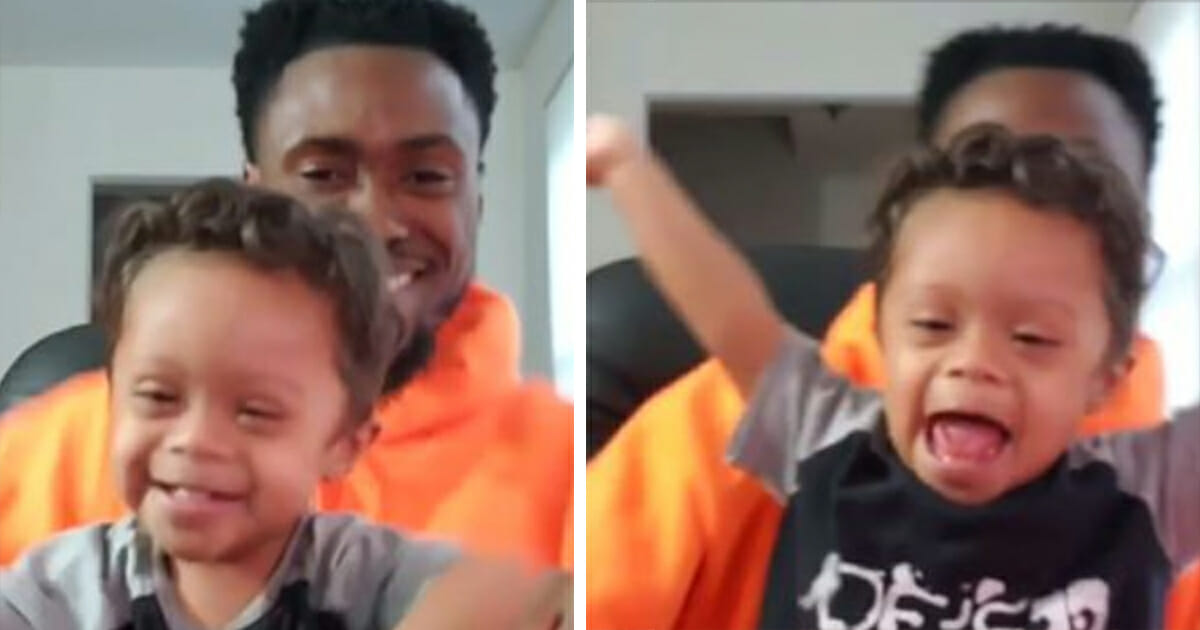 Beating a disease like cancer is no small feat. In fact, it’s such a momentous achievement that it deserves praise and celebration.

Which is why it’s so heartwarming to see the video released by Kenny and Kristian Thomas, made to honor Kristian reaching the milestone of 11 months cancer-free.

Two-year-old Kristian, who has Down syndrome, was diagnosed with leukaemia in June 2018. He underwent five rounds of chemotherapy before going into remission, and as yet there’s been no sign of the cancer returning.

Today is the 1st Day I've my Dad in 4 years. This is also the first day Kristian got to meet his Pop Pop…No matter how it happened I'm just grateful it happened that I'm blessed to see my pops in the flesh again instead of just Facetime lol. Praise God!! The Thomas Men!! ?????? …………………………. #fightkristian #fightcancer #thethomasclan #thedancingdad #kennyclutch

To celebrate that fact, he and dad Kenny, who used to entertain Kristian in hospital while dancing for him, have released their own video. In it, the pair can be seen doing their victory dance, which, of course, is so cute it brings tears to the eyes.

Kenny, a choreographer and dance studio owner, took to Instagram to release the video, accompanying it with the caption: “Father Son chemistry…11 Months Cancer Free!! If we can do it you can do it!! Live Free!! Drop a [heart emoji] for Father Son Vibes!!!”

Needless to say, Kenny and Kristian have proved quite the hit. The video has over 28,000 views on Instagram, with people overjoyed at the positivity and love on display.

Kenny told UNILAD: “We know first hand how it can be dealing with the struggles of childhood cancer. The last thing anyone wants to lose is their faith and happiness.”

Kristian was Kenny and wife Josilyne’s fourth child. The couple learned there was a 75 percent chance he would be born with Down syndrome during a hospital visit in 2016, when Josilyne was pregnant.

Life may have thrown things at little Kristian, but he’s not letting them get in the way of enjoying life to the full.

Happy to see another Day, Happy to be Cancer Free, Celebrate Life with every breath you take. Give thanks to the Most High and Finish the Race, Finsh The Race!! No matter what you are going through in life, if you woke up this morning be happy that you get another crack at being successful TODAY!! Drop a ? if this started your day off well!! ??? …………………………………….. #fightkristian #fightcancer #fightleukemia #thethomasclan #family #downsyndrome #thedancingdad #kennyclutchspeaks #motivationalspeaker #motivationalvideos #impact #inspiration #happy #pharrell #dancer #dancing #childhoodcancerawareness

Let’s hear it for Kristian and Kenny, what a wonderful father-son partnership they are!

It’s great to see so much positivity in the world. We hope others can be inspired by them too.

Share this article if the video of Kristian and Kenny put a smile on your face.