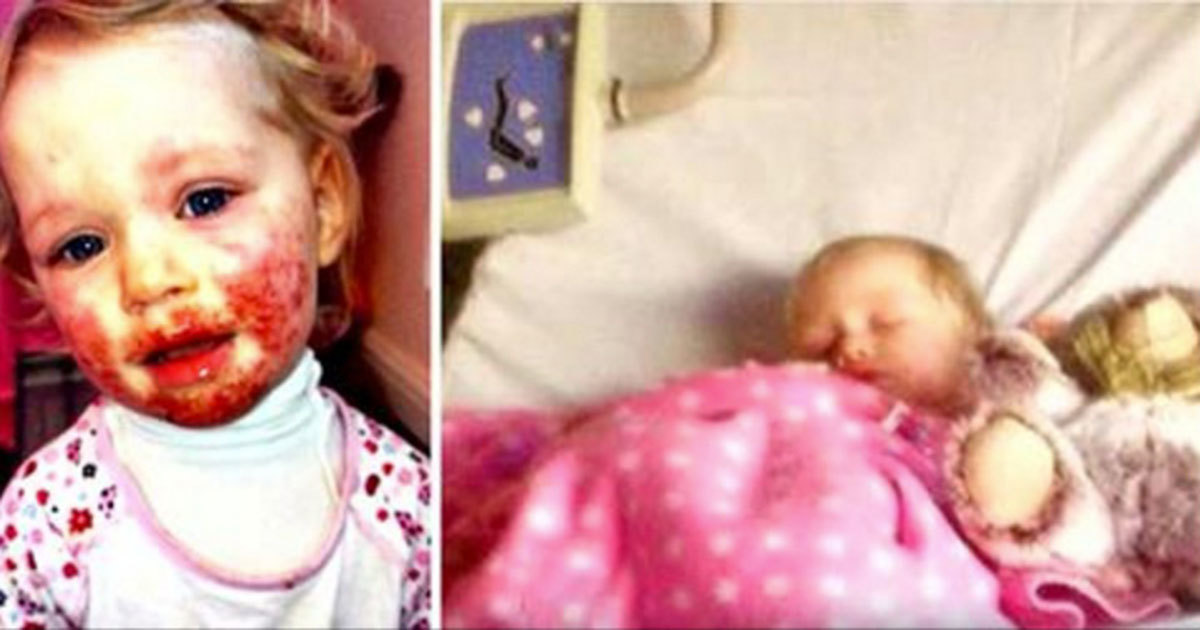 On Sienna Duffield’s second birthday in 2016, a family member gave her a congratulatory kiss on the cheek. But little did anyone know that that one kiss would lead to months of pain. And just one day later, Sienna’s face looked like someone had thrown acid at it.

The kiss was soon forgotten and it would be a full eight months before doctors realized the cause of Sienna’s terrible blisters.

“It started to look like someone had thrown acid over her face, it spread from her mouth to her cheeks, and above her eyes,” Sienna’s mother told Inside Edition. And this was just the beginning of a long nightmare. Sienna’s awful rash wouldn’t go away and her doctors didn’t know what to do.

For eight months, the two-year-old suffered through life with the terrible rash.

The blisters on Sienna’s face bled when they broke. Her mother said that it was like her daughter was being eaten alive her infection.

Sienna’s clothes were covered in blood and she had difficulty eating because of pain around her mouth.

Sienna’s mother hardly dared take her out because strangers stared and made nasty comments.

At first, doctors thought that Sienna’s rash was due to eczema or allergies, but none of the medications they gave her had any effect. In the end, Sienna had to be hospitalized. She could no longer eat and had to be fed though an IV drip.

Desperate to find the cause of her daughter’s infection, Sienna’s mom went over the days before Sienna became ill in her mind. And it was only then, eight months after the outbreak, that she remembered Sienna getting a kiss from a relative—a relative who, it turns out, had herpes.

Once doctors knew that Sienna had come into contact with herpes simplex virus 1, they were finally able to give Sienna the right treatment.

The little girls skin healed and she was able to eat again.

“For the past few months, Sienna’s face has looked amazing and the infection has not returned. There is always a chance of it coming back, but fingers crossed it won’t happen and her skin will stay as good as it is now,” Sienna’s mother said.

I’m keeping my fingers crossed that Sienna’s infection doesn’t return in the future!

Now, Sienna’s mother is warning other parents not to let strangers kiss their children. Even if people don’t have visible signs of herpes, they can be carriers of the virus, and we need to protect our small children from coming into contact with the it.

We’ve previously reported on Claire Henderson, whose infant daughter was almost lost her life after being infected with oral herpes through a kiss.

The younger children are, the more dangerous the virus can be to them. Help share this reminder with all of the parents of young children you know.