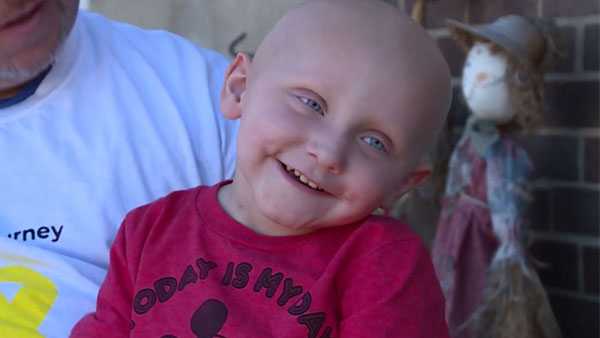 A two-year-old boy with terminal cancer is hoping to live out his wish of celebrating a number of different holidays, one each day for a week.

As per reports, Easton Wilson was playing upstairs last July and hurt his knee falling over. Mom Tracy said he cried for a minute, limped for a minute, and then was fine.

Yet a few days later, a babysitter minding Easton called his parents to say that he had fallen again, and that his knee was swollen.

Again, Easton appeared to recover from his fall without any major problems. Tracy’s husband, Jerry, picked their son up from the sitter’s, and later that day he was running around the yard with his pals.

“The next day we woke up and he couldn’t walk on it and it was swollen,” Tracy Wilson said.

“I had to go to work that day, so I went ahead and went into work and he [Jerry] took him to Anderson Urgent Care, because I thought maybe he just bruised his knee or I don’t know did he tear his ACL? Can they do that at 2?”

It turned out to be much worse. Tracy got a call from Jerry, saying she had to leave work because doctors had discovered a tumor in Easton’s knee.

Tracy explained: “So I left, they rushed us down to Cincinnati Children’s and when we got there, the whole oncology team was there waiting. And they told us that he has osteosarcoma, which is a form of bone cancer.”

Easton and his family were admitted that same night, and chemotherapy was started a few days later.

“We did a round of chemo treatment and it didn’t help. It didn’t respond to the chemo,” Tracy said.

Sadly, further scans showed that the cancer had spread to Easton’s lungs, his other knee, his foot and shoulders.

The family were given three options: they could opt for a trial, another round of a different chemo, or just make Easton feel comfortable.

“We decided to try the other round of chemo, so we started that three weeks ago. It’s helped with the pain, that’s a lot of reasons why we we’re doing it again, for the pain,” Tracy said.

At the moment, the swelling has gone down a bit from this second type of chemo, though they won’t know if the cancer is responding for a couple of weeks.

“We asked them, you know, I know they can’t tell me but, ‘How much time?’ Because Christmas is coming, his birthday’s in February, my daughter’s birthday was coming up. And the doctor basically said, ‘I wouldn’t see February’.”

A hospice has since been called in.

Easton reportedly has one wish now: to celebrate different holidays for a week — first his birthday, then Halloween, St. Patrick’s Day, Fourth of July, Easter and Thanksgiving, finishing it all off with a Christmas parade this upcoming Tuesday.

“My hope is that he will enjoy every minute of it,” Tracy said. “It’s pretty important to us because we want to spend as many holidays with him as we can.”

My heart goes out to this family. I can only imagine the pain and misery caused by this terrible situation.

Join us in sending love to this family, and to poor Easton who deserves all the prayers in the world.