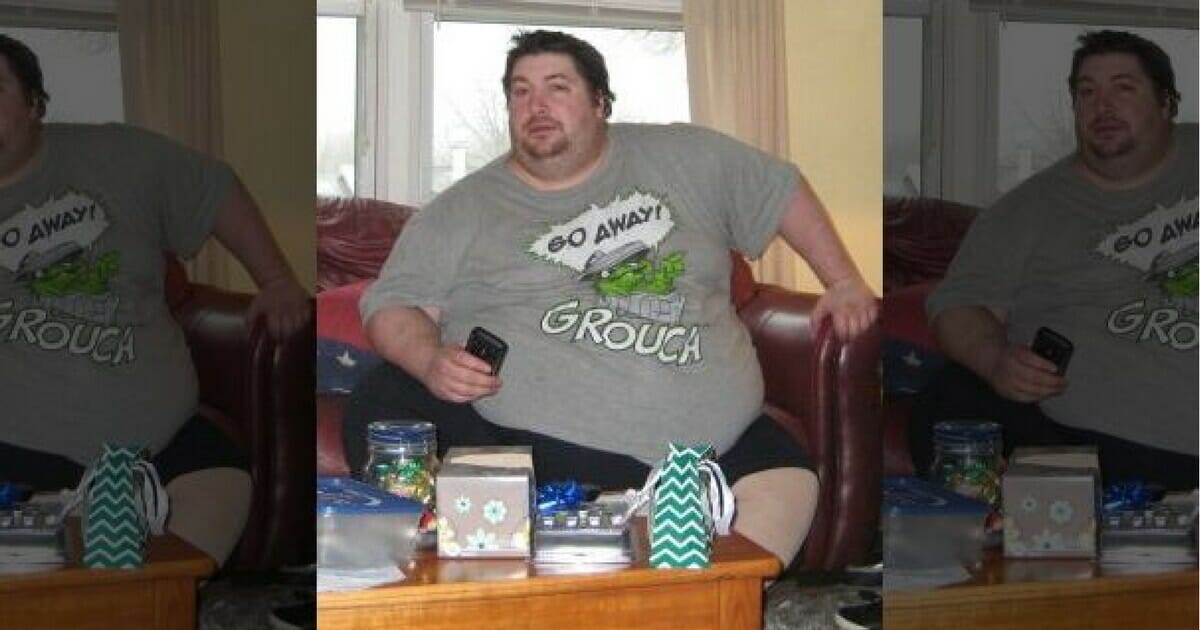 There are many things in life that can affect your weight. Some people believe it’s your diet alone that sees you pile on or lose the pounds. While that holds some truth, there are often a number of factors at play.

Prior to 2010, Logan Goodall was your average man in his 30s. He was married, had two kids and was holding down a job.

Then, a divorce, quickly followed by the death of his father, changed everything. Soon he was gaining weight and spiralling into a state where he felt sorry for himself and eating copious amounts for comfort. Something had to change…

Logan had worked as a lumberyard worker but was forced to quit after becoming too heavy to cope with the rigours of his everyday job. At some point, he became some large that he could no longer drive his car – his life changed completely.

Logan wouldn’t eat at all during the day, but when it came to the nights he would gorge to an extreme excess. Pizza, chicken wings, ice cream and soda became his go-to diet, and he felt terrible about it.

“I felt completely worthless,” he said. “Everything I was trying I failed. I would start a diet and I would fail.”

“At 575 pounds, I hated myself so much that I thought I would be doing everyone a favor if I just died. For two years I didn’t leave the house. I had become a complete recluse and my anxiety was really high. I just didn’t want anyone to see me.”

It should go without saying that Logan’s way of life was unsustainable. After seven years of degrading his body, it caught up with him.

He says: “In January 2017, I was coming down the stairs and I couldn’t catch my breath.

“I had to be taken by ambulance to the hospital and it was so embarrassing. In the hospital, everything that could have been wrong with me was.

“I was suffering from sleep apnea; I was hooked up to oxygen. I was diagnosed with type two diabetes; I was in congestive heart failure. I was suffering pulmonary embolisms and deep vein thrombosis.”

Any one of those issues would be a serious problem. But a combination of all of them? It was close to a death-sentence.

For Logan, it was the wake-up call he desperately needed. “I was worried I wouldn’t see my kids grow up,” he said.

With his eyes set on a clear goal, Logan began to transform himself. He started to eat healthier, took up swimming and completely changed his unhealthy lifestyle.

“It’s unreal to me that I’ve managed to achieve this,” he said. “Diet was the main way I have lost weight, but I started swimming with my friend and that really took the pressure off my joints.”

“Changing my life was the only option for me. I didn’t have a choice if I wanted to see my kids grow up.”

His two children, Alexander, 13, and Allison, 10, are delighted to see their dad making the change.

“My kids are over the moon,” said Logan. “They have their dad back after all these years.”

Fair play to Logan for turning his life around when he was in a pit of despair! It’s never easy to battle yourself, especially not when your goals seem so far away. And yet, that’s exactly what Logan did, all with the aim of giving his children their father back.

Share this story if you’re impressed with Logan’s effort. Let’s show him and others that they’re never alone, no matter how desperate things might get!