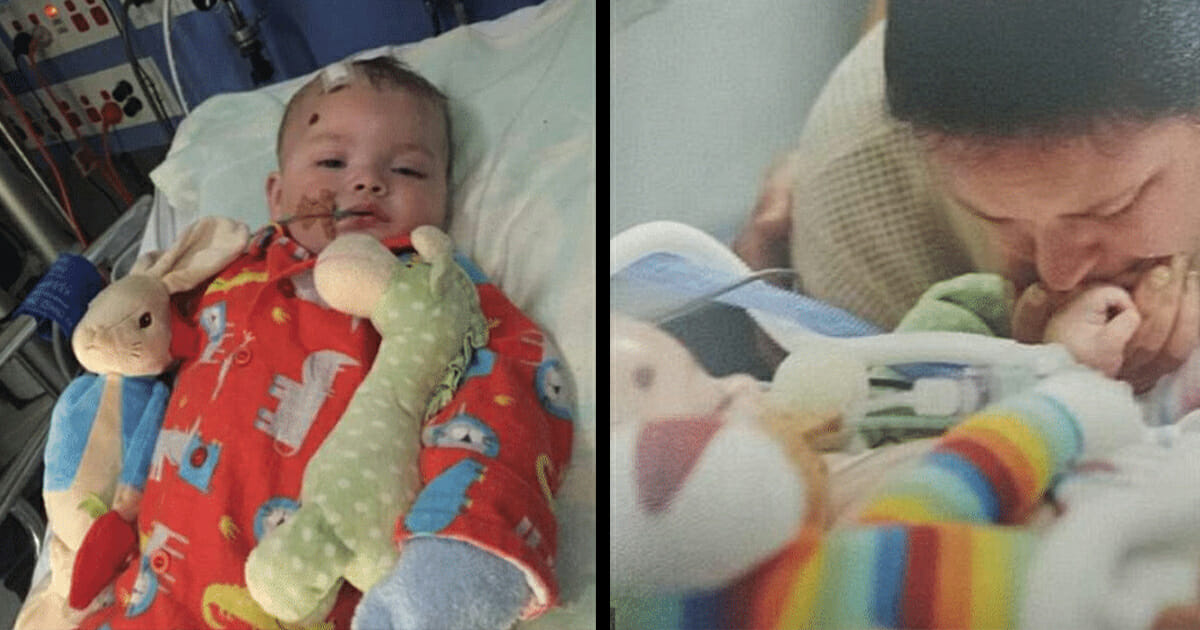 Let nobody ever say Bobby Webber isn’t a fighter.

In 2014, when little Bobby was just 7-months-old, he was violently assaulted by Andrew Nolan, the fiancé of his aunt. For four hours he was beaten and tortured, ultimately being left in a critical condition fighting for his life.

His parents, Barry and Elise, were on their honeymoon when the horrific incident took place. They had left their kids in the temporary care of Elise’s sister, who was engaged to be married to Nolan.

Bobby’s injuries were so severe that he was placed on life support. His parents were advised by doctors that the best thing to do would be to turn his ventilators off. They did so, not knowing that their little boy would go on to defy all the odds laid before him.

When Barry and Elise Webber went on their honeymoon, not in the wildest nightmares could they have anticipated what would happen to their 7-month-old son Bobby. They had left him the care of Elise’s sister, who was engaged to a man named Andrew Nolan.

One afternoon, Bobby’s aunt took his older siblings out to watch a movie, leaving him in Nolan’s care.

Nolan, who had been a friend of the family for more than a decade, proceeded to beat and torture Bobby, causing multiple skull fractures, a fracture to his vertebra, bite marks all over his body, and bruised genitalia.

Bobby was rushed to hospital, where he was placed on life support. Doctors weren’t hopeful of the boy’s survival, and advised his parents – as per the Daily Mail – to switch off his ventilator.

Yet when they did so, to the amazement of all, Bobby managed to keep breathing. To this day, he continues to make remarkable progress. Dubbed ‘Bobby the Brave’, the little one has overcome four years of hurdles, and he’s not done yet.

As a result of his injuries, Bobby developed quadriplegic cerebral palsy and vision impairment, but his mom says he’s never let things keep him down.

“Absolutely everything that Bobby achieves blows my mind,” she said, as per Daily Mail Australia.

“The hardest part is the constant position changing. He can’t sit up or crawl to get to where he wants to be, he relies on us to help him,” she said.

“It never stops. As soon as Bobby wakes up, there is a lot of lifting involved. We give him his first round of medication and try to get him changed. We take him to the toilet because he’s toilet training at the moment. But he’s nearly completely toilet trained — which is amazing.

“It is honestly one of his biggest achievements, and it has changed so much for us as a family. We were told all these things, he would never do any of this stuff but here he is doing it. He’s in remission from epilepsy, as well.”

Now 4, Bobby has knocked down every hurdle placed before him. Not only is he in remission from epilepsy (he had his last seizure three years ago), but he also attends Liberty Allstars cheerleading every Sunday – a team composed of kids with special abilities.

“It has given him the opportunity to be in a sport, and he doesn’t feel like he’s different,” Elise said.

“He doesn’t have stigma, and he gets so much joy from being at Liberty, going out into competitions and hearing everybody clap for something that he is proud of. It has been wonderful for awareness of his body.

“He really responds so well to music and just the supportive environment for me, Bobby and Olivia is a blessing. There are people in that gym who were once complete strangers and are now family and friends.”

We can’t offer Bobby enough praise. This little boy was beaten and tortured by an evil soul who deserves the prison sentence dealt unto him, and yet Bobby continues to inspire others with everything he does.

Please help us shed some light on Bobby’s remarkable achievements, and let the world know of his strength.