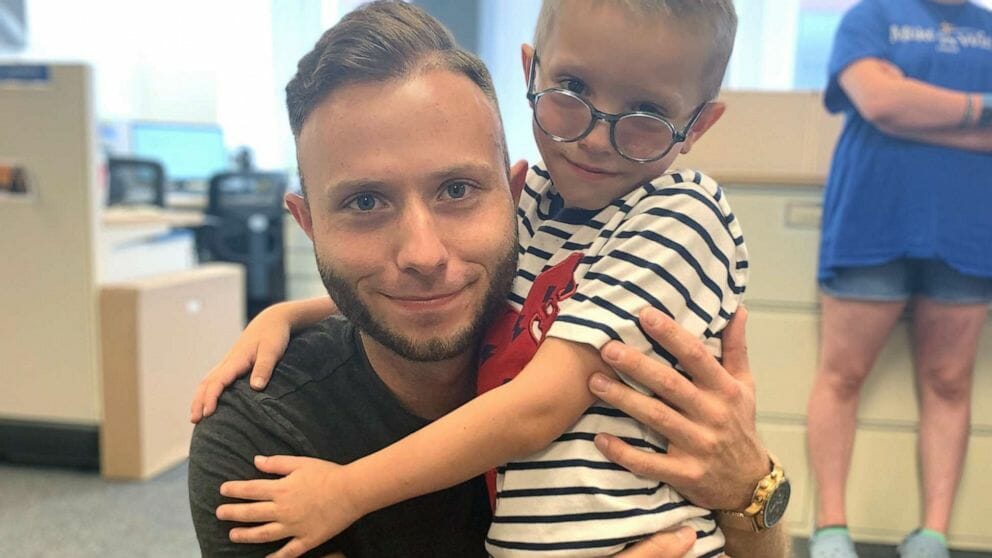 We all have choices in life. Some are big, some are small, but all, in the end, need to be made one way or another. Even not choosing is a choice in itself, confusing though that may sound.

7-year-old Gabriel Smith was presented with a choice six years after surviving a bone marrow transplant.

His choice was as follows: Go to Disney World for the first time, or meet the stranger who’s bone marrow donation had saved his life.

When Make-A-Wish, an organization that facilitates life-changing wishes for children with serious illnesses, told Gabriel that he could do one of the two above, he had a decision to make.

It would have been natural for a child to jump at the chance to go to Disney World. After all, what child doesn’t want to go there?

Even so, Gabriel, of Springfield, Illinois, opted instead to meet the man who had donated his own bone marrow towards saving Gabriel’s life.

He could either go to Disney World for the first time or meet the stranger who saved his life.https://t.co/AevC8h5Zi2

His name is Dennis Gutt, a 25-year-old carpenter from Germany.

Gabriel’s mom, Lauren Smith, told Good Morning America: “Gabriel wanted to take Dennis to meet Mickey Mouse. When he had to pick one, immediately he said, ‘I want to meet my donor.’”

So Make-A-Wish arranged for Gutt to fly from Germany to Illinois last week in order to meet Gabriel and his family.

“When he came out of the [hotel] elevator, we were all staring and Gabriel just got stage fright, he couldn’t move or talk,” Smith recalled. “Dennis came right over and gave him a big handshake and hug and then Gabriel warmed up to him.”

Six years after a stranger gave him bone marrow for a transplant, Gabriel Smith, 7, is getting the chance to meet his donor. But to make it happen, Gabriel had to decide to give up something big. https://t.co/q6v1Jj3dur

The encounter was one that Gabriel’s parents would have struggled to imagine during his darkest days. Shortly after being born in 2012, Gabriel needed a blood transfusion, and was then rushed to a children’s hospital in St. Louis, two hours away from his family’s home.

Gabriel needed blood and platelet transfusions throughout the first year of his life. When it was determined he required a bone marrow transplant, his family and others from the community stood up to see if they matched.

“They found Dennis through the Be the Match registry and on the day of the transplant they told us he was a 19-year-old from Europe,” Smith said. “That’s all they were allowed to tell us.”

Gabriel’s mom said: “If the transplant hadn’t happened, if we hadn’t found a match through the registry, he wouldn’t be alive. He couldn’t keep going through the transfusions.”

In the beginning, Gutt’s identity wasn’t known. Gabriel’s family referred to him simply as “the superhero” until 2015, when the Smiths were permitted to learn his name.

Smith searched Gutt up on Facebook and connected with him.

“I couldn’t believe I found the person who saved Gabriel’s life,” she said. “Back when he got the transplant, we couldn’t believe that the donor was only 19, that somebody who was 19 years old saved our son’s life.”

Gutt, meanwhile, doesn’t think of himself as having done anything special.

“I saved another person’s life because I donated something which regrows up in my body in a few weeks,” Gutt told Good Morning America by email. “Unbelievable.”

What’s more, it seems as though Gutt and the Smith family greatly enjoyed one another’s company. Gutt spent several days in Springfield with Gabriel, taking in the sights and doing things he’d never normally experience.

“The connection was immediate. Immediately we were like family,” Smith said. “It was the craziest thing I’ve experienced. He’s part of our family now.”

I don’t know about you, but Gutt certainly sounds like a hero to me, and Gabriel one brave boy worthy of a helping hand.