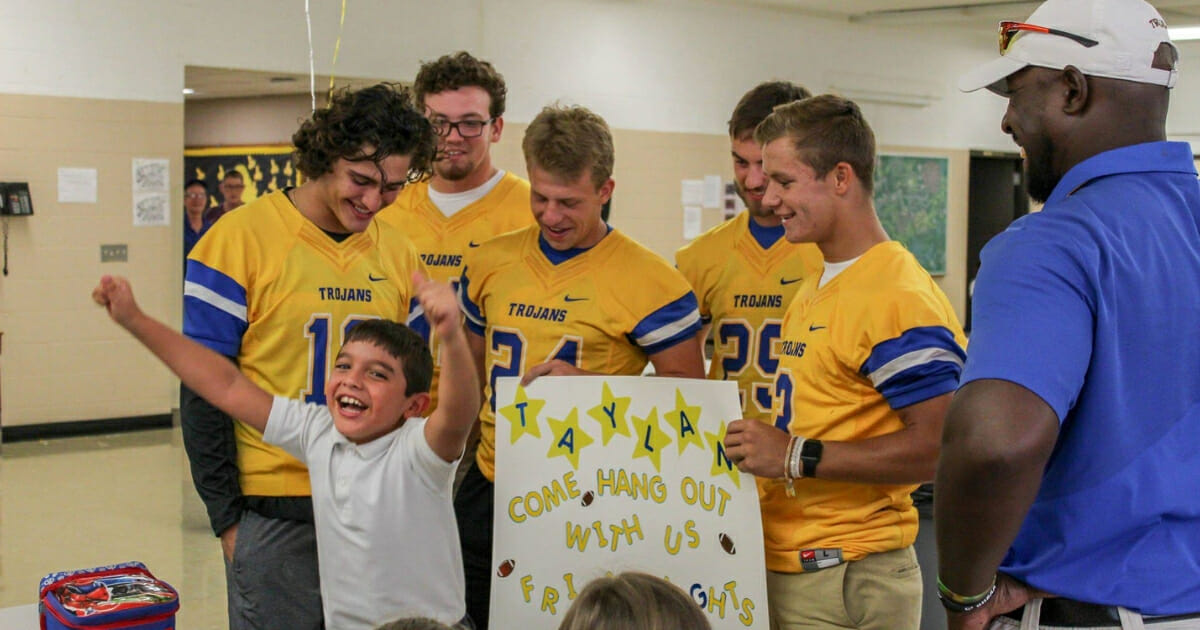 It doesn’t matter how many voices join the chorus in trying to prevent bullying, it remains a big problem in our society.

Perhaps nowhere is it more present than in schools and amongst children. It’s something 8-year-old Taylan Orton knows only too well, having left his first ever football practise inconsolable with tears.

The youngster, from Ohio, told his mom that he hated football and wanted to quit, for he’d been rendered an outcast at the session.

Carrie Wilmoth was hesitant when her 8-year-old son Taylan told her he wanted to sign up for football. Taylan has cerebral palsy, and his mom was concerned that it could effect his ability to play, and therefore leave him at the mercy of bullies.

After debating it for a time, she decided to let him give it a shot, registering her son for a team and emailing the president of the youth football league to explain Taylan’s physical limitations. She also made sure to write it on all of the necessary forms, as well as hold a conversation with the head coach of the team on the first day of practise.

I am writing this is hopes of getting awareness out. Taylan wanted to join football this year. I was reluctant to sign…

Carrie was hopeful that the coaches would work with Taylan so that he might succeed in doing what he wanted. Sadly, that wasn’t the case.

“The first thing I noticed was a kid push him out of his way. They were doing drills and Taylan was doing his best,” Wilmoth wrote in a Facebook post.

“The coaches were yelling at him because he couldn’t do them. Now don’t get me wrong I’m all for yelling at a kid not listening or slacking off. But not a child with a disability trying his best.”

Eventually, Taylan was moved to a second group because the coaches didn’t like the way he was performing. After switching groups, however, Taylan was pushed to the ground by another child.

As Wilmoth explains: “Coaches around did nothing.”

And so it was that in the middle of the next water break, Taylan approached his mom with tears streaming down his face. He threw his helmet to the ground and told his mom he hated football; he wanted to quit.

“After he was calm he said that kid told him he was a loser and was going to make them lose,” Wilmoth wrote. “I was irate and we left. Taylan cried himself to sleep last night asking why he wasn’t good enough.”

Wilmoth wrote to the president of the league to explain the situation, but was handed a series of excuses with no definitive admission or apology.

Her subsequent Facebook post didn’t go viral, but it did reach a local football coach’s wife. Emily Buckman saw Wilmoth’s post and decided to plan something that would turn his confidence around for the better.

On August 29, 2018, Taylan was surprised during lunch. Five players from the Findley High School football team came into the cafeteria holding a poster that read, “Taylan come hang out with us on Friday nights.”

For Taylan, it was a dream come true. He got pictures with the teenagers and the joy on his little face is plain for all to see.

Fortunately, a video of the surprise was posted to Facebook – one that has since gone viral.

“This means the world to him after everything that happened,” mom Wilmoth told Fox News. He was so proud of that moment that he told everyone he could that he ‘was the coolest kid in the lunchroom.’ He even fell asleep with the poster in his bed that night.”

She continued: “Friday night was the highlight of his little life. I have never seen his face so lit up. He was on cloud nine. The football players and student section and all the staff will never truly understand how much this means to him and our family!

“We are so thankful for all the support Taylan has got from everyone who has shared his post to raise awareness about bullying. Bullying is never O.K. and just because you can’t see a disability doesn’t mean it’s not there!”

Other people may be different, they may struggle or have problems completing tasks, but this is NEVER cause to mock or bully them.

In an ideal world, bullying would be eradicated forever. Since we don’t live in an ideal world, though, we need to do our best as a collective to get rid of it root and stem where we find it. We’re just thankful little Taylan was given a surprise that restored his belief in himself.

Please share this article to show you stand against bullying in any form!