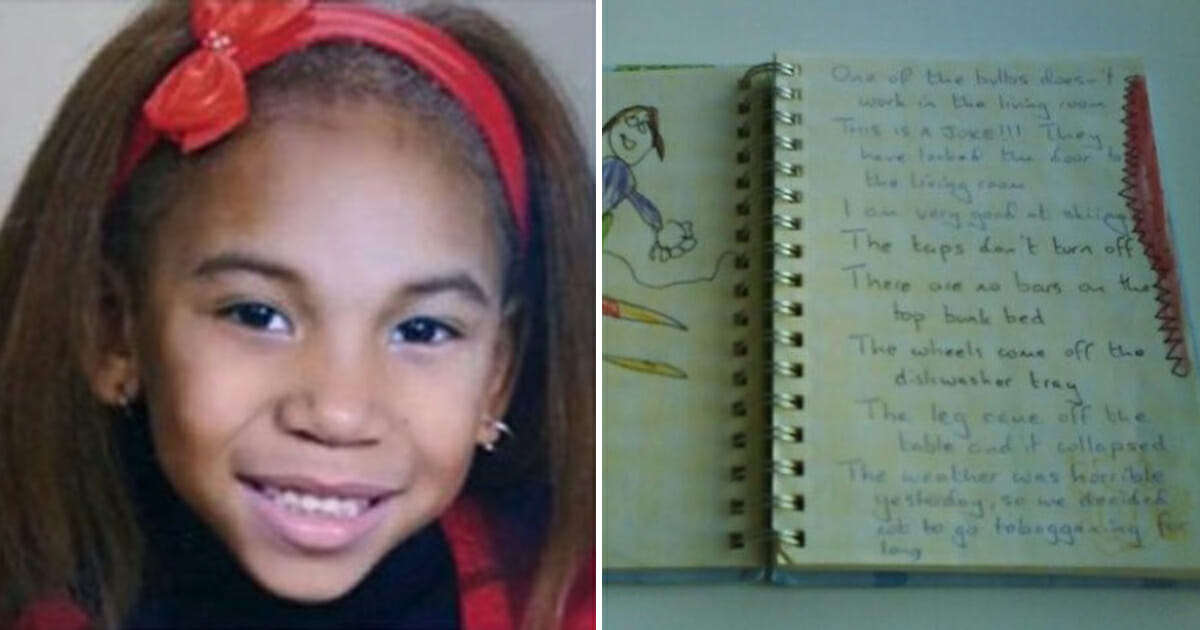 This is the story of a girl; one with a big heart and an eagerness to live life. It’s a story everyone should read. The tale of Gizzell Ford is unfortunately true, no matter how much I wish it wasn’t.

Of course, when you’re reading this, you should remember that it’s not just about Gizzell, but rather the thousands of children who are forced to suffer the same nightmare every day.

For Gizzell, things didn’t end well, but I write this in the hope that her story will be a wake up call, so that no more children have to endure this sort of cruelty.

Like many other children, eight-year-old Gizzell Ford was a happy, curious and smart little girl. She loved school and enjoyed making new friends.

As with many kids her age, she kept a diary. Only, the rows in her diary weren’t filled with love hearts and secret messages about boys she liked. Instead, the truth revealed in the pages of Gizzell’s diary is so horrible that it’s difficult to read.

On July 12, 2013, Gizzell or “Gizzy”, as she was commonly called by friends, was found dead in her grandmother’s dirty, pest-riddled apartment in Austin, Texas.

She had been beaten and strangled. On her wrists there were ligature marks where she had been bound, and on her back was a wound so infected there were maggots in it, according to the Chicago Tribune.

Just months prior to her death, Gizzell and two siblings had moved to live with her father Andre and grandma Helen. Andre had a serious condition that meant he required constant care and couldn’t look after himself.

It was Helen who took care of the family, and from the outside it looked like any other home. The pages of Gizzy’s diary, however, attested otherwise.

Every day Gizzell was punished for behaving badly. She was forced to do squats, stand in uncomfortable positions and had a dirty sock pushed into her mouth if she did so much as make a noise. She was also physically beaten, tormented and often had to make do without food or water.

On the occasions she dried to drink water from the toilet, she was beaten head to toe.

Sometimes she was tied to her bed and not allowed to move freely for several days.

And yet, despite the hell she experienced, Gizzy remained positive. In her diary, one could read that she knew she would be punished for ‘acting up’, but that she was hoping to develop into a smart and beautiful young woman.

She also wrote about how she dreamt of playing with her siblings and watching TV. Often, the diary was updated a few days later, when she would describe how she had been abused again.

The end of Gizzell’s life

Sadly, by the end of Gizzell’s life, her diary entries had become little more than jagged scrawls. Deprived of nutrition, suffering constant abuse from her grandmother and growing weaker by the second, her decline was quick and definite. Just days before her death, she is said to have written: ““I hate this life because now I’m in super big trouble.”

When Gizzell was found, her body was so degraded that jurors began to cry while hearing details of the case. The diary evidenced a hopeful young girl who loved school and skipping. It also told of the abuse that permeated her life.

Gizzell’s father died of a heart attack in Cook County Jail while awaiting trial for his role in her death. Her grandma Helen would later be sentenced to life imprisonment for murder.

Reports on Gizzy’s case confirm that something could have been done to stop things before she died. But the matter seemed to slip through the cracks. Merely a month before Gizzelle lost her life, a social worker had visited the home but failed to take action.

Please share Gizzell’s story with all your family and Facebook friends to show that no child should ever have to endure what she went through.