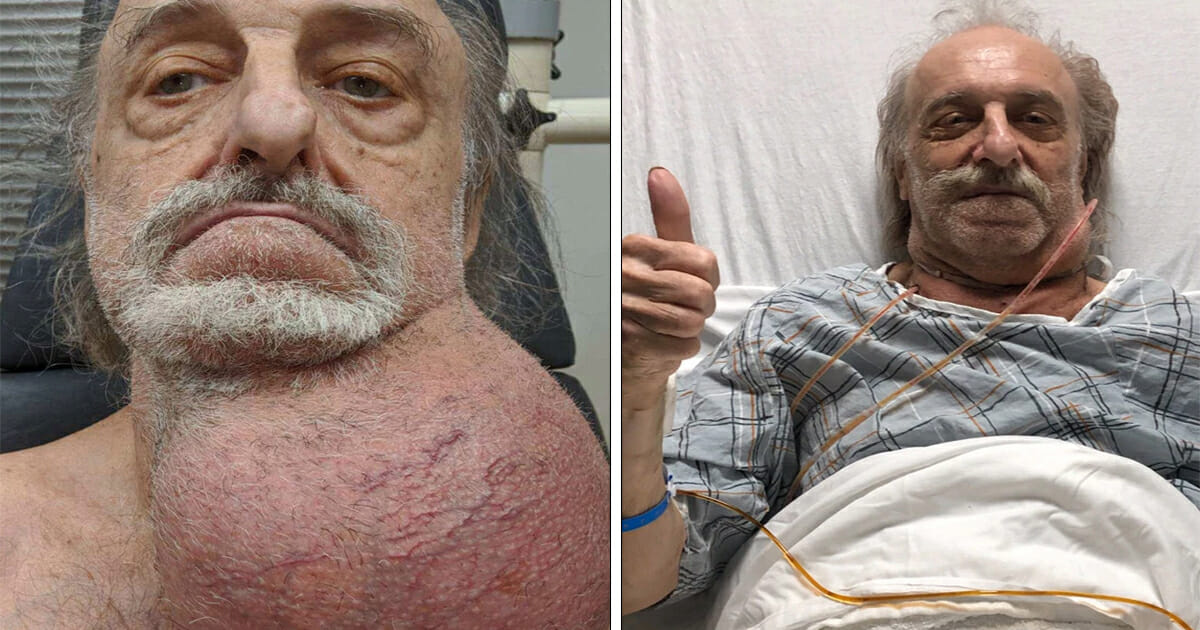 I simply can’t praise the wonders of modern science enough. It seems as though every day we see examples of medical breakthroughs and successful procedures that simply wouldn’t have been possible even as recently as twenty years ago.

81-year-old Milton Winger certainly knows a thing or two about such miracles. He was forced to watch a cancerous tumor grow on his neck over the course of six months, until it grew to be larger than his own head.

As per the New York Post, Wingert, a retired electrician living in New Jersey, said doctors turned him away for several months, concerned that touching the tumor might impact his carotid artery or clavicle.

“I was so self-conscious,” he said. “[People] would make fun of me.

“I kept seeing different doctors and going to different hospitals, and it kept growing and growing and getting bigger and bigger “I was getting worried, wondering when I was going to get that operation.”

Then, earlier this month, Winger met Dr. Nazir Khan, the head and neck surgeon at Mount Sinai Hospital. By that point, the tumor had gotten so large it was 23 centimeters (9 inches), the same dimensions as a soccer ball.

“It was the largest [tumor] I’ve ever operated on,” Khan said, as per the NY Post. “It had caused him significant quality of life [issues], so I felt sorry that it had gotten to this point.”

During the surgery, thoracic and vascular surgeons were on stand by in case complications ensued.

Fortunately, all went well, and though Winger will likely require further treatment in the form of radiation or chemotherapy, he should be out of hospital soon.

“I’m going to celebrate my 82nd birthday. It’s a miracle.”

Wow! What fantastic news that Winger was able to have the mass removed. A huge well done to Dr. Nazir and the entire team that undertook this procedure.

Now, we’re wishing Milton Winger all the very best in the future.

Share this article if you, too, want to send your prayers!