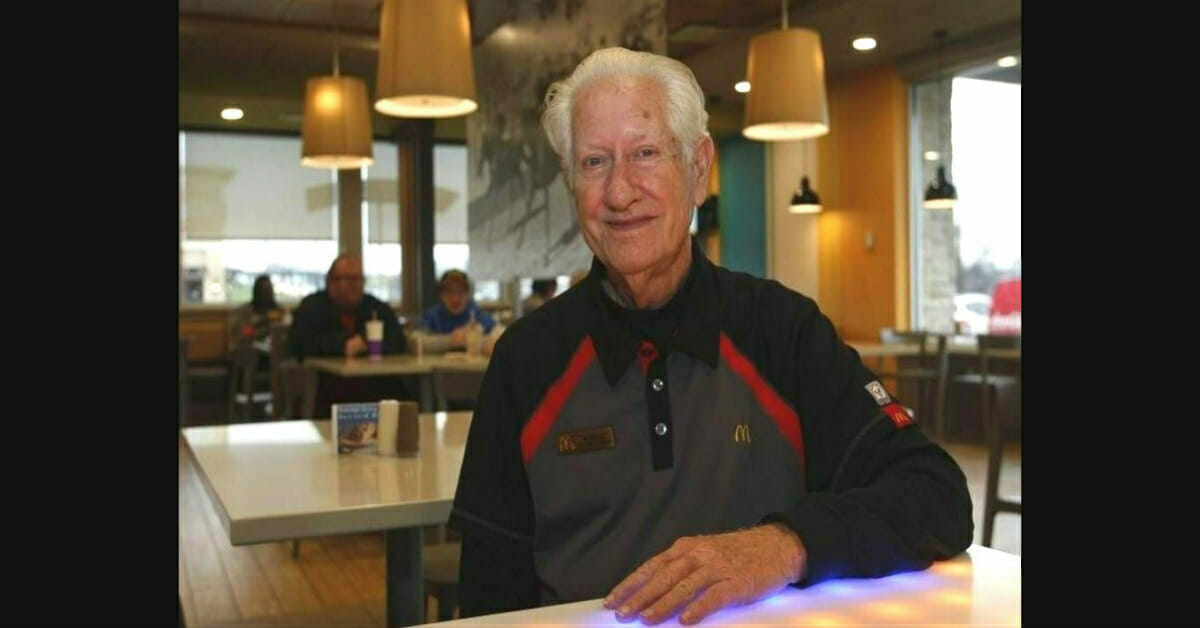 If there’s any group of people who deserve to be praised and given allowances by society, it’s our elders.

After all, they’ve worked their entire lives to build the country we have today, and it’s not just in the USA that there’s a lot to thank our pensioners for.

I can’t imagine what the world would look today had millions of men and women not stood in staunch opposition to the tyranny of Adolf Hitler, for example.

85-year-old Wendall Gill is one of those who has contributed to society in every single way. For over 40 years, he’s worked in the same McDonalds restaurant in Kentucky, and worked hard. During that time he’s forged close relationships with staff and workers – all the locals know who he is.

The fact that he’s been an employee of the same company for such a long time offers a window into Wendall’s sense of pride and loyalty.

Most people his age retired a long time ago, but Wendall continues to serve burgers and fries.

One day, his friend Todd Oldfield – who used to work at the same McDonalds – asked why Wendall didn’t just retire and enjoy some peaceful years of quiet.

When Todd learned the truth, however, he couldn’t believe his ears – he then understood just why he had to act immediately.

Todd met Wendall for the first time in 1978. At the time, Todd was little more than a kid. He worked extra shifts at McDonalds as a way of making some money, but it was his first real job.

Wendall, meanwhile, was a middle-aged colleague who was trying to fit the pieces of his life together.

“I met Wendall in June, 1978 when I went to work for my first job; McDonald’s on Richmond Road, in Lexington, Kentucky. Nearly my first day I met Wendall; the man that kept the lobby of the store clean. If ever you have been in this particular McDonald’s I am sure you have seen him,” Todd explained.

Like everyone else, Wendall has a lot of bills to pay. However, he also has other financial responsibilities that most don’t have: Two adopted, disabled grandchildren that he supports.

For 68 years, Wendall was married to the love of his life, Della. She was always by his side, helping him and forming one half of a genuinely loving relationship. One day in late August, though, it all changed.

“I saw him recently when I stopped in for breakfast. “Wendall, how are you?” I asked. With two boys watching the conversation from a nearby table Wendall paused and told me he had lost his wife recently, suddenly. Boom! He had told me of his wife Della (age 83) many times in causal conversation.

“They were happily married for more than 68 years (almost unheard of today). Della was his swan; his soul. Wendall is devastated; lost; totally empty now. Nothing is left (but he still has to be strong).

“This is fresh. It just happened. The story gets worse though. It turns out that she and Wendall had run some errands early on of Wendall’s few days off and they stopped by the McDonald’s Wendall works in for an early meal and the poor, sweet lady went to the rest room, and had a stroke caused from a bursted aneurysm while in there. Paramedics were called and they came. They ran her to the closest hospital, and she managed to live only a day or two; but never woke and died in late August.”

But that wasn’t the worst of it.

The love he has for his two adopted grandchildren is what keeps Wendall strong. Both boys have special needs and are dependant on him to cope.

33-year-old John has autism, whilst 20-year-old Justin suffers from Fetal Alcohol Syndrome, a condition that occurs when a woman abuses alcohol during her pregnancy.

Unfortunately, Wendall’s income is low, and not enough to support the three of them. With wife Della gone, there’s no one around to even take care of the household.

For Todd, the circumstances were too dire to simply ignore. He started a collection effort to raise money for Wendall and the boys.

The goal was to raise enough money for Wendall to buy a proper headstone for Della’s grave, as well as pay the remaining loan off on two cars.

“He is 85. He needs to retire. He really needs to worry about the boys… and not does he have enough money to live off of in his McDonalds job. I want him to quit worrying and have some time to grieve. He is so sad. And, once he is gone, I want to know that these boys have a place to live,” Todd writes.

Thanks to the power of social media, the income from donations currently stands at an incredible $68,000. Todd has been able to pay off the money owed for the van Wendall and his grandsons use, as well as pay for a proper headstone for Della and get rid of the debt from the cars.

Now, in any case, Wendall has less to worry about. Isn’t it amazing what the power of human connectivity can achieve?

This selfless man spent his entire life’s earnings to help others. Now, he’ll finally have a chance to relax and enjoy himself.