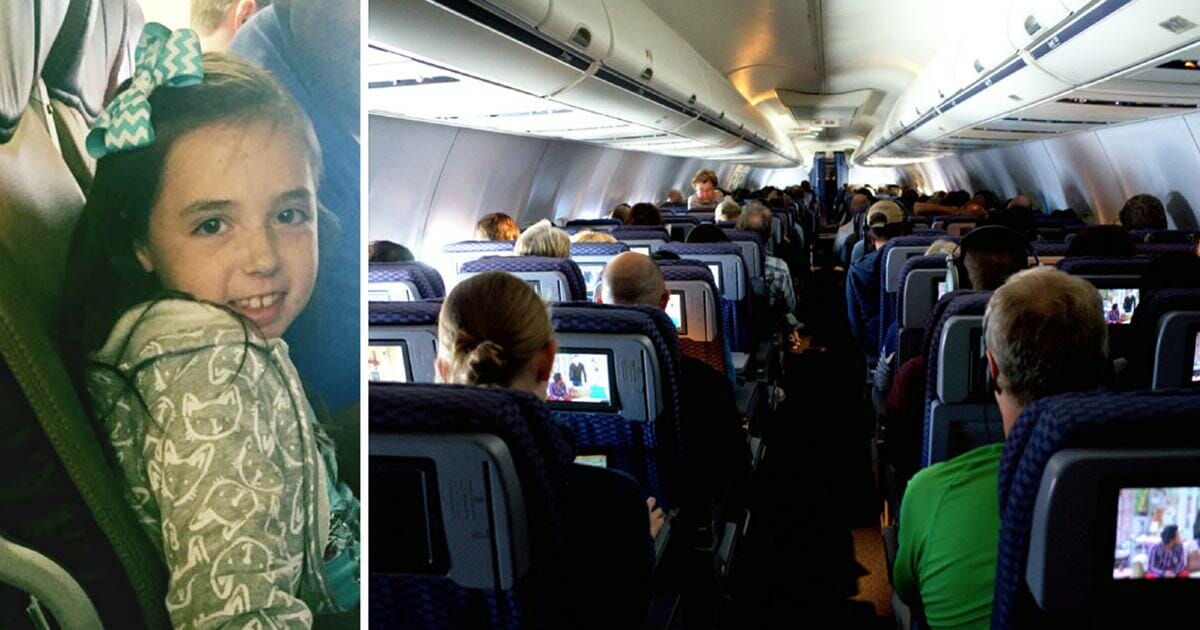 It doesn’t matter if you’re a child or an adult; there are millions of people who get uncomfortable when it comes to flying. Perhaps it’s the idea of being trapped in a small space full of strangers? Perhaps it’s anxiety over the plane taking off and landing safely? Perhaps it’s the simple thought that you’re flying thousands of metres above the earth in a small tube of metal and have no control over what happens?

No matter what the cause of a person’s troubles, sometimes there’s no other option than to get on board, suck it up and deal with it. That’s not to dismiss the fact that it can an extremely hard thing to do.

9-year-old Gabby had flown since she was a little girl and was never particularly afraid about taking to the skies. So when she suddenly became panic-stricken on a trip between Orlando and Newark, her mother, Erika Jeorgean Swart, was at a loss.

Erika didn’t consider the idea that her daughter would be bothering other passengers in her distressed state, but soon enough a flight attendant arrived with a “special drink” to keep her quiet. As soon as they landed, Erika took to social media to explain what the flight attendant had given her daughter …

On that particular day, Erika flew alone with her three children. She had no problem keeping an eye on them, but she wasn’t prepared for how 9-year-old Gabby would suddenly react after leaving the tarmac.

It wasn’t long before Gabby began to grow panicked. The girl, who suffers from diabetes, did her best to keep calm, but she was fighting a losing battle. Unfortunately, her blood sugar levels began to drop soon after.

Mom Erika could see the raw fear in her daughter’s eyes – what was she going to do?

And then, as if from nowhere, Erika watched as a flight attendant approached the girl. The cabin crew member had apparently concocted a “special drink” for Gabby.

Erika took a picture of the man in question so that his airline, Southwest Airlines, could easily identify him.

But this wasn’t to get him disciplined. No, on the contrary, she wanted to pay tribute to the man for what he’d done for her daughter.

It turned out the man, Garrick, had watched the girl struggling to be calm and collected. He had gone straight to her, and then returned throughout the flight in an attempt to calm her nerves.

“Throughout the flight he tried making her laugh and bringing her special drinks,” Erika wrote in a Facebook post to Southwest Airlines.

He suggested they talk to distract her from thinking about the landing so they talked for around 30 minutes about everything from his daughter who is the same age to her pets to what grade she is going into. During extremely rough turbulence she began crying and grabbed his arm, he gently told her she could hang on as long as she needed to. Just after this due to the extreme stress she was under her blood sugars began dangerously crashing. He got up from his seat to get her an orange juice and came right back to sit with her.”

Fortunately, Garrick knew exactly what he was doing. He sat in the seat next to the 9-year-old and joked, laughed and otherwise took her mind off the anxiety. Thanks to his incredible efforts, the flight passed without major incident.

“Once on the ground while taxiing to the gate he came on the intercom and announced that his friend, Gabby, in the front row overcame her fears of flying and asked for a round of applause. The whole plane clapped for her. It was a wonderful experience on Southwest. We are forever grateful to have met such a beautiful, selfless soul.”

What a wonderful attendant Garrick is! What a fantastic story to warm the heart.

Hit the SHARE button to spread this incredible tale and pay tribute to flight attendant Garrick, who did everything in his power to make this trip more comfortable for both mother and daughter. Such heroes must be championed!