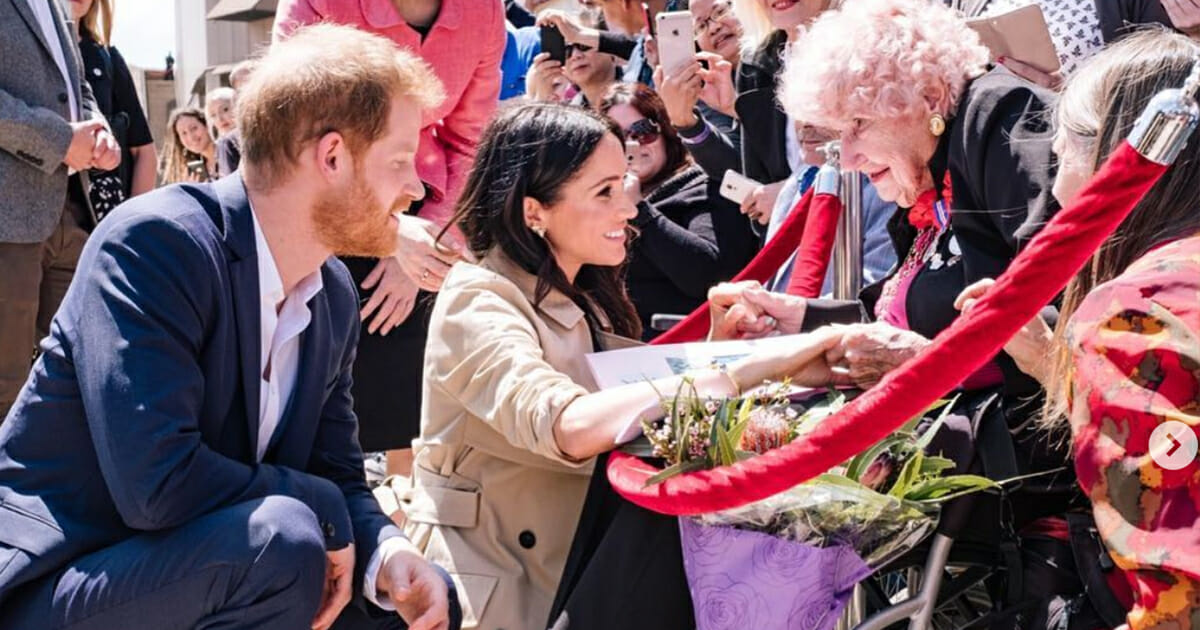 Prince Harry enjoyed a heartwarming reunion today as he introduced pregnant wife Meghan Markle to the 98-year-old war widow who twice stole a kiss from him.

According to the Daily Mail, Harry and Daphne Dunne were reunited today, with Meghan Markle warmly clasping the lady’s hand and telling her she’d heard ‘many good things’.

Daphne captured the hearts of the world when she first met the prince in 2015, and then again in 2017, when she waited in the pouring rain wearing her late husband’s Victoria Cross war medal.

The medal caught Harry’s attention on that occasion, and the pensioner stole a kiss when he leaned in to ask her about it.

The scenes were joyous today when Prince Harry and Meghan Markle – fresh from announcing their pregnancy news – began the first full day of their tour.

98-year-old Daphne Dunne was eagerly waiting to greet the couple with a bouquet of flowers outside the Sydney Opera House as they made there way to a reception.

Daphne, who in 2017 stuck around in the driving rain to meet Prince Harry for a second time, was married to Albert Chowne, a soldier posthumously awarded the Victoria Cross after he died in Papua New Guinea during the Second World War.

Much to her delight, the prince spotted her again in the Sydney crowd and ensured that his wife could meet her too.

As per the Daily Mail, Prince Harry said: “How are you? I’m going to get my wife to come over to say hello.”

“Oh my goodness, is this Daphne?” Meghan went on to say, clasping Daphne’s hands. “I’m so happy to finally meet you. I’ve heard so much about you – all good things.”

Beaming parents-to-be Prince Harry and his wife Meghan have won over Sydney with a royal charm offensive. #9News https://t.co/toFgLWOUcl

Daphne replied: “It’s wonderful, the two of you,” congratulating the pair on their baby news. “Congratulations, it’s just what Harry needs.

“He will be a marvellous dad. He won’t let anything stand in his way and he will be so gentle and loving.”

Daphne, a fan of the royals, handed the Duke and Duchess of Sussex a bouquet of flowers, having also brought the previous pictures of the times she met Harry with her for the occasion.

What a truly inspiring couple Prince Harry and Meghan Markle are. It clearly means a lot for Daphne to see Harry again, so it’s great he not only recognized her but also took the time to acknowledge it.