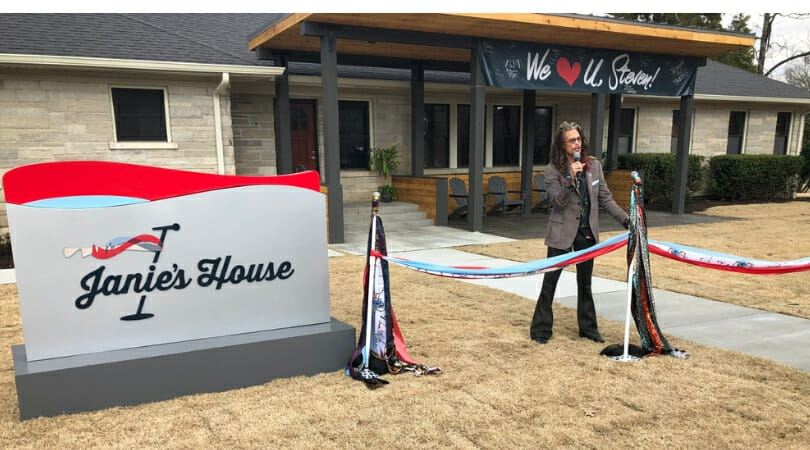 When it comes to bands that have stood the test of time, Aerosmith are up there with the best of them.

There’s a reason some people have immortalized Steven Tyler and the others, and it goes beyond pure musicianship.

I’ll admit to being a big fan, which is why I was delighted to learn what Tyler is up to now. With all the fame and fortune he’s amassed over the course of his long career, it would have been a simple thing for him to kick back and enjoy the rest of his days.

It turns out, however, that he’s focusing his energy on a project that almost everyone will be able to appreciate. It’s called “Janie’s House”, and it’s rather special indeed …

The Aerosmith frontman has helped to establish a home for abused and neglected girls, and even donated $500,000 towards the renovation of an suitable 82-acre building located just outside of Memphis.

This project started years ago, when Tyler visited a treatment center and then realized that he wanted to do something to help all the abused and neglected girls he was meeting.

“All the girls I met had been abused either physically, mentally, verbally, you know. At least 90 percent of them all,” Tyler said, according to LocalMemphis.com.

Named “Janie’s House” after Aerosmith’s hit 1989 song “Janie’s Got a Gun”, these houses will aim to provide a safe space for those women who have nowhere to go.

The first Janie’s House was opened in Atlanta in 2017.

It’s said the home’s main goal is to raise awareness of neglect and abuse as serious issues, whilst generating financial support to see that victims are given the proper channels to help them overcome any trauma they might be facing.

The home fosters 14 girls at a time (between 26 and 60 annually), and promises to shelter them for as long as they need help.

As well as supporting the homes, Tyler has also created “Janie’s Fund”, which has raised around $4 million in total since its opening.

“I’m gonna bring this Janie’s Fund with me wherever I go. It’s like a dream come true,” Tyler said.

It really is great when your icons turn out to be real-life heroes as well.

Steven Tyler may have experienced his own problems in the past, but he remains inspirational as ever!

Share this article to pay tribute to Steven and his incredible work.