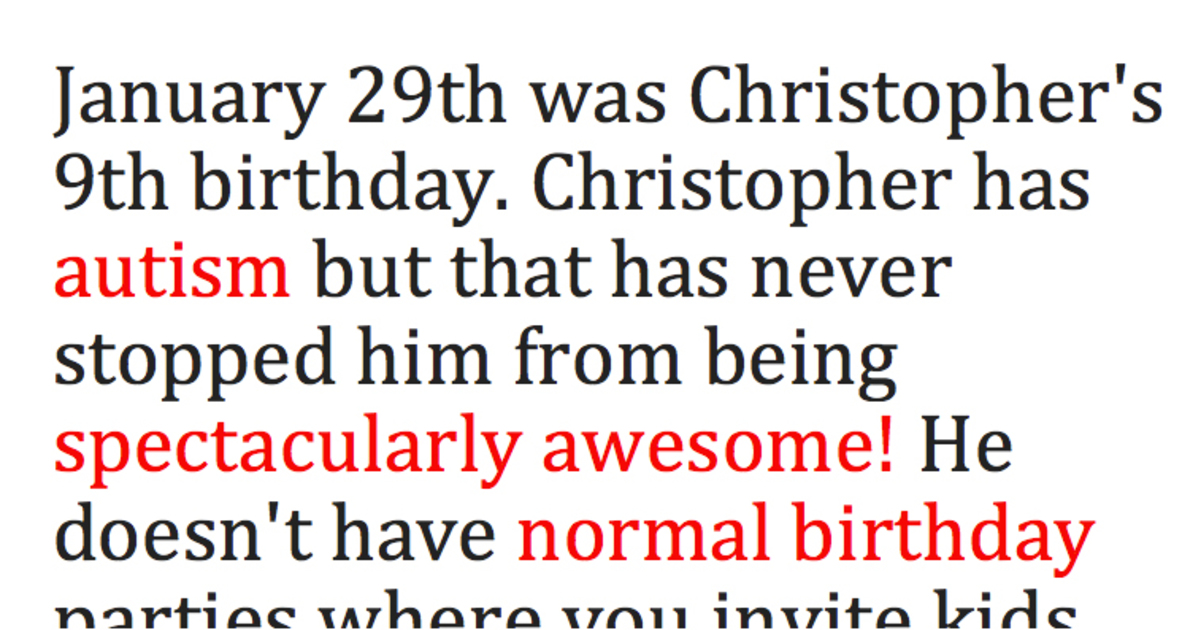 Now and then, we come across regular folk who do exceptional things that restore our faith in humanity. When one mom and her autistic son Christopher recently went shopping for his 9th birthday gift, they encountered a moment just like that. Read the moving story below.

Here is the mother’s touching story:

January 29th was Christopher’s 9th birthday. Christopher has autism, amongst some other issues, but that has never stopped him from being spectacularly awesome! He doesn’t have normal birthday parties where you invite kids from school or your friends because he doesn’t have any. Instead of a party, I took him into GameStop to pick out some birthday presents. As we were walking around, Christopher kept yelling out ‘It’s my birthday!’ And ‘I’m the birthday boy!’ I’m a known regular in the store, the assistant manager, Chris, and I exchanged hellos and I proceeded to help Christopher pick out his birthday stuff. We get up to the register and Christopher exclaimed yet again, ‘It’s my birthday! I’m the birthday boy! I am 9!’ Chris smiles at him and tells him happy birthday, then Christopher told him that he doesn’t have birthday parties because he doesn’t have friends because kids think he’s weird. I didn’t think Chris heard him, so I repeated it and he just looked at Christopher and said that getting presents and hanging out was so much cooler anyway. After we finish the purchase we were getting ready to leave and Chris says ‘hold on one minute buddy!’

And he grabbed an Iron man Lego minifigure that came with the preorder of Lego avengers. Chris handed it to Christopher and told him Happy Birthday! We both said thank you and walked out of the store. As I was helping Christopher buckle his seatbelt, I noticed he was starting to cry, I asked him why. He said that he was so happy that Chris had given him the Iron Man. That a lot of people aren’t that nice to him, and he was really happy that Chris was nice to him on his birthday. So fast forward to about a week later. I get a phone call from the district manager of the Chesapeake region of GameStop, Matt. He wanted to talk to me about mine and Christopher’s experience. Then he says that he along with some other managers in the area will be at the store in town on the 18th and how about we just have a party for him then and celebrate his birthday a little bit late and that way he will always know that he has friends at GameStop.

I was shocked and excited for Christopher. I thought what an amazing experience this will be for him. And just the absolute kindness that these people are doing for my son. That nobody had to do any of this. Everyone who works there is truly amazing. So last night, was Christopher’s birthday party at GameStop. And we had so much fun! And just to see the pure happiness on that boy’s face just made my heart so happy! So I could not have asked for anything better than what my son got last night. And not just the cool things that they gifted him, but the memory and the experience. That is the best gift of all. So thank you to every single person who was there last night. You have no idea how much you all made his day.

I truly cannot ever thank you all enough.

Share this mother’s moving words if you agree what the shop personel did was amazing.