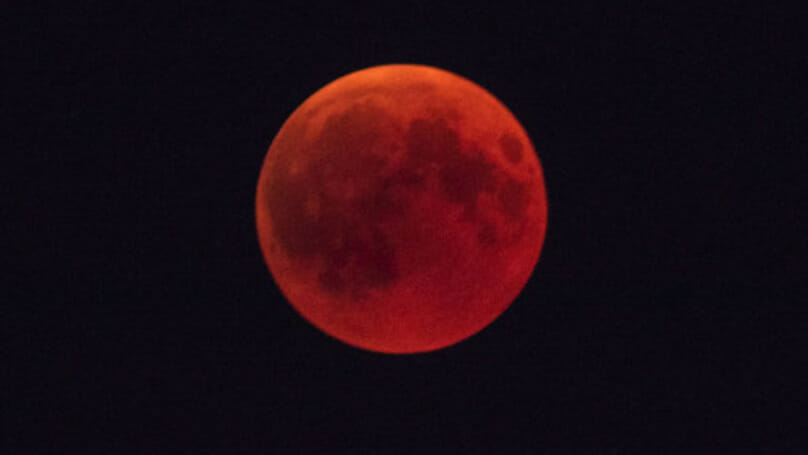 This weekend half of the world will be able to witness a spectacular ‘Super Blood Wolf Moon‘ total lunar eclipse (a mouthful, we know), according to reports.

Forbes claim that Sunday night is the night to turn your eyes to the sky if you live in North and Central America, whereas for South America and large parts of Europe, the spectacle will occur in the early hours of Monday morning.

Fred Espenak, a retired NASA astrophysicist and eclipse expert, said: “It’s perfectly placed for the Americas and Western Europe, and we will see the entire event from start to finish.”

What does the blood moon mean?

For anyone else wondering what a ‘Super Blood Wolf Moon’ is (yes, you’re not alone in your confusion), the event will see the moon pass into the Earth’s outer penumbral shadow, losing its brightness.

After this, the moon will enter the inner, darker ‘umbral’ shadow of Earth and thereby begin to be eclipsed. This results in some of the moon turning red in colour.

Espenak advises using a pair of binoculars or a small telescope to watch the spectacle, though the partial phases can be seen by the naked eye.

Now, if haven’t got time to watch the whole thing, it’s the totality of the ‘blood moon’ that Espenak says is worth seeing. “The best part of the eclipse is during the 62 minutes of the total eclipse. The Moon is then bathed in a beautiful red hue produced by sunlight filtered through Earth’s atmosphere.”

As per AccuWeather, the first phase of the eclipse will begin at 9:36pm EST, though the totality phase (the exciting part) is expected to begin just before midnight and last for around an hour.

@TomAckermanWx Will we be able to see the "Super Wolf Blood Moon" Jan. 20 in Kentucky? pic.twitter.com/e0BQGLbM2g

Share this article on Facebook to make sure none of your friends and family miss out on this spectacle!