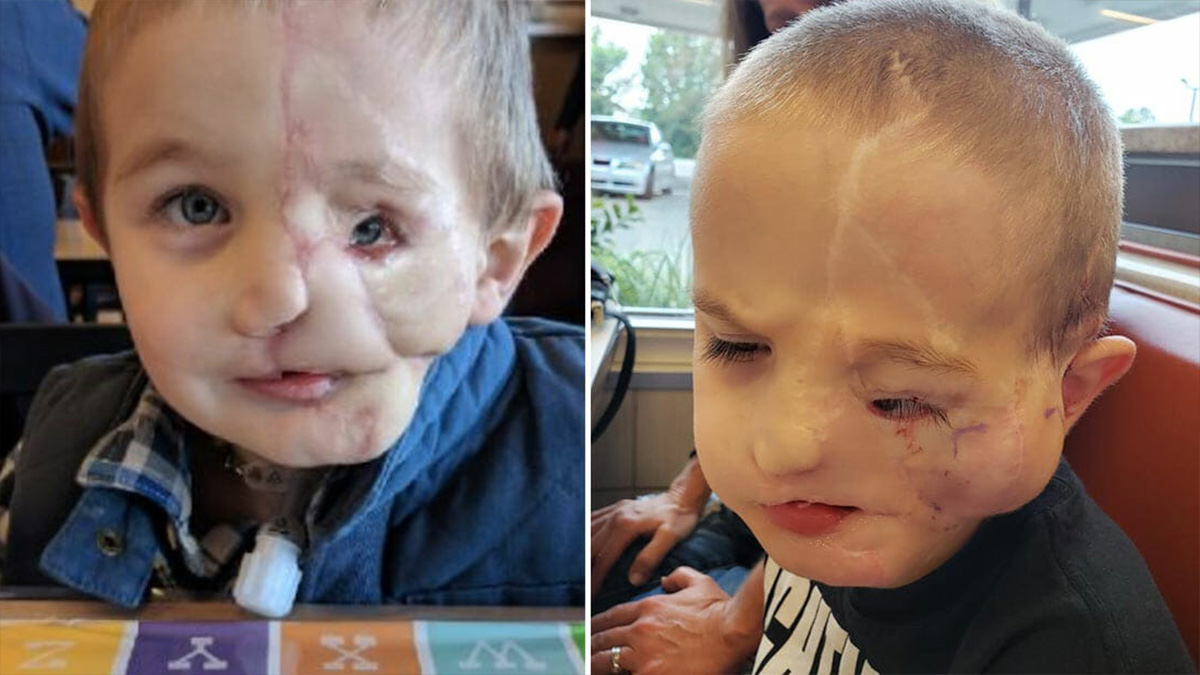 At just five years old little Ryder Wells has been through more horror that most would experience in a lifetime.

Against all the odds the youngster from North Carolina survived a brutal attack by two rottweilers while visiting family for Thanksgiving in 2015.

He was just 21 months old when the two 100-pound dogs attacked him. He lost half of his face, his teeth were crushed, and he suffered a broken arm and punctured lung.

His family didn’t think he would survive but this little fighter made it through and has since had to endure around 50 surgeries.

Instead of being praised for getting through such a horrific attack this sweet little boy now has to endure cruel comments from children and adults.

His teaching assistant said when Ryder first started school even the adults would stare at him.

“When we go to the park, there’s a child who points and screams ‘monster’ at him before running away.” mom Brittany said, according to The Mirror newspaper.

“Out shopping the other day someone shouted ‘ew’ at him. It’s hard and it breaks my heart as a parent that after everything he’s been through, people aren’t always nice over something he can’t help.

“But he is such a fighter, he doesn’t let anything hold him back.”

Ryder’s survival is described as a ‘miracle,’ as even doctors didn’t expect him to make it.

Now the 31-year-old mom from Granite Falls is scared of her son starting school.

“He wears glasses and a cap and sometimes he’ll hang his head to hide his face. But I just tell him every day that he’s beautiful, different is beautiful and it’s ok to be different.

“I just reassure him as much as I can but I’m absolutely terrified about when he goes to school. There are always going to be a couple of kids who aren’t kind.”

Now she wants to raise awareness about the effects bullying can have on someone with a facial disfigurement and hopes Ryder’s story will make people think twice about how they treat those who look different.

We must teach our kids to not single out those that look different and be kind to help children like Ryder live the happy life they deserve.

Please share to show your love for this little boy and let him know he is beautiful both inside and out.