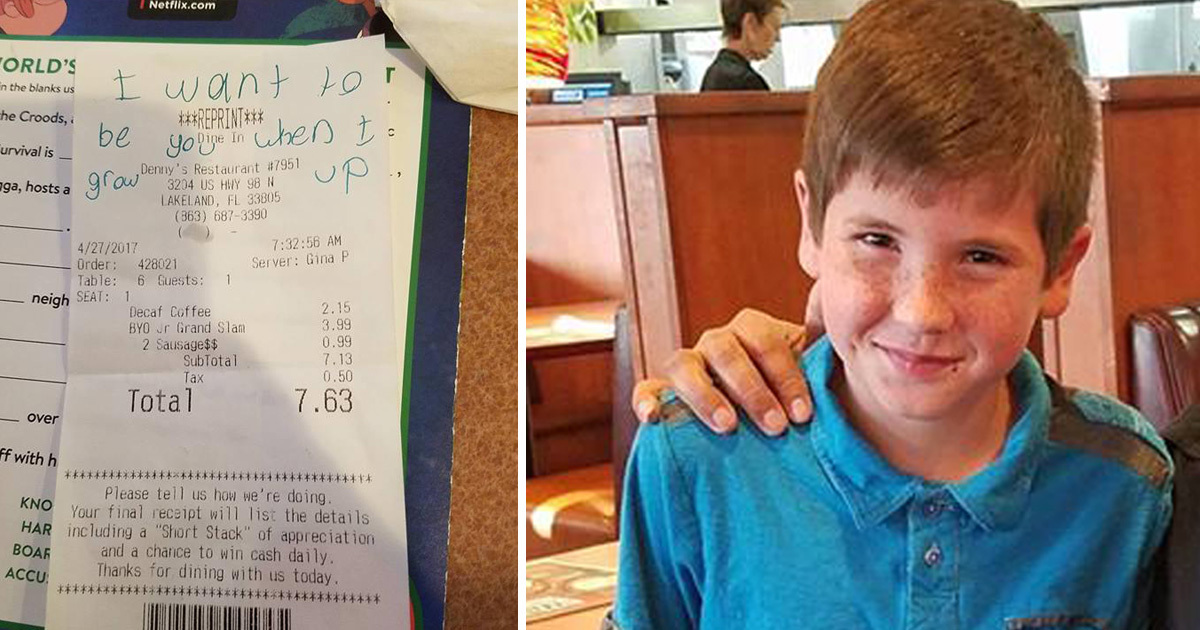 Back in April, police officer Eddie Benitez went to a restaurant in Lakeland, Florida to have breakfast. But little did he know that sitting at another table was a little boy with an important message for him.

The boy was shy and didn’t dare speak directly to officer Benitez, so he wrote him a message on his receipt instead.

When officer Benitez read it, he jumped up out of his seat and went straight over to the boy and his mother.

While nine-year-old Noah was eating breakfast with his mom that day, he saw police officer Eddie Benitez at a nearby table. The boy got nervous and didn’t know what to do. He wanted to talk to officer, but he didn’t know how to approach him.

Noah’s mother, Amanda Cantin, wondered why her son was so interested in the police officer. Then, Noah told her that he wanted to say something to say to the officer, but he was too shy.

But soon, Noah got an idea. He had saved his birthday money and decided to use it to pay officer Benitez’s bill. Noah’s mom helped her son talk to a waiter, and soon they had officer Benitez’s receipt in their hands. Noah wrote a message on it and ran up to officer Benitez and laid it on his table.

When officer Benitez read what Noah wrote, he was instantly moved. The note said, “I want to be you when I grow up. Thank you for your service.”

Noah and Amanda saw officer Benitez look surprised as he read the message. A second later, he was at their table.

Officer Benitez thanked his young admirer and asked to take a picture with him.

“It meant everything. It meant that I’m supposed to wake up every morning and put on this uniform and go out there and do what I do. You know? It means that I need to keep trying to be a good example to all these young guys,” officer Benitez later said.

Noah has dreamed of becoming a police officer for the last four years.

“I’m going to make the world a better place and capture the bad guys,” he told Inside Edition.

The entire Lakeland Police Department was so impressed by Noah’s nice gesture that they posted a picture on their Facebook page to pay homage to him.

Isn’t it wonderful that Noah used his birthday money to thank Eddie for doing a good job! Please share this article if you also think that the police deserve more appreciation!