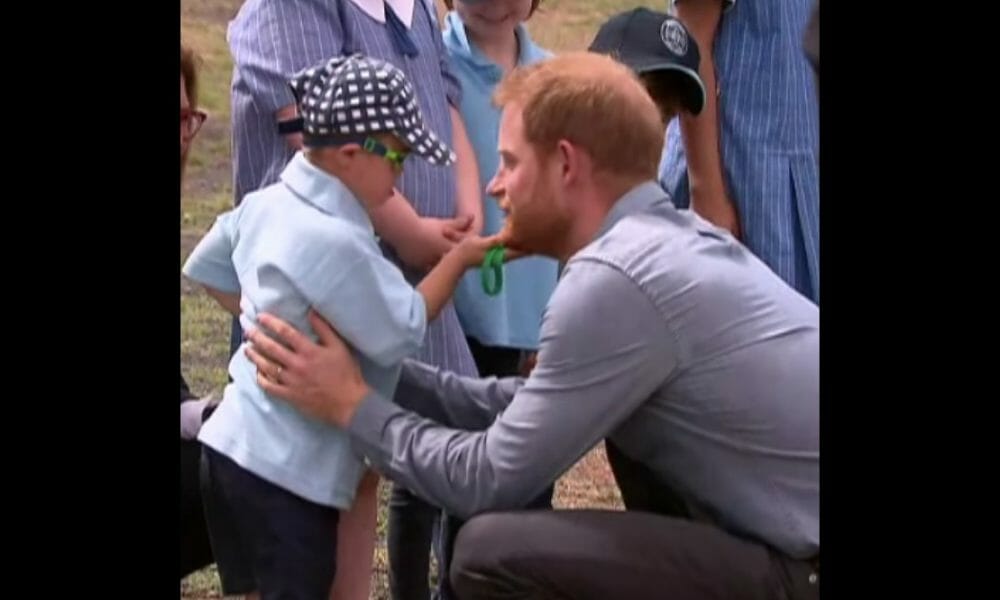 Prince Harry and his elder brother Prince William have hearts of gold, so it’s no wonder that people flock to see them whenever they make public appearances.

Prince Harry and Meghan Markle, fresh from their exciting pregnancy announcement, are currently on a royal tour that sees them travelling around Australia. There, the couple’s popularity has been no small matter. Numerous stories have been birthed by their appearance in Sydney, and it appears that their trip to visit school children in Dubbo has been no different.

The couple made their way down the field as usual, saying hello to the eager children lining up to meet them. It was then, though, that one child broke rank and walked into the prince’s path …

Five-year-old Luke Vincent has Down’s syndrome, and his favorite person in the whole world is Santa Claus. It makes sense then, that when he saw Prince Harry’s beard he wished to touch it.

Exemplifying the tenderness that his mother was so famous for, the prince knelt down to be at Luke’s eye level. Luke gave Prince Harry a big hug, before stroking his beard. Harry, meanwhile, simply laughed.

The prince then introduced his wife, Meghan, with the adorable Luke handing her a bouquet of flowers and a big hug.

It was clear, simply from the looks on Harry and Meghan’s faces, that the boy had left a lasting impression.

The royal couple have once again received international attention for their brilliant handling of an unexpected situation. It’s so refreshing to see royals who are so down to earth and in touch with the people!

Prince Harry and Meghan Markle continue to follow in the footsteps of Prince William and Kate Middleton in stealing the hearts of the world. Long may it continue.

If you’re a fan of Harry and Meghan, share this article to show your love!