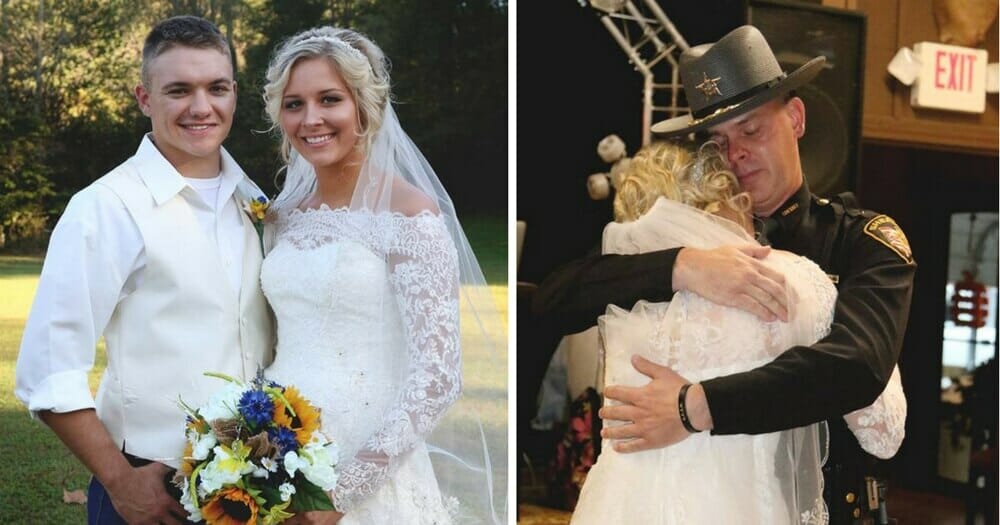 We all look forward to our wedding day.

What’s not to like about a day specifically organised to deliver the utmost feeling of love, with your family and dear ones gathered about you. Everyone’s happy, everyone is reading from the same page, everyone can have a good time.

Of course, a bi-product of having all those you care about around is that you start to miss the ones who aren’t there. Those souls who rightfully should be in attendance but have already left the world.

That’s how it was for Mikayla, a bride who was to marry her husband Dakota on October 14. With the sun shining and the formalities set in place, there was but one problem for her; her father wasn’t there.

Mikayla’s dad, David, had been a marine before becoming a probation officer. He tragically died in the line of duty ten years before his daughter’s wedding, and so he wouldn’t be there for the father-daughter dance that usually takes place.

Whilst in service, David had attempted to stop a young man one day on a crowded street. When the suspect fled from him, David chased him down to the Ohio River. The suspect jumped in and so Mikayla’s dad followed him. Unfortunately, he never resurfaced and his body was recovered the next day.

Mikayla knew she would have to pay a special tribute to him on her wedding day. She carried a bouquet of flowers that contained a medallion reading ‘Walk with me today, Daddy’, but little did she know his former colleagues had a surprise for her – one that ensured she won’t ever forget her magical day.

When it came time for the father-daughter dance, officers made their way to Mikayla’s side. They’d done their own planning to make sure she wasn’t ready for what was to come, and proceeded to take turns to dance with her in her father’s stead.

The resulting video is certainly one to watch. Not only does it move almost everyone in the room to tears, but it’s also obvious to see how much of an emotional impact it had on both Mikalya and her husband David.

Watch the fantastic video of Mikayla’s dance below:

Well that’s certainly got the water works going. What a special thing for those officers to do after ten years.

Did you like this video? Did you tear up watching Mikayla’s father-daughter dance? Share this story if so!