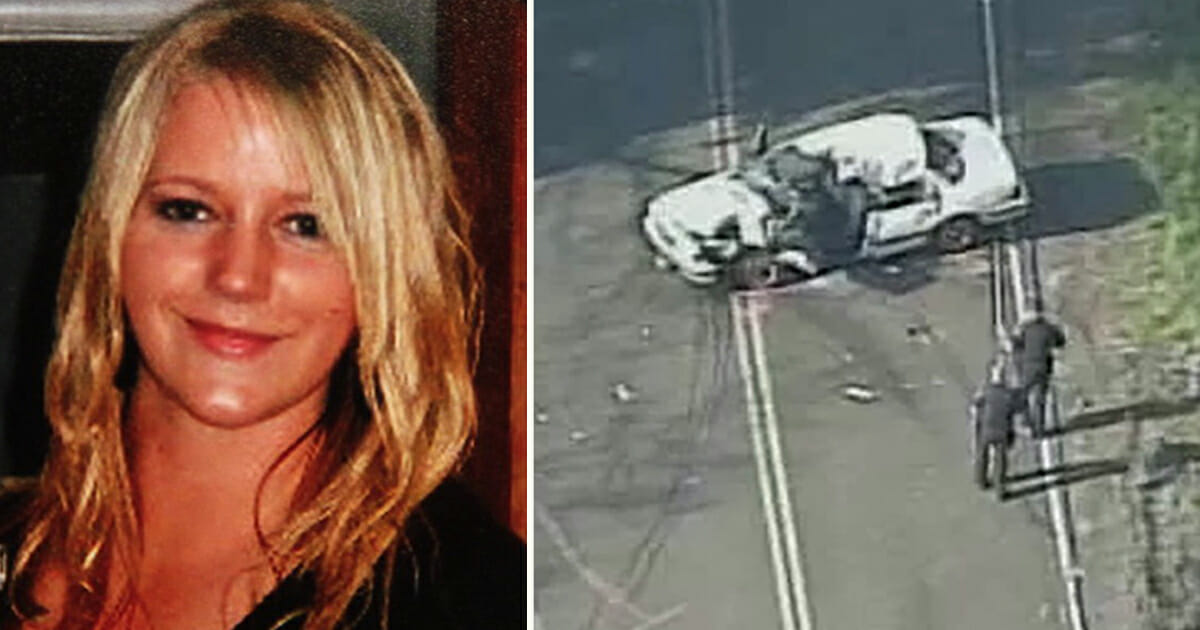 It was just another day for Cayla Wilson when she jumped into her white Buick and turned the key to start.

She was in the fifth month of her pregnancy and on her way to one of several job interviews – she was hoping to soon start extra work as a cleaner.

But tragedy would strike on that fateful day in April, 2010.

What Cayla didn’t know when she drove in her car was that drug addict Jack Whiteaker, high on methamphetamine, was also on the road – driving on the wrong side.

Cayla had no chance to spot the danger before it was too late. Whiteaker crashed head on into Cayla in a big jeep.

The wreckage of Cayla’s car showed just how forceful the collision was. There was barely anything left of the front end. When paramedics got to the scene, Cayla was unresponsive. She was rushed to hospital, where doctors deduced quickly that she had a 1 percent chance of survival.

But, in something of a miracle, they were able to keep the 19-year-old alive.

However, Cayla ended up in a vegetative coma – she could not move, nor communicate with anyone.

It was a condition she was likely to remain in, doctors told her family. Cayla was unlikely to ever properly wake up.

Her child was delivered through acute caesarean section, five weeks later. Her daughter, JaiKyle, endured a tough start to life.

The trauma from the crash meant that she suffered severe brain injuries.

Cayla would stay in hospital for a further six months and then spend another 18 months in rehabilitation.

Blood samples taken from Whiteaker showed that he had a near-lethal amount of meth in his body when he hit Cayla.

The police who arrived on scene also realised another terrible truth when they looked into the wreck from the accident; Jack Whiteaker was a familiar face. It soon became apparent that Whiteaker was on conditional release for drug related offences, but was not attending the meetings that were the conditions of his freedom.

A police officer in Portland had encountered Whiteaker on two occasions the day before the accident with Cayla, but had not arrested him.

What made the case even more outrageous was that Whiteaker didn’t show a speck of remorse during the entire trial. On the contrary; he shouted at the family during the closing statements. He was handed a sentence of just 11 years.

In a recorded phone call from prison, to his mother, Whiteaker complained that he would miss cigarettes and women during his term. He also said he hoped Cayla would remain comatose for the remainder of her life.

Cayla and her daughter received $9.3 million in damages from Portland and Clackamas County, since the authorities failed to apprehend Jack Whitaker when they had the chance. At that time it was the largest amount awarded from the state to a person in Oregon.

After legal fees, medical bills and other expenses, $4.6 million was transferred to a fund for Cayla and JaiKyle Wilson.

None of the money passed to parents Denise and Bill Wilson, except a small sum each month for their roles as permanent guardians.

As the years passed by the family fell into great financial difficulty. In the end, the pressure became too much, and Denise and Bill, who had cared for their daughter around the clock for so long, separated for more than a year.

The court appointed a lawyer to serve as Cayla and JaiKyla’s legal guardians during that spell.

“We are not perfect. We make mistakes. We went through a lot of sadness and misery. But we found the way back to each other. It took some time.”

Last summer Denise Wilson moved back home and, in January of this year, the couple celebrated their 31st wedding anniversary.

Things were finally looking up. Neither Denise, 49, or Bill, 52, accepted that Cayla’s brain injuries were as extensive as doctors had said.

They saw the Cayla behind the empty eyes. She made sounds in an attempt to communicate. Two times, they are sure she said, “Mom.”

Her parents say that Cayla had her own language. She would shut her eyes for a second to answer ‘yes’ to their questions.

“We have pictures of her when she laughed at her daughter,” says Denise. “She had the ability to delight people.”

Unfortunately, the situation took a turn for the worst in February 2018.

It started when Cayla developed an infection. It ended up with surgeons having to remove extra fluid that had built up in her skull, but they knew the situation was serious.

Weeks later, her parents had come to terms with the fact that their daughter had suffered a severe bleed on the brain. Cayla was close to death.

Five days later, on the night of March 30, she took her last breath. Bill Wilson believes his daughter had finally had enough.

“She seemed exhausted. She was tired of fighting,” he says.

Cayla Wilson passed with both parents by her side. Her mother held one hand, her father held the other.

According to Denise, two tears rolled down Cayla’s face as she took her last breath.

“Yesterday, you were finally laid to rest. Cayla, you looked so beautiful. You looked like an angel on earth getting ready to spread her wings. I loved you so much cayla, and wish I could have been around more.. I wish I would have been a little older ,so then I would have more memories of you.. but the memories I do have , I will always cherish. You left the biggest part of you behind for us to keep, and we are beyond great full for that . Jaikyla is beautiful, and smart and funny, and kind. Just like you.. I want to make sure I spend more time with her, and the family. Because family is everything, and you have showed us that over the past eight years. And honestly can’t thank you enough, because now that your time has come, our family has been brought back together again. I know this is what you wanted

? you knew, and you knew it was your time to fly high with the most beautiful angels

? I know your looking down on me and my daughter, and the whole family

? I love you cousin! Forever and always

After the funeral, Denise and Bill are planning on spending more time with their son. He’s 19-years-old now, having been 11 at the time of the accident.

Bill is planning for them to fish, camp and go on trips together – all the things they couldn’t do before because they were worried about leaving Cayla.

“But Cayla will always be with us,” says Bill.

“She is a real joy pillar. She makes life so much better for us. Our daughter left us a gift, and it’s JaiKyla,” says Denise.

The past eight years have almost crushed this family through grief, sadness, fatigue and economic struggle.

Yet, Wilson’s story is also one of resilience, love and compassion.

When their life changed in the blink of an eye, Denise and Bill showed that they would never abandon their daughter. They were there for her right up until the moment she drew her last breath.