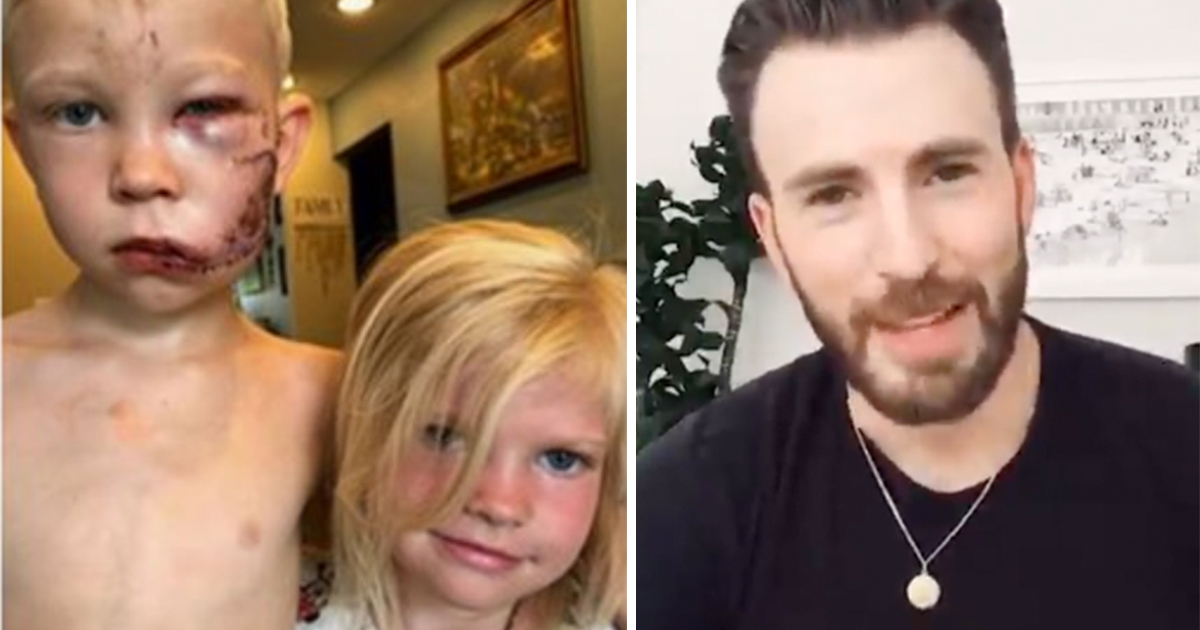 You’ll likely remember the incredible story of 6-year-old Bridger, the young boy who saved his little sister from a dog attack.

Bridger suffered wounds to his face that required around 90 stitches in the aftermath of the ordeal, but, following a post from his aunt hailing his heroics, his feats gained legendary status online.

It all started on July 9, when Bridger realized his younger sister was about to be attacked. Without thinking for his own safety, he stepped into harm’s away and protected his sister, eventually having the wherewithal to grab her arm and drag her to safety.

Thousands upon thousands of people praised him after his aunt’s post, and it would appear news of his brave deed has even reached the eyes and ears of a number of celebrities.

One such celebrity is Chris Evans, who has long played the role of Captain America in Marvel’s film series. After hearing that Bridger was a big fan, Chris made him a personalized video from Captain America, letting the boy know his courageous actions have been noted.

“Pal, you’re a hero, what you did was so brave, so selfless — your sister is so lucky to have you as a big brother. Your parents must be so proud of you,” Evans said in the video.

He added: “Keep being the man you are; we need people like you. Hang in there. I know recovery might be tough, but based on what I’ve seen, I don’t think there’s much that can slow you down.”

Not only that, but Evans promised to send Bridger a real Captain America shield for his valor … a gesture that certainly went down well with the 6-year-old.

Nikki Walker, the aunt who originally posted Bridger’s story, has since provided a positive update for fans wondering how the boy is doing.

“I just finished visiting with Bridger at his home,” she said. “His wounds are looking so much better! He’s in great spirits, and his awesome personality is intact. He can’t smile too widely yet, but he was grinning as I read some of your comments to him.”

What a brave little boy Bridger truly is, and a credit to his family. They certainly must be extremely proud of him.