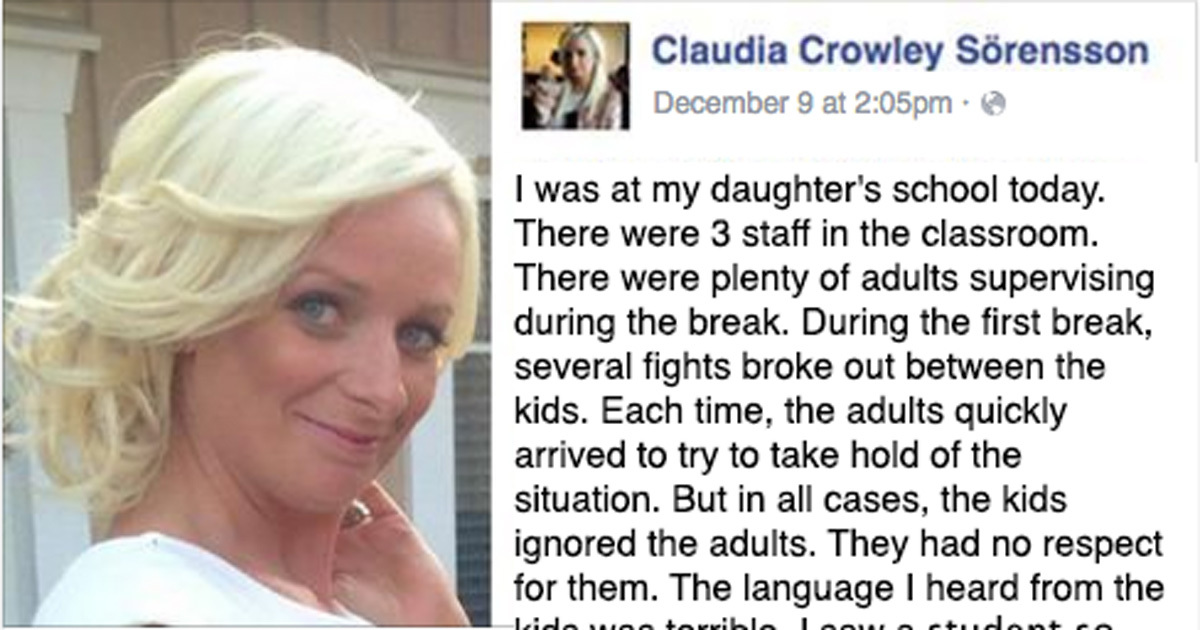 After spending just one day at her daughter’s school, mother Claudia Crowley Sörensson had enough. What she experienced in the classroom and in the schoolyard both shocked and upset her. Later that day, she described her experience in a Facebook post, urging all parents to take more responsibility for their children’s upbringing. Within days, her post was shared by thousands. Read it for yourself below.

I was at my daughter’s school today. There were 3 staff in the classroom. There were plenty of adults supervising during the break. During the first break, several fights broke out between the kids. Each time, the adults quickly arrived to try to take hold of the situation. But in all cases, the kids ignored the adults. They had no respect for them. The language I heard from the kids was terrible. I saw a student so sad and scared after being beaten to the point he shook.

In the classroom, everyone spoke at the same time. The adults firmly told the kids that they must raise their hands and wait for their turn to talk, but it just continued. The fighting continued in the classroom after lunch. I witnessed school staff get physically hit by kids. That’s our children and our teachers’ lives, every day. I was very impressed with the teachers that I saw today, they really did do their best. As parents, we can’t expect to have one adult per child at schools. Yes, there are children with special needs who need more attention, but there were many, many ordinary children who simply behaved badly.

I am so terribly disappointed in these kids. Many were so incredibly disrespectful, they were literally violent and abusive toward their classmates and school staff. This I don’t think we could blame the school for. There were 3 teachers in the classroom, we can hardly blame lack of staff, the problem was that there was no respect whatsoever, the language was very abusive and filthy from the kid’s side.

That responsibility belongs to the parents – it is our responsibility to raise our children, it is our job to teach them respect and NOT the school’s. What I saw today were teachers who are passionate about their students, but I wonder how much crap they can take before that flame goes out. The school has things they can improve but it is time for us parents to take responsibility too.

Claudia posted her rant on Facebook, and within days it was shared over 8,500 times.

On her blog, she writes among other things that “This has become much larger and spread much further than what I was prepared for. I want to thank you all for choosing to share my words and I see it isn’t just me that perceives this as a problem in all communities where parents and kids exist.”

If you agree with Claudia, feel free to share this further so that more people can read her words.