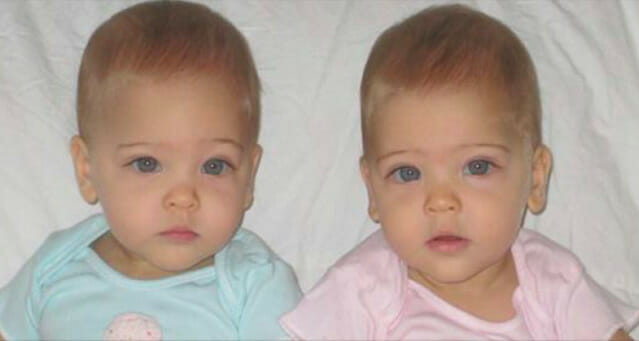 We usually say that all babies are cute, and naturally, we think of our own children or grandchildren as the cutest of all.

But when Jaqi Clements gave birth to her twin daughters 11 years ago, everyone could see that there was something special about these twins.

Even as infants, they were predicted to become “the world’s most beautiful twins”, among other things, according to Daily Star.

Today, the girls have turned 11 and are now working as influencers, actresses, and models – take look at what they look like now, in 2022!

In June 2010, Jaqi Clements delivered two, healthy twin daughters. She named them Ava Marie and Leah Rose and the mom loved them from the moment she laid eyes on them.

However, little did she know they would soon become known as “the most beautiful girls in the world” just a few years later — or that they’d be launching a modeling career so soon!

There was just something about these identical twin girls’ that makes people’s hearts melt the second they see them.

Either way, what’s certain is that Ava Marie and Leah Rose have grown up to be two very fairytale-like girls.

The twins have gained over 1.8 million followers on Instagram in just a few years. Fortunately, they are using their power on social media to help people in need and raise awareness on important topics such as organ donation.

See for yourself below:

The girls were so requested that they had their own model agency to make sure everything is right when booked for photography and so on.

Leah Rose and Ava Marie now have 1,8 million followers on social media, after their mom opened an Instagram account for them in 2017.

They have been featured in Harpers Bazaar Brazil and have worked for brands such as Nike, Disney, Mattel and Target. ​

Despite being busy with modeling, acting, and school, mom Jaqi Clements insists her daughters are “lovin’ every minute,” according to a blog post.

“They loved to perform their dance routines in front of an audience, any audience. They loved to be the centre of attention,” Jaqi said.

Most recently, the girls have been working and involved in designing their own clothing and accessory collections. They teamed up with Levi’s to front their anticipated Levi’s xx Clements Twins Collection.

Wow, these two sweethearts are simply breathtaking! It’s fascinating to see not one, but two so equally stunning little girls.

Today, many people believe that girls only focus on modeling and designing clothes. But that’s completely wrong – the Clemens twins also have other hobbies and love sports.

According to themselves, they are not modeling all day and night. They also swim and are both LOVING volleyball right now.

So maybe, it’s a couple of coming sports stars we see in these pictures?

Share their beautiful pictures with your family and friends if you fell in love, too!