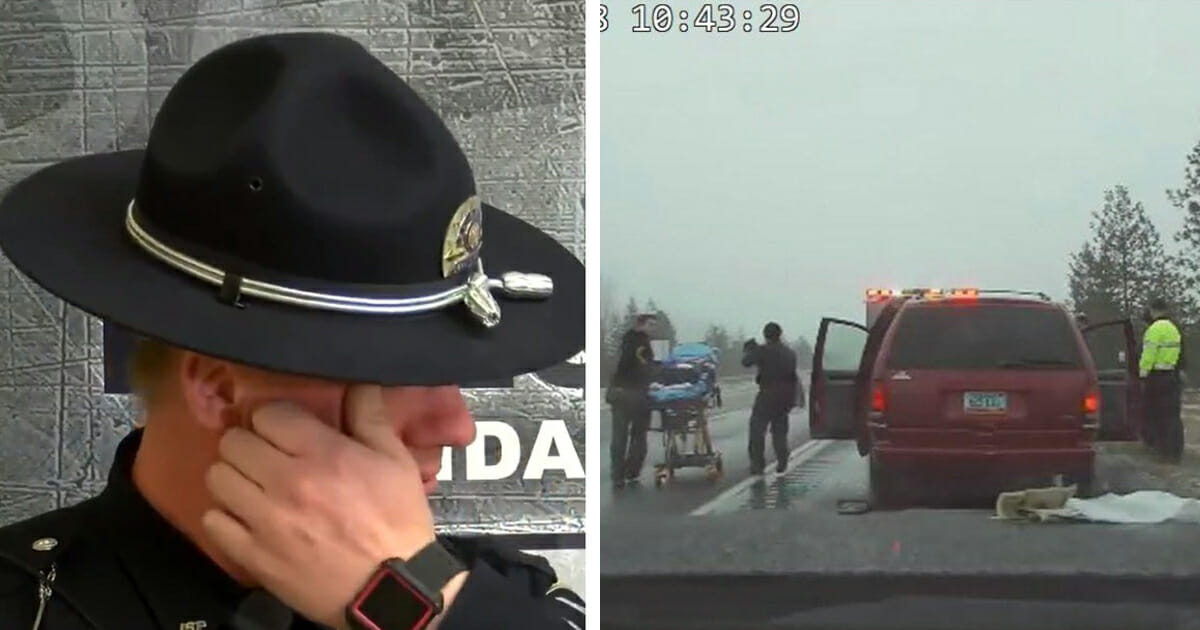 In a world where we idolize superheroes and champion celebrities, it’s important to remember the real angels in society.

We’re talking about those people who dedicate their days to ensuring the rest of us can live safe and happy lives. This particular story concerns Officer Shane Grady, who along with a few fellow colleagues saved a life during what was originally a routine traffic stop on Interstate 90 in Idaho.

It was Sergeant Justin Klitch who made the call regarding the decision to pull over a certain van. It turned out that the officers were destined to discover a whole lot more than they bargained for …

After approaching the vehicle in question, the officers asked for the driver’s license and registration. It was then, though, that the chimes of alarm began to ring.

There was a woman sat in the front seat covered in bruises – it was clear she was suffering from some sort of physical abuse.

Though terrible, that wasn’t even the most alarming thing. On the back seat of the car was a toddler who also showed signs of abuse. Furthermore, his condition was worrying.

It took little time for the officers to garner the serious nature of the situation and step in.

In a later interview, Officer Grady couldn’t fight back his tears. He explained that though he had witnessed forms of negligence and abuse over the course of his career, the fact that this one involved a boy of two was enough to break his heart.

“While we there, he [the sergeant] discovered a young boy in the back of the minivan,” Officer Grady said in the interview. “It’s taken me all week to type this stupid thing out.

“He had discovered a small boy in the back who was severely injured. He had bruises on his head, multiple lacerations on his stomach, his arms were stuck in a fetal position and his left eye was not functioning properly.”

Upon discovering the boy, the officers rushed him to the hospital and took the adults in the car to the station for questioning.

There was another boy in the van, too, though this one (a one-year-old) was in good health.

It was on the way to the Sacred Heart Paediatric Hospital in Spokane that the baby, referred to as ‘Baby J’, began to experience real problems. His heart rate shot up from 70 to 110 in a matter of minutes and he was in constant pain.

Baby J was quickly moved to the ER and had to to spend a significant amount of time in intensive care, but he eventually recovered after receiving medical treatment for his wounds and brain trauma.

“This is the worst case of this type of situation that I’ve run into. I’ve been to many fatal crashes, I used to work for a different department. Went to a lot of domestic violence situations. I’ve seen people injured, I’ve seen people hurt, but I’ve never seen this before. So I don’t know what the toll is going to be,” Officer Grady said.

UPDATE- Baby J is out of ICU!!! Sgt. Klitch just left Sacred Heart Hospital and said Baby J is alert, engaging and playful. We are all so thankful for the hard work and care of the Sacred Heart Pediatric ICU team! Still work to do but good news none the less.

Doctors are certain that were it not for this routine stop, Baby J could have died from his injuries. Officer Grady and the others in the Idaho force saved his life.

This is heartbreaking, but worth a minute of your time as Trooper Shane Grady describes responding to the worst case of child abuse he's ever seen.
Thankfully, because @ispdistrict1 stepped in, that child is expected to make a full recovery.
Story tonight on @KHQLocalNews pic.twitter.com/z4zlgVH6YD

Share this article to pay tribute to Officer Grady and the other heroes who rescued a life that day.