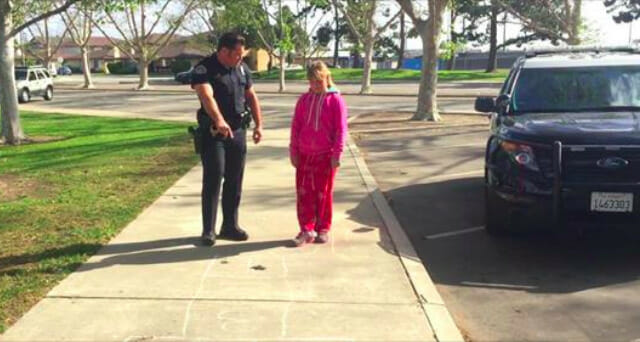 Police officers are there to serve and protect — but who says they have to do so in a traditional and serious way?

Could playing hopscotch, for instance, be included in the job description? Why not, one cop out of Huntington Beach, California thought.

It all begins when a Huntington Beach, California resident phoned the police to advise them of a suspicious looking vehicle in their neighborgood.

“This morning an officer checked on a suspicious occupied vehicle in the area of Graham and Edinger,” the police department wrote on their Facebook page.

“During his investigation he learned the people in the vehicle were a mother and her 11 year old daughter and they had been living out of their car. The officer contacted our Homeless Task Force to help arrange housing.”

It’s unclear how the mother and daughter ended up living out of a car. What’s certain however is that no one should live that way – and certainly not an 11-year-old girl.

When Officer Pricer and his partner showed up on scene, his partner pulled the mom aside to begin making housing arrangements and promptly help her and her daughter out.

But the 11-year-old, understandably, was clearly overwhelmed with the sudden police presence. And so Officer Pricer, standing tall at a minimum 6 feet tall and 200 pounds, came up with a plan.

He pulled the girl aside after noticing a hopscotch pattern on the ground — and challenged her to a good old game.

“As the officer worked on housing arrangements with the mother, another officer on scene, Officer Pricer, began displaying his expertise in hopscotch to the daughter,” the department wrote.

The officer’s playfulness and compassion immediately put the young girl at ease — and the two proceeded to engage in a friendly hopscotch battle.

Watch it unfold in the video below.

Isn’t this Officer Pricer just wonderful? Such simple gestures can really brighten up a person’s day. Share if you think others need to see this.