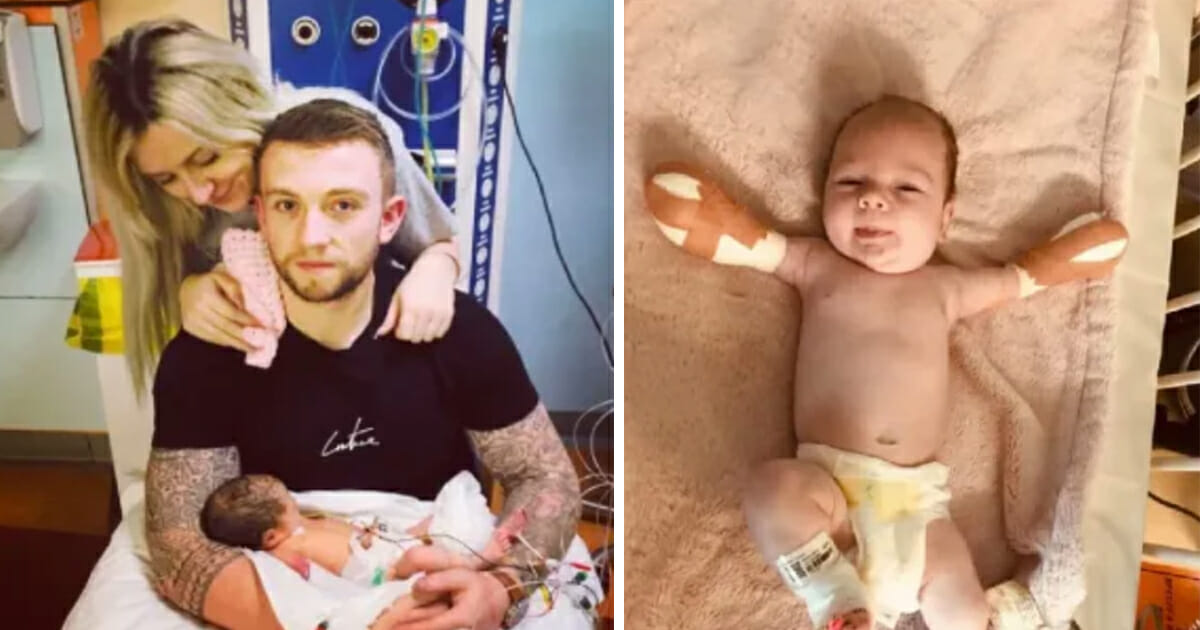 Amy Cawley’s pregnancy was far from a simple one. The 27-year-old had been closely monitored as a result of reduced movement on the part of her baby.

As per Metro, at 34-weeks, Amy grew concerned that she hadn’t felt her little one move for three days. Scans were showing that the baby girl was small for her age, but that hadn’t prompted too much worry, at least not enough to expect what was to come.

That changed when she went to a hospital in Dorset, England, and scans showed her baby’s heart rate was low. Amy would have to deliver her girl by emergency c-section.

On December 9 last year, Darcie-May Ferries came into the world weighing 4lb 7oz. No sooner had she arrived, however, did doctors notice that both her arms were covered in black spots.

She was moved to a neo-natal ICU and then to a hospital equipped to deal with burns and skin grafts. An MRI scan showed she had suffered a stroke in the womb.

Her parents weren’t even able to hold her, and it’s been a rough road since then. Darcie has undergone no less than six operations to slowly remove her hands and arms after they turned black and rotted due to clots in her shoulder that cut off blood supply.

On one occasion, the little girl’s parents even had to witness some of her fingers falling off while she was in the bath.

Even so, Darcie’s parents have refused to give up hope. She spent her first six weeks of life in hospital, but mom Amy and dad Alex are looking to the future. They’ve since set up a fundraiser to help cover the cost of her ongoing treatment.

Alex said: “Darcie has gone through so much in her little life, and we realise every day how lucky we are that she’s here.

“I know she will not know any different as she will grow up without her arms and hands, but she will realise she is different to other children and it will be up to us as her parents to help her feel comfortable and be proud of who she is.”

Mom Amy, meanwhile, says they’re so thankful she is alive:

“Doctors told me afterwards if they had waited another 48 hours, Darcie wouldn’t have made it. It was so scary to think how close we’d come to losing her.

“We don’t know why it happened or whether it could happen again if Darcie has a baby sister or brother. I had my placenta tested to see if it could be a genetic problem, but the tests did not come back with anything.”

Darcie had been placed on medication after birth to try and thin her blood and break up the clots in her shoulder. Initially it seemed to be working, but it was too late to save the fingers on her left hand.

“Her thumb and index finger on her left hand were okay, but she had three black fingers, and it became clear they were not going to last.

“We had to let them fall off. In fact, we were bathing her one day and a couple of her fingers just fell off. We had been expecting it to happen, but it was horrible, and we didn’t really know how to deal with it. Her fingers looked like little sultanas.”

There were other problems too, leading to Darcie undergoing six operations in four months. She’s now left with just the thumb and index finger on her left hand, while her right arm has been amputated at the forearm.

Moving forward, the little girl will require more surgery on her right arm. Her family hope to raise money through a GoFundMe page that will help to pay for her treatment and care.

We’re sending all our prayers in little Darcie’s direction. We pray she will recover well and enjoy a healthy, happy life.

Share this article to wish this family well in the future!