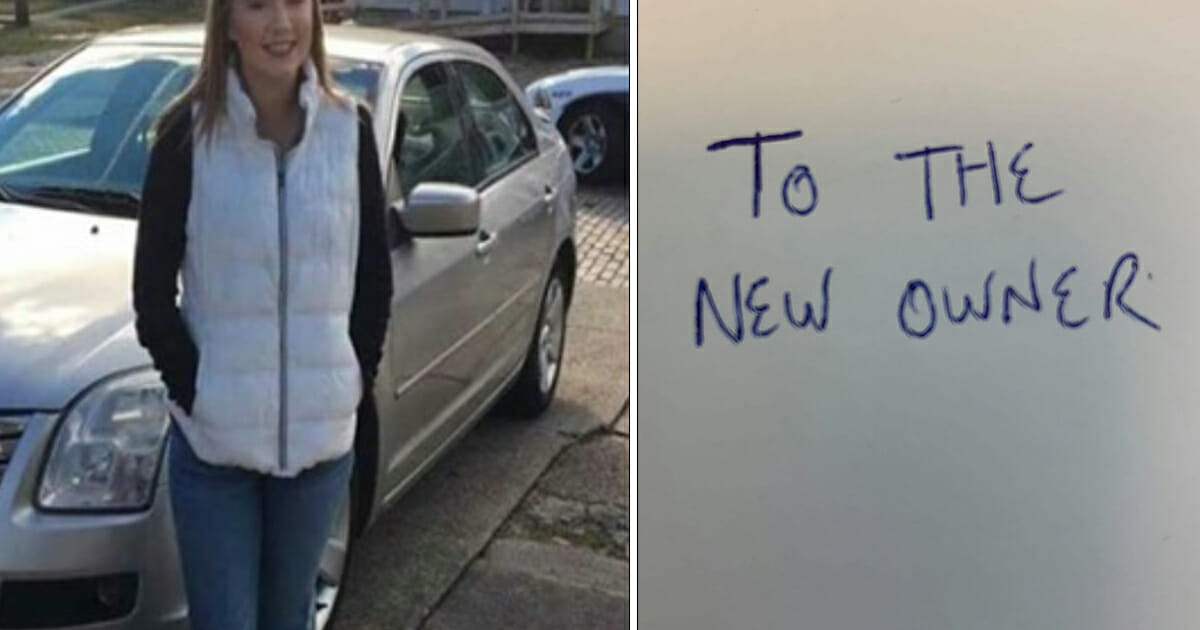 Buying used cars is nothing out of the ordinary. It’s often a cheaper, more efficient way of purchasing a vehicle, and one many people turn to.

Of course, like a house, a car can represent a whole load of memories for the person selling it, meaning it can sometimes be difficult for them to actually ‘let go’.

Kevin Duke had decided to surprise his daughter on her 16th birthday by buying her a car. He did his due diligence and found a vehicle that fitted his requirements.

Reaching the age when you’re allowed to drive is a milestone most teenagers dream about.

So Jada Duke was overjoyed when she turned 16. Because her dad, Kevin, decided to give her the perfect gift: her very own car.

He picked out one he thought would be a good match for his daughter. And because Jada’s birthday was still a few weeks away, Kevin decided to look the car over for flaws and fix them so the car would be as safe as possible for her.

But while doing so, he made a special discovery.

After going through the car when the purchase was finalized, however, he found a letter in the glove compartment. It was written to Kevin himself and ended up moving him to tears.

Kevin knew he wanted to surprise his daughter on her 16th birthday. He scrolled through a host of car ads, eventually coming to a silver-colored Ford that seemed safe and was in good condition.

He bought the car from a woman named Sabrina Archey and drove home thinking nothing more of it. When he went through the car before giving it to his daughter, though, it became apparent the former owner hadn’t cleared everything out of it. Or at least that’s what Kevin thought when he found a letter.

It turned out the letter was written to him.

The words on the paper had been written by Sabrina.

Reading the letter, Kevin found out that Sabrina had lost her mother, her aunt, and her six-year-old daughter in a house fire. It was the steep cost of the funerals that had forced her to sell the car.

Sabrina revealed that the car had given her peace in tough moments and would always have a special place in her heart. It was her wish that the new owner promised to take good care of her vehicle.

The letter read: “To the person that gets this car, I just wanted to let you know what a special vehicle you’ve bought. This car belonged to my mum. She passed away Feb 25, 2015 in a house fire along with my 6 year old daughter and my aunt. The last time my mum drove this car was the day she left us. Her and my daughter went out shopping and got their haircut.

“This car holds a lot of special memories for me. My home and everything in it is gone, this car is all that I had left to touch. There was a mix up with paperwork and that’s caused the car to not be paid off by insurance. It’s very upsetting that I have lost my family, my home and now I’m losing this last link I have with my mum and child through no fault of my own.”

Sabina went on to ask that if Kevin ever decided to sell the car himself, she would like to hear from him first. She didn’t have the funds to buy it back, but dreamed of a day when she was more financially secure.

Kevin was naturally overcome by her letter. He wanted to help Sabrina get her car back. Together with a person named Tammi Warrington, he started a fundraising campaign so that the car, “Sylvia”, could be reunited with her true owner.

They calculated they would need around $12,300 to cover all the costs involved in getting Sylvia back to Sabrina, as well as ensuring she wouldn’t be laden with bills and other expenses.

A TV channel got in touch with Kevin and eventually, Sabrina was reunited with her beloved car … it all turned out well in the end!

Thanks to Kevin’s beautiful gesture, Sabrina got her car back. On the face of it, it’s little more than a machine comprised of four wheels and a steering wheel, but to Sabrina, it’s so much more than that: it’s family.

Kevin’s actions certainly moved me to tears! Way to go.

Share this article with your friends and family on Facebook to pay tribute to his beautiful gesture.