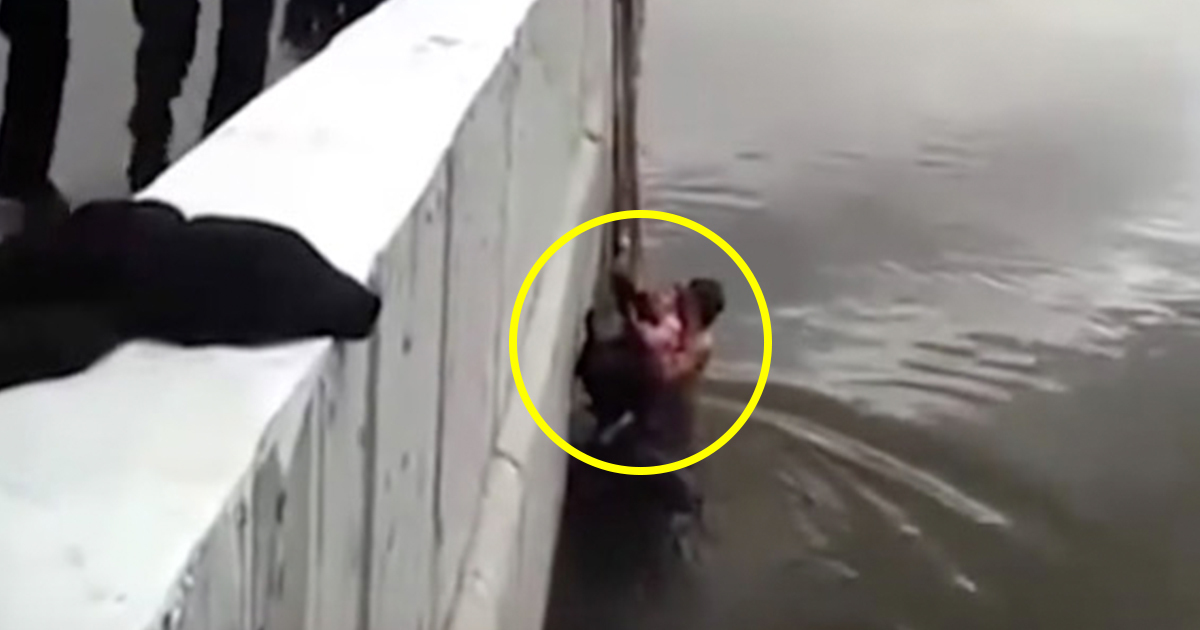 I think we can all agree that children should never be left alone near water. But despite this, accidents sometimes happen.

On May 31, the Karpjuk family were on a trip to the Irtysch River in Russia. The family’s two daughters, five and seven years old, got tired and asked to sit in the car while their dad went to a nearby store and their mom took care of their younger sibling.

The car was parked right in the vicinity so the girls’ dad, Vyacheslav, wasn’t worried about his daughters. But seconds later, the unthinkable happened. The two girls had probably seen something in the river and went to the edge of the water for a better look.

The girls leaned on a railing, and must have leaned too far. They lost their balance and fell into the ice cold water, writes trendjournaal.nl. And neither of them could swim.

The girls’ father didn’t hesitate for a second and immediately jumped in to rescue his daughters. But the girls grabbed hold of him so tightly that he couldn’t hold them both while trying to keep himself afloat. There was nothing to grab onto.

Meanwhile, people started gathering by the side of the river. Some threw ropes, while others filmed the event.

The girls’ father tried as hard as he could to tie the rope around his daughters, but he didn’t have the strength to hold both of them while he grabbed the rope.

Then, out of nowhere, a teenager appeared. He tore off his clothes and jumped in the icy water without blinking. The girls’ father was shocked when he saw the boy swim up to him.

In just a few minutes, the teen managed to get the girls up on shore.

The girls’ parents were forever grateful for the teen’s life-saving efforts.

News of the story spread like wildfire, and soon it reached the local newspaper, who interviewed the unknown hero. It turned out that the teen, Sasha Yergin, didn’t have an easy upbringing. He had an absent dad and an alcoholic mother and was raised by his grandmother. But the teen had made his mark.

Sasha is described as very smart, but is also known by police as a bit of a hooligan. Stil, since Sasha’s story went viral, several families have offered to help him and his grandmother increase their chances for a brighter future.

Sasha’s heroism not only saved the lives of two little girls, but also probably saved him, too.

It’s nice to see good deeds ripple out like waves on the water. If Sasha didn’t jump in the frigid water on that day, his life might not look as bright today.

Please share this story to pay tribute to Sasha and wish him all the best of luck in the future.