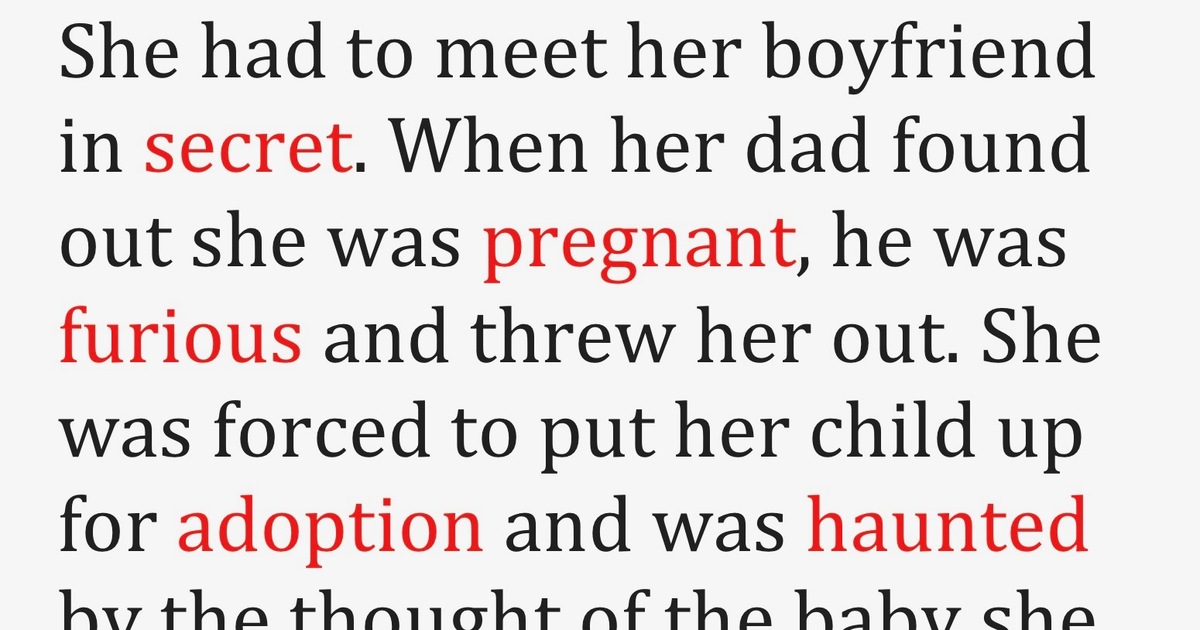 As long as hope is alive, nothing is impossible. And when things are supposed to happen, fate eventually works it all out.

This story is an excellent example of that. It begins with a heartbreaking situation: a young woman is forced to give up her baby for adoption after her dad refuses to accept the child’s father. Fast forward 30 years and the woman receives an unexpected phone call, which in turn leads to an unlikely encounter.

I don’t know if the events in this story really happened. But either way, the message is still strong: some people are just as meant to be together.

This story is a little long, but I promise, it’s worth it. I was profoundly moved and I couldn’t hold back the tears at the end.

“‘Is this Jenna?’ the voice on the phone asked.

Jenna clutched the receiver with a trembling hand. That voice was exactly as she had dreamed it would sound. Just exactly like his father’s.

Jenna had known for thirty years that this day would come. Adopted children seem to want know all about their natural families. Feelings of dread, but a sort of elation, filled Jenna while she carried on a conversation with the young man on the phone.

In 1967, Jenna was in love with David. But David’s family was from the poorer section of town. Jenna’s father was controlling and abusive, and he would not allow her to date David. With the help of friends, they sneaked around see each other.

When Jenna discovered that she was pregnant, her father became enraged. He forced the teen to go away to live with an aunt until the baby was born.

Heartbroken, David joined the army and went to fight in Vietnam. He wrote some letters to Jenna, but her father threw them away. David even tried writing letters to one of Jenna’s friends, hoping to get some word to the girl he dearly loved. Jenna never received any of the letters, and she didn’t know how to contact David.

Jenna came home after the baby was born. She dreamed constantly of the tiny infant she had held for only a second. She wondered what his adoptive parents were like. Where they lived, and what the baby was growing to look like. She also dreamed of the day she would be old enough to leave home and get away from her controlling father. After graduation, Jenna went to college, then got a good job in large city. She never returned to her hometown, still angry that her father had not allowed her to keep her child and marry David.

Memories of a lost love and a son she had to give away caused Jenna to never marry. She kept busy with her job as a school teacher. Organizations for battered women and unwed mothers became her passion. Jenna worked very hard to help others all her adult life.

But in the back of her mind, she always knew that this day would come. Her son would find her and want to know why she hadn’t loved him enough to keep him.

‘Can we meet sometime soon?’ the young man asked. His name was Bradley. Jenna agreed to allow him to fly to her city and meet her. He was thirty-years-old and married. He had two children.

After she hung up, Jenna wished she had asked if Bradley had been able to find David. She let the thought die and began to prepare for the visit from her son in two weeks.

The days dragged. Jenna’s emotions flew. She went from excitement at seeing her son at last, to dread that he wouldn’t like her or wouldn’t understand.

Finally, the the day arrived. Jenna drove to the airport two hours early because she was too nervous to stay home alone. She paced and bit her nails.

Bradley’s flight was announced. Jenna got as close to the gate as she was allowed, craning her neck to watch for the family she was about to claim. A lifetime of nightmares and regrets filled her mind.

Suddenly, there he was, right in front of her. A hug so tight that he picked her up was the first touch from her son in thirty years. They hugged and cried for several minutes. Then a little boy tugged at Bradley’s shirt.

‘Daddy, I’m thirsty.’ Jenna hugged her grandson, then his older sister. She hugged her daughter-in-law, and then hugged Bradley some more. The little boy began to shout and run toward another man. ‘Grandpa!’ he yelled.

Jenna stopped and started. It can’t be. But how? Is it really him?

Bradley dropped a soft kiss on Jenna’s cheek. ‘Yes, it’s really him. I found him last week, and he has been to the house to visit us. He was very excited to know that I was meeting you today. He never got married either, you know.’

David picked up the little boy. Then his eyes met Jenna’s. He gently put the boy down. In instant, he reached Jenna. She was in his arms a long time before they pulled apart look at each other.

The weekend ended much too soon. Bradley and his wife made Jenna promise to come visit in a few weeks. When they went to the airport, David helped Bradley’s family get situated.

‘Where are you flying out from?’ Jenna asked.

‘I’m not,’ he answered. ‘I’ve extended my vacation. We have a lot of years to make up for.’

Bradley was able to witness his parent’s marriage at Christmas time that year.

Yes, there really are some happily-ever-afters.”

Don’t forget to share if you also believe that love overcomes all obstacles!