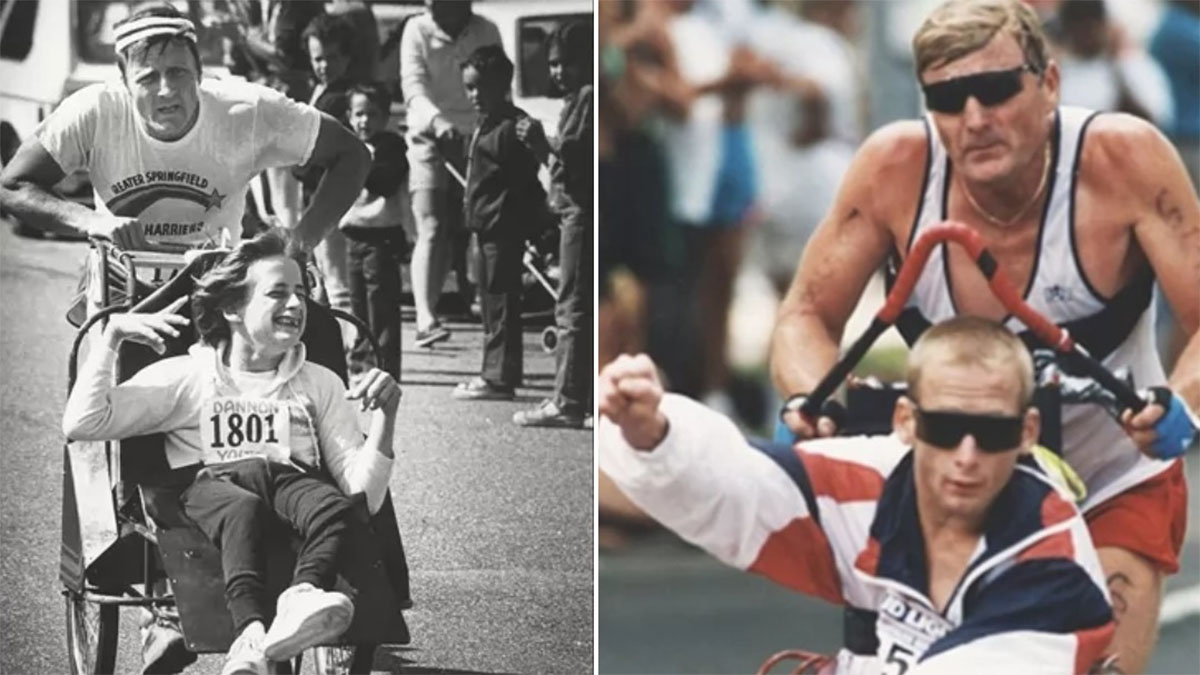 They were a father and son team who proved that whatever obstacles you are faced with, hard work and determination will get you through – and the two have become an inspiration to people around the world.

For 40 years Dicky Hoyt and his son Rick, from Holland, Massachusetts, have run more than 1,000 races, duathlons, and triathlons. But in this duo’s case they are a team effort, one not being able to complete the race without the other.

Rick was born with cerebral palsy and is confined to a wheelchair. When Rick was born in 1962, doctors told his parents that their son would be better off in some sort of special care facility away from his family.

“We cried, but we talked and we said, ‘No, we’re not going to put Rick away. We’re gonna bring Rick home and bring him up like any other child,’” Dick Hoyt told ABC News in a past interview.

Thankfully they found a doctor who supported their decision and told them to raise Rick as if he didn’t have a disability.

“I’m just a dad, and it meant everything to me to be able to take my son home,” Dick added. “And as he grew up, we knew he was smart, and funny, and curious. It was our job as parents to make sure he received all of the opportunities everyone else has.”

Rick was brought up surrounded by the family who loved him and even managed to get a computer so that Rick could communicate. Developed by engineering students at Tufts University the device was called the Hope Machine by the Hoyt family.

This was a game changer for Rick as he was able to attend public school. At 15 years old he decided he wanted to take part in a 5-mile race and asked his father if he could help him.

Rick wanted to raise money for a lacrosse player at his school who had become paralyzed to help show that life can still go on no matter what your disability.

His father Dick Hoyt, a retired Lieutenant Colonel in the Air National Guard, trained with his son and they both completed the race. After, Rick said, “Dad, when I’m running, it feels like I’m not handicapped.”

Dick understood what this meant to his son and from that day forward he started training so he and his son could take part in other races together.

The devoted dad started running every day with a bag of cement in his wheelchair while Rick was at school studying. The dynamic duo went on to take part in over 1,100 endurance events, including 72 marathons and six Ironman Triathlons. They even ran the Boston Marathon 32 times.

During triathlons for the swimming part Dick swam while pulling his son on a raft and for the cycling part he rode on a specially-designed tandem bike.

Dick was able to improve his fitness so much that even with pushing his son, he was able to obtain a personal record of a 5K run in 17 minutes.

People tend to focus on what disabled people can’t do, but with support and help from his family these two made sure they let the world know that anything was possible.

On April 8, 2013, a bronze statue in honor of the Hoyts was unveiled near the start of the Boston Marathon in Hopkinton, Massachusetts in their honor.

The two founded the Hoyt Foundation in 1989 to help young people with disabilities achieve as much normality as possible through daily life, including sports.

In March of last year Dick Hoyt died in his sleep at his home on March 17, 2021, after experiencing some health problems. He was 80 years old.

“He had an ongoing heart condition that he had been struggling with for years and it just got the better of him,” Russ Hoyt, one of the runner sons said.

Another brother, Rob Hoyt, broke the tragic news to Rick. When hearing the heartbreaking news of his father’s death, Rick was very sad.

“You could see it in him, it was like someone hit him,” he said.

Dick was a quiet man who always wanted his son to take the limelight for their achievements.

“I knew the credit went to my son. He was my motivation. Something gets into me when I’m competing along with Rick that makes us go faster. My strength comes from him, as if it moves from his body into mine. The strength that I got from my son that day enabled us to become Ironmen,” Dick said.

But his son knew that his dad had the strength to achieve what they did.

“I also describe my dad as one of the most determined individuals I’ve ever met; not simply determined to help me in my life, but also to help others.” Rick said.

What these two achieved and their dedication to each other are inspirational. Dick never let his son feel like he couldn’t do something and with that belief, in him, Rick was able to do so much.