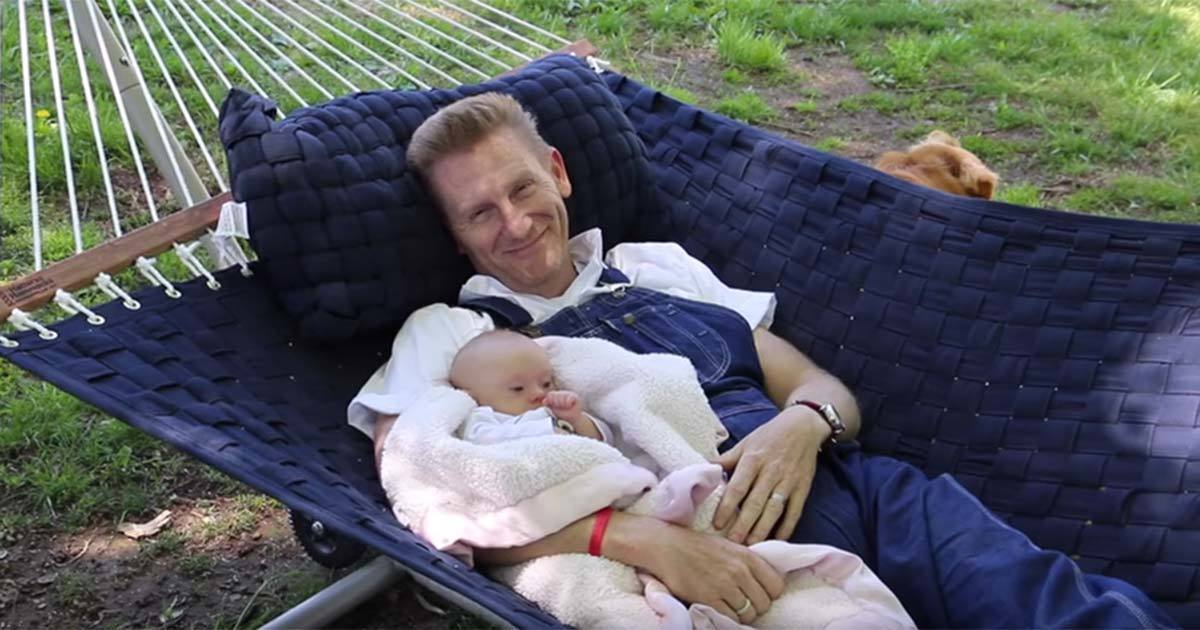 Rory Feek and his wife, Joey, lived a happy life as two well-known country singers. But one day, everything was turned upside down, when they were told that Joey had terminal cancer.

Eventually, Joey passed away and Rory was left to raise the couple’s newborn baby, Indiana.

As a single dad, Rory has had to not only deal with the grief of losing his wife, but also contend with those who judge him. Because his daughter, Indiana, has Down syndrome, Rory gets told that his daughter is a “mistake.” And he has to defend his beloved daughter from the world every single day.

Rory knows those who criticize him are wrong—he knows that “Indy” is a gift. And he wrote a powerful post on his blog, thislifeilive, in response to his critics.

“When we first learned that Indy had down-syndrome, Joey and I weren’t really sure what to think, or what it meant to our lives and hers. Over the years at the concerts we’d played and in our travels, we had met a number of young-adults and older people that had downs… including our manager’s grown son Greg, but we never knew any, not really. Especially babies.

All we really knew was that Indy had an extra chromosome and that was going to make her different. She would look different and develop slower, but outside of that, we weren’t really sure of anything else. Until we called the people around us. Everyone was anxious to hear how the birth had gone and how Joey and the baby were doing, and so in those first few days, I dialed and spoke to many close friends and family members and told them that it all went well, and then I told them how the doctors suspected that she has down-syndrome. And almost everyone said the same thing. ‘I’m so sorry.'”

“That’s such a strange response to the birth of a child. Maybe they were just sensing the confusion in my voice or more likely, they didn’t know what to say. I didn’t and don’t think anything negative about their responses. I probably would’ve said the same thing in their shoes.

It’s what society has told told them – told all of us… …awe, you didn’t get a regular baby… you got something less… a burden that will last a lifetime. And I get it it. That’s the messaging that is out there most I think. But it’s wrong. At least I think it is. And I know Joey did too.”

“God doesn’t make mistakes. Indiana is not less than any other child. Different is not less. Having down-syndrome doesn’t make her life any less meaningful than someone else’s or her dreams or feelings any less important. Not as a child and I suspect, not in the years to come when she grows to be an adult.

Joey and I have since met many many kids and babies with down-syndrome and other special needs. I’ve had the blessing of seeing lots of them at Indiana’s school High Hopes in the past few months alone, and they aren’t less. None of them are. Like typical kids, they come in all shapes and sizes. Some learn faster, some slower. Some are silent and some vocal. Some crawl and walk earlier than others and some, like Indy…take their time. But they are all beautiful. All gifts from heaven above.”

“Over the past couple of years Joey and I have heard the statistics, and they broke our hearts. They still break mine. That somewhere between 70 – 90% of pregnant mother’s that get tested and learn that their unborn child has down-syndrome abort the baby. I get it though. The world has told us that they are less. A mistake. But I don’t believe they are. At least I know Indiana’s not.

When she was born, Joey and I said, ‘this is the child God wants us to have,’ and we believed it. And we were right. I can not imagine Joey not having those two years to be a mama to Indiana and get to experience the love and happiness that Indy brought to her. God knew that. He made it so. It was His gift to her. Like Indy is my gift now. She is the smile on the face of father who should be crying. She is the joy in the life of a family that should be filled with sadness.”

“We finally finished editing the movie and turned it in a few days ago. I’m so so proud of it. Proud of my wife. Proud of the chance to share this story with others. I think the film says so much, by never saying anything at all. You just watch a woman live and love and are changed. At least I am.

And you also see a baby born near the beginning that is not the child we expected. But by the end, you – like us – realize that she’s not less. She’s more. More wonderful and more precious and even more important to our lives and story than we expected.”

“Our little mistake is awake and downstairs with me now, ready to have her breakfast. She’s excited because today is ‘water day’ at High Hopes and she gets to wear her swimsuit to school and go swimming with all her little friends at school.

I’m excited too. Excited to be her papa. And to see who she becomes…and who I become because she’s in my life. I still have so much to learn and I have no doubt that while I’m teaching her… she will be teaching me.

Watch this video Rory made for his beloved daughter:

We are all different, and those differences are what make us unique. This father’s powerful letter is both beautiful and important—and I hope that more people get the chance to read it. Please share it if you also think that more people should read Rory’s message!