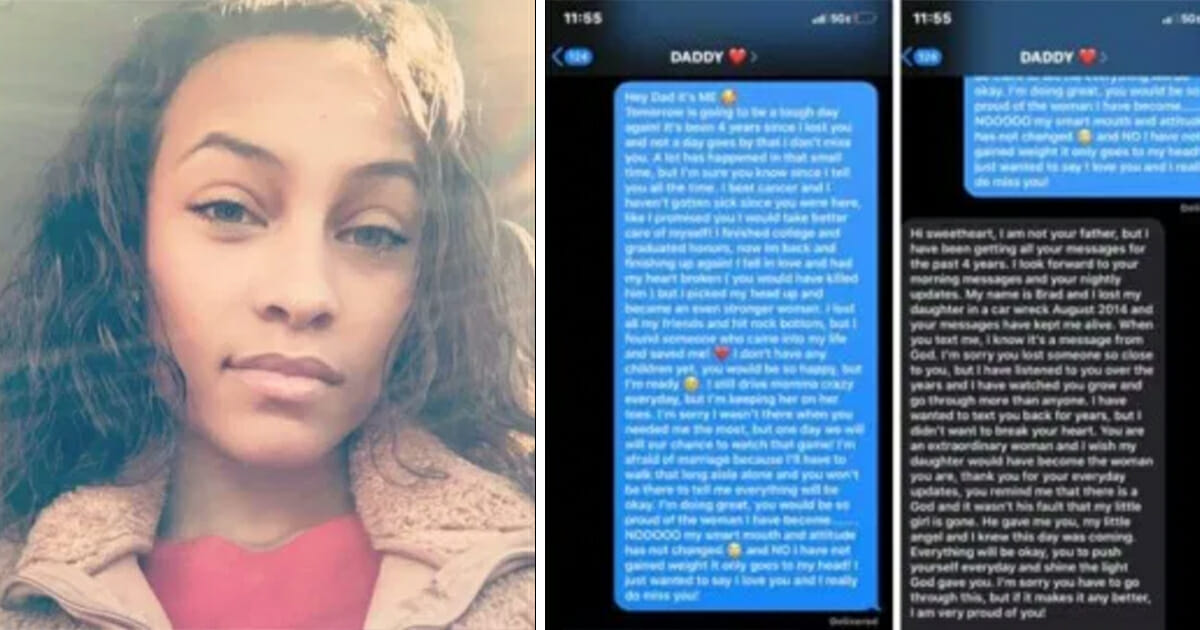 The death of a loved one can leave a hole in someone’s heart too vast to ever be filled.

This is especially true when that loved one played a significant role in your life. Naturally, it’s common for grief to be life-changing when it’s a person’s mother or father who has passed away, for example.

With that in mind, it’s no wonder that people turn to different coping mechanisms and methods of trying to tackle their bereavement.

For 23-year-old Chastity Patterson, that method was through sending texts to her deceased father Jason Ligons concerning updates on her life as a way to keep his memory alive.

She did so for four years, never failing to keep him in the loop with the ongoings of her life. Then, one day, everything changed when she got a response.

According to Metro, last Thursday she sent her dad a message on the night before the fourth anniversary of his death. It read: “Hey Dad, it’s ME. Tomorrow is going to be a tough day again!”

Said text then proceeded to delve into her grief and going over some of her proudest triumphs, including graduating from college and beating cancer.

It’s no surprise that when a man named Brad responded, Chastity was “shocked”.

It transpired Brad had lost his own daughter in a car crash in 2014. He said he had been reading the messages Chastity sent, and that they kept him alive.

“Hi sweetheart, I am not your father, but I have been getting all your messages for the past four years.

“I look forward to your morning messages and your nightly updates.

“My name is Brad and I lost my daughter in a car wreck August 2014 and your messages kept me alive.

“When you text me, I know it’s a message from God.

“I’m sorry you lost someone so close to you, but I have listened to you over the years and I have watched you grow and go through more than anyone.

“I have wanted to text you back for years, but I didn’t want to break your heart.”

Brad then continued: “You are an extraordinary woman and I wish my daughter would have become the woman you are, thank you for your everyday updates, you remind me that there is a God and it wasn’t his fault that my little girl is gone.”

Chastity said she was “shocked and touched” by the answer. She uploaded the screenshots to Facebook, dubbing the response from Brad a sign that her father is at peace.

What a truly amazing turn of events. God’s love is all around us, we just have to take the time to see the signs and understand it.

Chastity and Brad certainly seem at peace to have been involved in such a wonderful happening.