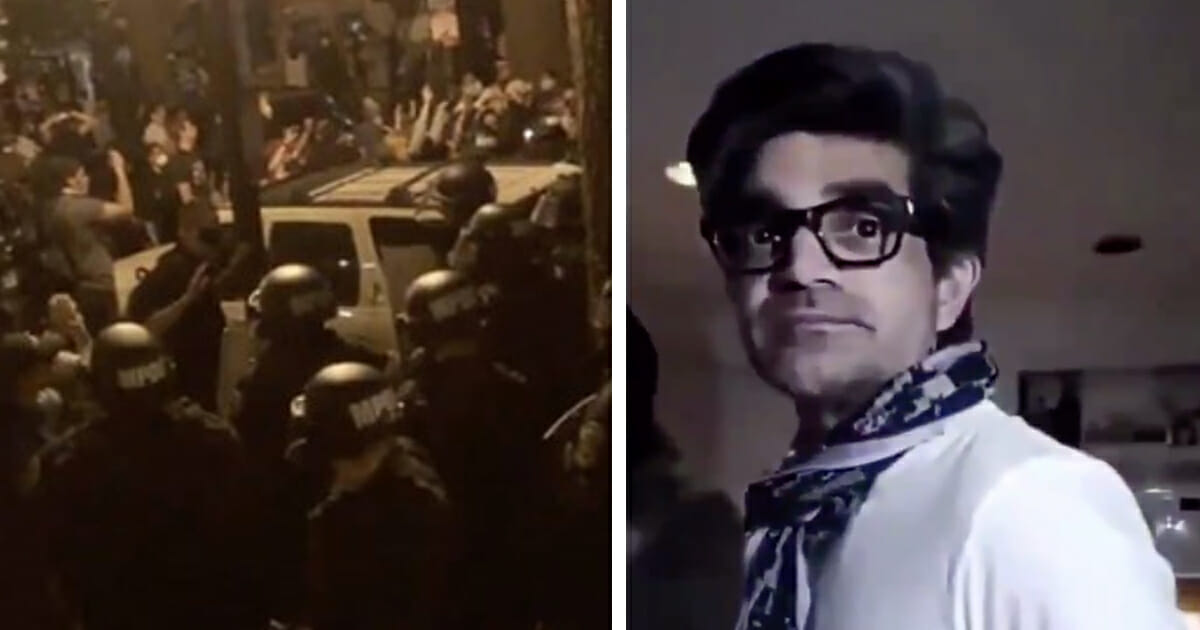 Protestors taking a peaceful stand in Washington, DC, on Monday night were sheltered by a resident who opened his doors to them after they were “trapped” by police officers.

Meka, 22, reportedly went to the protests to ensure his voice was heard, but said police “just started charging” the gathered demonstrators, as well as “pushing and hitting” them and using pepper-spray.

Meka then turned around to see a man opening his door to let the protestors in and give them shelter. All told, more than 62 protesters found themselves in the home of local resident Rahul Dubey, where they stayed for over eight hours to avoid being arrested.

Metropolitan Police Department Chief Peter Newsham said on Tuesday that his officers had “stopped” a large group of people on Swann Street to arrest them for violating the curfew.

They arrested 194 protesters in the 1400 block of Swann Street on Monday night and early Tuesday.

As for why the police began to arrest people, Newsham said: “Officers saw behavior consistent with behavior that preceded the very violent activity two night before when we actually had a Metropolitan Police Department that was set on fire.”

He continued: “significant arrests of multiple folks who were in violation of the curfew,” but said the arrests were made “safely and respectfully as possibly” and the use of pepper spray was “limited.”

Rahul, however, who offered his house as shelter to protesters, told a different story.

“If you had seen what was going on in front of my eyes, there was no choice,” he said to BuzzFeed. “People were getting pepper-sprayed and beaten and slammed to the ground.”

Rahul said his house became chaotic as people tried to use water and milk to lessen the effects of the pepper spray.

“I went upstairs to the bathroom and people were running water in the tub, splashing water on their faces,” Rahul said. “It was pure bedlam in here as the police had just unleashed hell and pinned these people in.”

Rahul said he ordered pizzas for the hungry people stuck inside his home, but the police “hijacked” the order and refused to let it be delivered to the front door.

Other protestors, meanwhile, accused the police of lying to try and get into the home by saying someone had called for a 911 emergency.

Fortunately, volunteers managed to arrange for near on 20 cars to carpool the protesters home from Swann Street after the curfew lifted at 6 a.m.

Of his heroics, Rahul said: “I think 95% of people in this world would have absolutely held that door open and would have grabbed people into any sort of shelter if they had seen what I had seen.”

Of the protesters, he continued: “They’re the ones out there who got sprayed. I just held a door open. They’re the heroes. They are America.”

Thank you, Rahul. You’re a true American. Everyone has the right to peacefully protest, and no one should be harmed in the process of doing so.