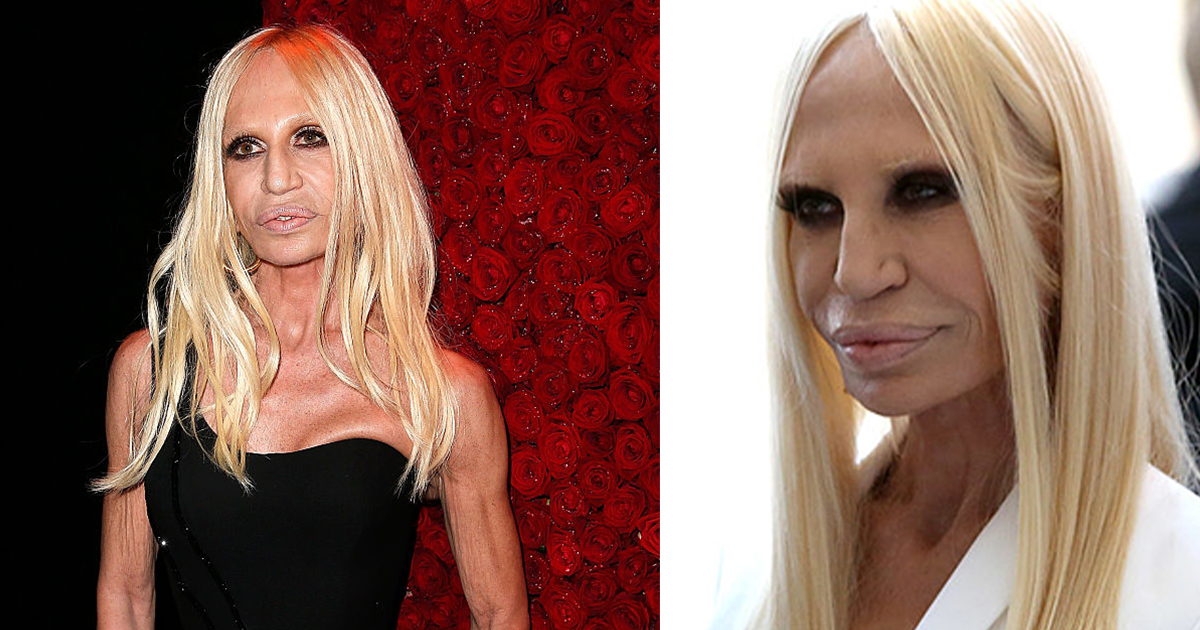 The Italian-born part-owner of the Versace fashion line had natural lips and smooth skin at a young age.

But looking at her life today, she’s almost as famous for her dramatic beauty transformation and her alleged love for plastic surgery.

For many of us who have followed Donatella Versace through the years, she looks almost unrecognizable today.

But the fact is that Donatella started to change her appearance already when she was 11 years old while growing up in Italy.

“I was not born fantastically beautiful, but I always wanted to be impressive,” she told The Guardian.

Born on May 2, 1955, she was the youngest child in a sibling group of four. Her father worked as a salesman, and her mother made dresses.

Of course, it’s hard to explain how Donatellas childhood formed her without including Gianni Versace. Her brother would become one of the world’s most famous designers and reach immortal fashion status.

Donatella grew up with Gianni and her other brother Santo Versace in Reggio Calabria. Unfortunately, the family suffered a devasting loss when Donatella’s sister Tina passed at age 12. Tina died of a severe bacterial infection that was treated improperly.

Sister died due to a mistake

Just like Gianni and Santo, Donatella was strongly influenced by her mother. She used to play in her mother’s basket of fabric, which was placed in the middle of the room when she worked with her dresses.

Gianni and Santo were eight and ten when Donatella was born, but the siblings formed a strong relationship.

Gianni had clear ideas and a powerful will – it was he who convinced Donatella that she would dye her hair platinum blonde when she was 11. The reason? Gianni was a big fan of the Italian singer Patty Pravo and wanted his sister to look like her.

“I was his doll and his best friend. He dressed me up in cool clothes, took me out to discos and clubs from when I was 11. I loved it. It was the best time of my life,” Donatella told The Guardian.

Donatella and Gianni would develop a solid sibling bond over the years, but people had opinions about how equal it was. Of course, Gianni was the brightest star – but it had consequences for Donatella’s career.

In the mid-1970s, she studied literature and languages ​​in Florence, Italy. But every weekend she went up to Milan to visit her brother Gianni, a one-way trip of just over 2 hours. Even though they were nearly a decade in age apart, Gianni and Donatella enjoyed each other’s company.

The idea was that Donatella would also start working for her brothers’ PR department, but Gianni objected. The brother wanted her to act as his “muse and critic.” She was more valuable to him as a trend-spotter, according to Gianni.

“Donatella filled an indefinable role of muse, sounding board, and first assistant . . . Donatella became Gianni’s shadow in the atelier [and] had a great knack for sizing up a dress or a pair of pants or a color palette and deciding whether it had that mysterious quality that would make it trendy,” expert Deborah Ball wrote in her book House of Versace in 2010.

Gianni decided to build his fashion empire together with his family. As he conquered the world, he had Donatella as vice president and his brother Santo as president of the company.

Throughout his glory days, Donatella always stood by her brother’s side.

”There was Santo, the calm one; Gianni, the enfant terrible, and me – Gianni’s accomplice,” she said when describing the trio of Versace.

Donatella also ran her own projects in the ’90s and made a name for herself as Versace launched Versus, Donatella’s own label. Formally, Gianni was in charge, but Donatella was the one who had the sole creative responsibility for Versus, which was launched in 1989.

Indeed, there is a before and after Gianni when describing Donatella’s life. In 1997, Donatella’s entire world crashed when her brother was shot to death. She lost her best friend and a brother.

And she mourned him when an entire world wondered what had happened and when all the world’s tabloids focused on the aftermath and manhunt.

After the attack, Donatella and her family fled to a private resort in the Caribbean. Santo inherited 30% of the company, and Gianni’s daughter, Allegra Versace, received 50%.

Donatella took over the creative control of the design house, but the time after Gianni’s death developed into a nightmare. She partied hard and dealt with addiction. She focused on her appearance and described it as that she “tried to be Gianni’s doll.”  It got so bad that Elton John staged an intervention for her after she had a meltdown at her daughter’s birthday.

“For the first five years, I was lost,” she says. “I made a lot of mistakes.”

But if the first years after Gianni’s death were turbulent, Donatella eventually found herself and excelled as chief designer. She had been a person who always listened to others, but finally, she decided to listen to herself. Donatella realized that her brother had trusted her for a reason.

”Donatella is very much the image of the company. He (Gianni) made strong, sexy clothes for strong sexy women. She was the girl he was designing for,” designer Marc Jacobs said in 1997.

With growing self-confidence, Donatella came to take Versace in a new feminist direction. In 2005, she did a high-profile advertising campaign with Madonna that marked a fresh start. The world-famous artist would symbolize Versace’s image of the glossy and hard-working woman CEO who was not afraid of anything.

”A high-level working woman that does not renounce glamor when she’s in the office,” Donatella told Italian Vanity Fair at the time.

Donatella has never been afraid to speak about her views on feminism and femininity. The matriarch has criticized male designers for just sitting at the drawing board and sketching on unrealistic dresses without thinking that the clothes should actually fit.

“For a woman to have credibility, they have to work three times more than a man. I sit on the board of directors, I’m the only woman! And I dress some of the most powerful women in the world. So I think I’m a feminist. I show to women, you can do it,” Donatella says.

No one really knows the details on how they first met, but we know that Donatella Versace married American model Paul Beck Paul in 1983.

According to some sources, Donatella wanted Paul to start modeling for Versace in 1980, and the couple fell in love.

Allegra currently works as a director for Versace and inherited 50 percent of the company when her uncle died in 1997. Overnight, she suddenly became a multimillionaire – but Allegra waited until she was 24 years old before working within the company.

Both Allegra and Daniel grew up outside Milan in Italy. They were closely guarded and lived a structured life. Allegra loved ballet and took classes to become a dancer, an interest she inherited from Gianni. Gianni and Allegra were very close until his death.

Donatella, who was busy running an fashion brand, was far from an ordinary stay-at-home mom.

“I’m sure I made a lot of mistakes with my children, but if you stay home, I think you make more mistakes,” Donatella told Vogue in 2013 and continued:

“Of course, mother is the first thing. I was travelling a lot when the children were little, but I made sure that the time I was spending with them was quality time.”

Donatella has actually been married twice in her life, but her second marriage barely began before it ended. In 2004, Donatella tied the knot with Manuel Dallori, an Italian businessman and entrepreneur. A year later, the couple divorced.

For decades, Donatella Versace has been one of the most influential women in the world. She has power, money and it’s evident that many women look up to Donatella, and many have an opinion about her.

With her long platinum blonde hairstyle, her deep tan and huge lips, Donatella’s looks and bon vivant lifestyle have always been up for debate. But many experts and fans have felt that the fashion queen went too far in changing her appearance in recent years.

For example, Daily Mail wrote that Donatella had “transformed herself into a human waxwork with Botox, implants and laser resurfacing.”

Donatella has never commented on whether she went under the knife, but the tabloids have speculated what kind of beauty lifts the iconic designer has done. Several plastic surgeons are convinced that Donatella has done several ”jobs” on her body.

In 2014, Dr. Katz from Juva Skin & Laser Center in NYC told HollywoodLife that he believed that Donatella “had her cheeks augmented, probably with filler and certainly her lips have been filled, her eyelids are a little droopy. I think she has had some bad Botox because they look like they are drooping. Maybe a little too much Botox in the forehead. She certainly can use some filler in her ear lobes, they are very stretched.”

Donatella has had something of an addiction mentality – she was a chain-smoker many years, and there are reports that all her tanning sessions made her skin age faster than what’s normal.

Today, the 66-year-old Donatella Versace works as both artistic director and vice president of the board of Versace.

She’s still one of the most influential and powerful designers globally. In 2022, she again made headlines as she fronted the new Versace campaign herself, alongside supermodel sisters Bella and Gigi Hadid.

“Family is always at the heart of everything I do, which is why I love Bella and Gigi so much. They perfectly exemplify the strength between sisters, and they share that message to our Versace sisterhood worldwide,” Donatella said in a statement.

No matter what you think of Donatella and her life choices, I have to admit that she has made a big impression on me over the years.

Despite many setbacks and personal tragedies, she has made a strong comeback, and when her life is summed up, she will definitely be remembered as one of the most excellent designers we have ever had.