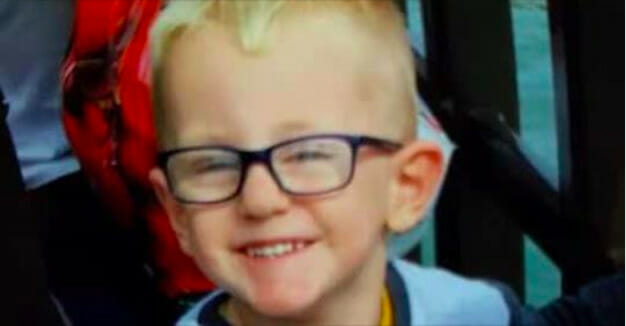 All kids are adorable. But there’s just something about 3-year-olds. This has to be my favorite age when it comes to children — they are old enough to understand enough to keep us baffled with how they think and what they say, but still young enough for us to be drawn to their precious innocence.

So when I read this story about one such child — 3 year old Leo Durrington from Leigh, UK — my heart shattered.

Leo was the victim of an absolutely gruesome, brutal accident — an incident which has left the small boy critically injured in hospital. Now, his parents are pleading with the public to help them find the monster who is responsible for putting him there.

Leo is a typical 3-year-old boy. Full of life, plenty of questions and loads of charm, his parent of course love him with all their heart.

But their hearts are now shattered to pieces as Leo remains in critical condition in hospital — following a senseless hit-and-run accident.

A stolen white van was being pursued by police when the incident occurred. While being pursued by the police, a stolen van collided with the boy but failed to stop and fled on. The police stopped and administered first aid to the boy, who was then transported to hospital.

“This was a horrendous incident that has left a three year old boy in hospital fighting for his life and we are doing all we can to support his family at this incredibly difficult time,” Inspector Danny Byrne, of GMP’s Serious Collision Investigation Unit told Leigh Observer.

“Our investigation is continuing very quickly as we have deployed several resources – including the helicopter and police dogs – to support our efforts to trace those responsible.”

The police are now urging members of the public to help in their pursuit of those responsible for stealing the van — and most importantly putting Leo’s little life at risk.

“The driver showed absolutely no regard for Leo or his family as he fled the scene and continues to evade police. The van we have recovered has damage to the passenger side headlight and is missing the passenger side door mirror. We have released images of the van and are appealing to anyone that saw it over the last couple of days to give us a call,” Police Sergeant Lee Westhead of GMP’s Serious Collision Investigation Unit, said.

The van was later found abandoned and police have released photos to help with their investigation.

“Myself, along with Leo’s family are urging anyone with any information to please get in touch as a matter of urgency,” Sergeant Lee Westhead added.

One may also give an anonymous tip through the independent charity Crimestoppers at 0800 555 111.

This is a simply horrifying incident. Please help spread this article so the culprits can be found and be swiftly and severely punished for their monstrous act. Leo and his parents deserve it!