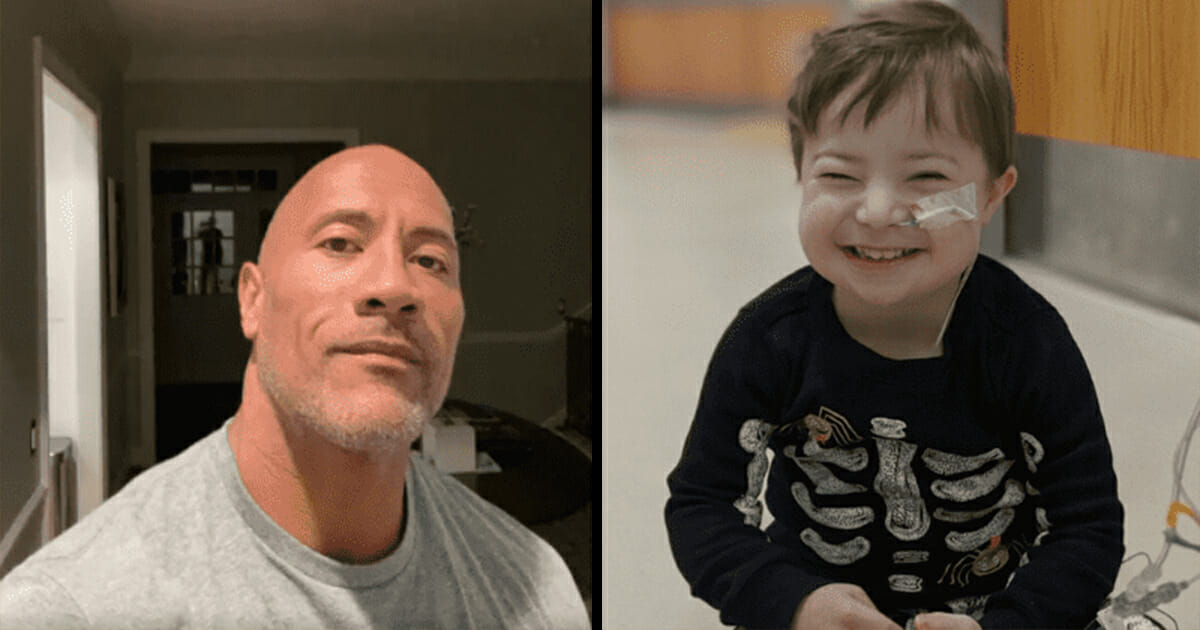 When it comes to the good guys of Hollywood, they don’t get much more legendary than Dwayne ‘The Rock’ Johnson.

The 47-year-old actor is an inspiration to millions around the world, as well as being talented on screen. To top it all off, though, he’s a renowned family man with plenty of love for his partner and children.

It might come as little surprise, then, that Johnson’s name is doing the rounds again in the media after filming a sweet tribute for a 3-year-old fan suffering from Acute Lymphoblastic Leukemia.

In a recent Instagram post, the former WWE star wrote: “This request came across my desk and punched me in the gut a bit. There’s a little 3-year-old boy out there named, Hyrum Harris. Diagnosed with acute lymphoblastic leukemia which is complicated by Down Syndrome.“

Once Johnson heard that Hyrum is a fan of Maui in the Disney film Moana, he realized he knew just how to make his day.

He sang the song You’re Welcome from the film, as well as sending Hyrum his very own shout-out and a heartwarming message.

“His name is Hyrum Harris. Hello Hyrum, I hope this message gets to you. You don’t know me, my name is Dwayne Johnson, I also go by The Rock and you’re probably thinking, ‘Of course you by the name of The Rock because you have a head the size of a rock!’“

At the end of the video, The Rock said: “I know you’re like, ‘Dude, leave the cool singing to Maui.’ You’re absolutely right, Hyrum. I wanted to tell you, man, stay strong. There’s another dude out there, me, Dwayne, who, like you, loves Maui too. There’s no one like Maui. He’s the coolest thing. I’m a big fan of Maui, too, and I’m a big fan of yours. Thanks for inspiring everyone around you, including myself. Stay strong, Hyrum.”

Needless to say, Johnson’s message was well received, not just by fans around the world, but also by Hyrum’s family, not least his parents April and Rich Harris.

April told PEOPLE: “This has been such a moving experience for our family. [Johnson’s] response was beautiful. Every time Dwayne mentioned Hyrum’s name, Hyrum pointed to his chest and in his soft sweet voice repeated saying, ‘Hyrum,’ as though he knew this was special for him.

“When the reference of a head being compared to the size of a rock [came], Hyrum giggled. When he began to sing, Hyrum’s eyes got very wide. He looked at me. Smiled so big. Sang ‘You’re Welcome’ right along with the video. It was touching. Hyrum’s smile is infectious [and] healing to those that serve him and love him.”

A GoFundMe Page is available for anyone who would like to donate to Hyrum’s cause. Click here to find it.

Thank you, Dwayne Johnson, for making this little fighter’s day!

We’re sending all our thoughts and prayers in Hyrum’s direction. Share this article on Facebook to join us in giving well wishes.