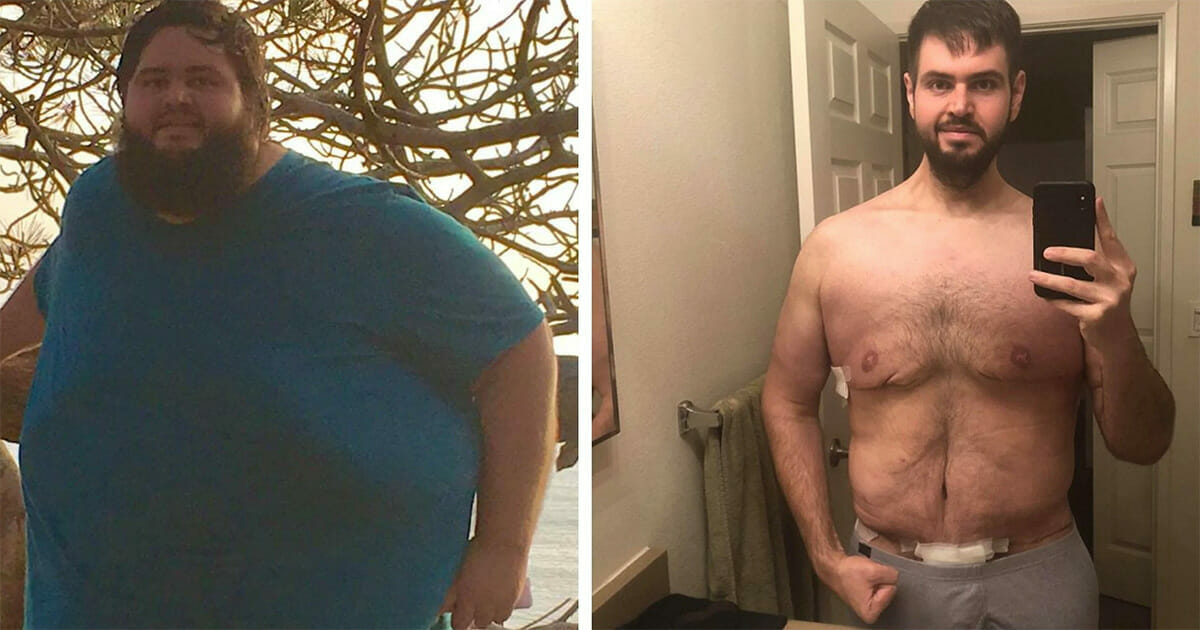 Getting married is up there as one of the happiest days of our lives.

When the proposal is accepted and the excitement has died down the preparations can begin, but for some it’s not just about organizing the party but also about wanting to look your best.

For 29-year-old John Allaire, his childhood sweetheart saying yes was a turning point in his life which led him to lose over 300 pounds.

John Allaire proposed to his high school sweetheart Caila in 2015 and she accepted.

But, his happiness was overshadowed by the need to change his life, namely his eating habits.

“She loved me as I was and she was ready to commit to marrying me at 540 pounds, which is mind-blowing, really,” he said.

John, from Florida, had taken his parent’s divorce hard and to help him through it had comfort ate. At 18 years old his father died and he spiraled, continuing to gain weight.

He had to use a commercial scale at a local fish house to weigh himself.

But after the love of his life said yes it was the encouragement and boost he needed to turn his life around. He started juicing and walking three to four times a week.

When he married Caila in early 2016 he had lost 20 pounds but knew he was nowhere near the weight he wanted to be.

My transformation so far!

“I remember just looking at myself in the mirror and just thinking I didn’t even look human anymore,” he told The New York Post.

Caila, who was in the Navy, had to relocate to San Diego so John had to leave his job but instead of finding a new one he decided to commit to his health and weight loss full time.

“There is no way that I can, in good conscience, drag this woman through the difficulties that I am going to go through the rest of my life if I don’t lose weight,” he said to The Daily Mail.

He joined Camp Transformation and the weight continued to drop off until he had shed over 300 pounds, thanks to the support he received and kicking his junk food habit.

First update in a long time! Hello to all those who recently followed! I just wanted to post an honest picture showing where I am at post surgery. As you can see I still have swelling and still need to get fully back to pre-surgery shape. Still working out though! I just recently found a new fitness group here in Japan and I’ll have more to share from my workout with that class. There is no question I am #blessed! #AllGlorytoJesus . Life has been nuts since leaving California for Japan. We are still living out of hotels and getting settled- but as we do settle in, I intend to post a lot more on here. Look forward to interacting with everyone more very soon! . . . #weightlossjourney #postsurgery #longwaytogo #cantstopwontstop

John then had the problem of his 16 to 20 pounds of excess skin which he was able to put right with surgery thanks to doctors performing the procedure for free after he appeared on The Doctors.

The couple now live in Japan where John is enjoying his new healthy lifestyle and slimmer body.

“I was remarking to my wife just the other day, that it’s not lost on me how l can bend down to tie my shoelaces without thinking about it—without having to find a place to sit down and finagle my feet high enough to tie them,” he told The Daily Mail.

“If you told me two years ago that I would be the size I am now and I could fit into a medium shirt, I would tell you you’re crazy,” he added.

FORGET COFFEE! Nothing wakes you up and gets you #pumped and ready for the day like an intense #workout that blasts your #heartrate! Thank God this hotel has a pretty #legit #gym! #sweat #trainhard #goals #grind #cantstopwontstop #fitness #fitnessmotivation #fitnesslifestyle #weightloss #weightlossjourney #weightlosstransformation #healthylifestyle #roadtrip #ontheroad #blessed #godisgood

Such an inspiration to all those people who want to achieve a healthier lifestyle.

Please share so more people can read about the amazing John and his incredible weight loss.