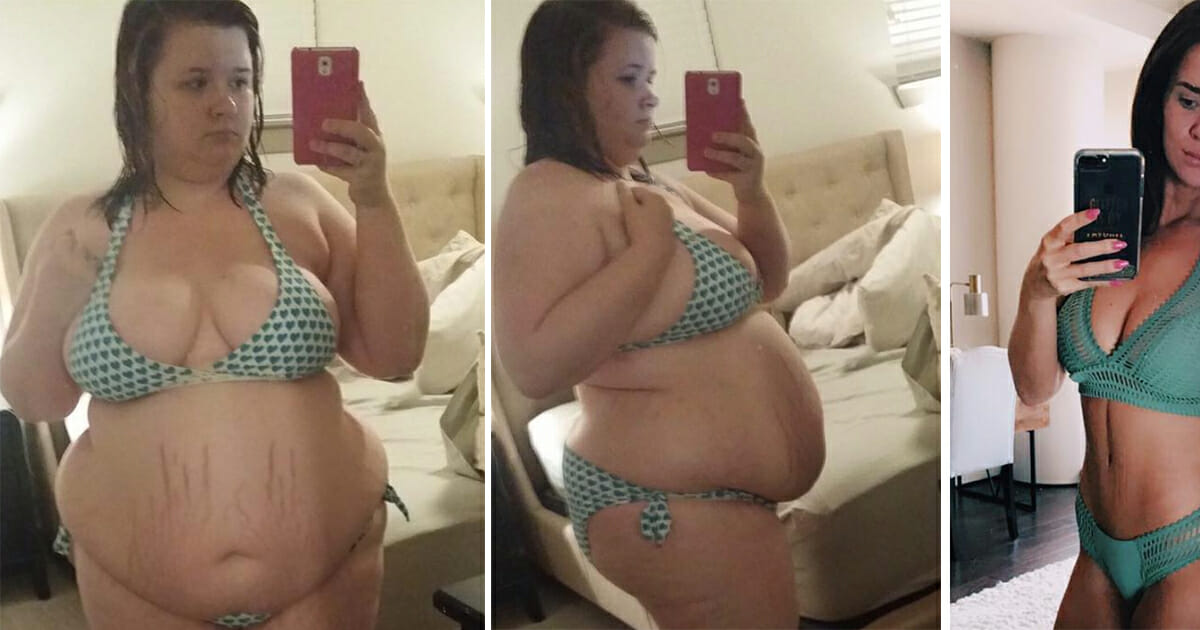 Positive transformations should always be celebrated in today’s world. If someone has mustered the courage to go through with a personal journey then they deserve to be applauded.

Which is why I feel it necessary to share the story of 28-year-old Christine Carter. When she was dubbed ‘a hippo’ by her then-boyfriend, she decided to strip the fat from her body, resulting in an epic change that saw her get rid of an unsupportive other half and lose 150 pounds.

Her tale is certainly worth a read for anyone seeking inspiration …

When Christine Carter was called a hippo by her former boyfriend, she felt annoyed and challenged.

At the time, Christine weighed 275Ibs. It was then that the thought of weight loss first entered her mind. As per TODAY, she underwent gastric sleeve surgery in 2014 and managed to lose 50 pounds as a result.

Three words to describe me before weight loss: afraid, timid, and a doormat. I had no hustle. I had no drive. I had no strength left. I was so depressed it was hard to even get out of bed in the morning. I didn’t need a physical transformation… I needed a TOTAL transformation of mind and body. Through this process I fell in LOVE with the idea of designing my life. It didn’t matter who I was right now. It didn’t matter who I had been. All that mattered was who I was BECOMING. This was the mentality that helped me stick it out-once and for all. Along the way I found my hustle. I found my drive. I found my perseverance to succeed no matter what. Did I have struggles? Yes. Did I fail? Yes. But I found the STRENGTH to press on. What kind of life are YOU designing? . #tribestrong #weightlosshero #wlhtribe #weightlossjourney #weightlossmotivation #weightlosstransformation #fitspiration #extremeweightloss #wls #keto #vsg

Then, determined to return to the way she looked before, Christine began a strict routine of eating clean and exercising daily.

“I realized I was going to fail again if I didn’t fix my mindset,” Carter said.

“I realized that the surgery was only a tool and you can still ‘out eat’ it.”

She continued: “I didn’t miss a single workout and I didn’t have a single cheat meal, and I lost another 90 pounds by November.”

I didn’t feel like I could stop eating. . While eating one meal…I was thinking about the next. . I would think to myself “What’s wrong with me??? Why am I like this?? I didn’t used to be???” . I hoped weight loss surgery would help my food addiction. . Yep. I said it. ADDICTION. . But…even with my restriction from surgery, I just found more creative ways to eat my feelings. (Particularly things that don’t take room: Frappuccino’s, Red Bull’s, popcorn, and chips were big culprits for me.) . This is why I regained my weight after I could eat solid food again. . It took me a long time to admit I was addicted to food. We’re conditioned to fear the ‘A’ word. . But getting gut wrenchingly honest is the only thing that saved me from myself. . I knew I had to cut the addiction off at its source. I was eating because of emotions…yet taking away sugars made me MORE emotional!!! . But over time, and with a lot of support, I learned to recognize my thought patterns and redirect them. . Unlike other addictions: you can’t run away from this one. FOOD IS EVERYWHERE. From words on the radio to your lunch room at work to your IG feed. . What you CAN do is start with your truth. Come up with a plan. Find a support system. And understand that while old habits die hard…they CAN and WILL be replaced with better habits. . I don’t miss bad foods anymore. And I PROMISE…you can get there too. ❤️

The product of her hard work is certainly a body to be proud of. And the most bizarre part of it all? When Christine began to shed the weight, her ex-boyfriend – the same one who called her ‘a hippo’ – was unsupportive of her objective. He started to grow jealous, and so she left him in order to help herself.

The biggest mentality that I had to learn was to NOT “wait til Monday”. . Seems like Monday never comes. But the days leading up to it, you eat everything in sight in preparation for that day. . Our lives are the summation of our daily habits. Even if you can’t be 100% today-you can make at least ONE healthy choice to get started in the right direction. . Start with drinking more water. Start with taking vitamins. Start with a ten minute walk. It all starts…with one step in the right direction.

I think we can all agree Christine’s transformation is something special. What fantastic character she showed to be able to see through her journey after everything. If you’re impressed, you can see more from her at her Instragram page.

If you struggle with weight problems, or indeed any physical/mental issues, and have aims and goals of your own, let Christine be a perfect example that it can be turned around so long as you put your mind to it.

Help us spread Christine’s story by sharing this article on Facebook!