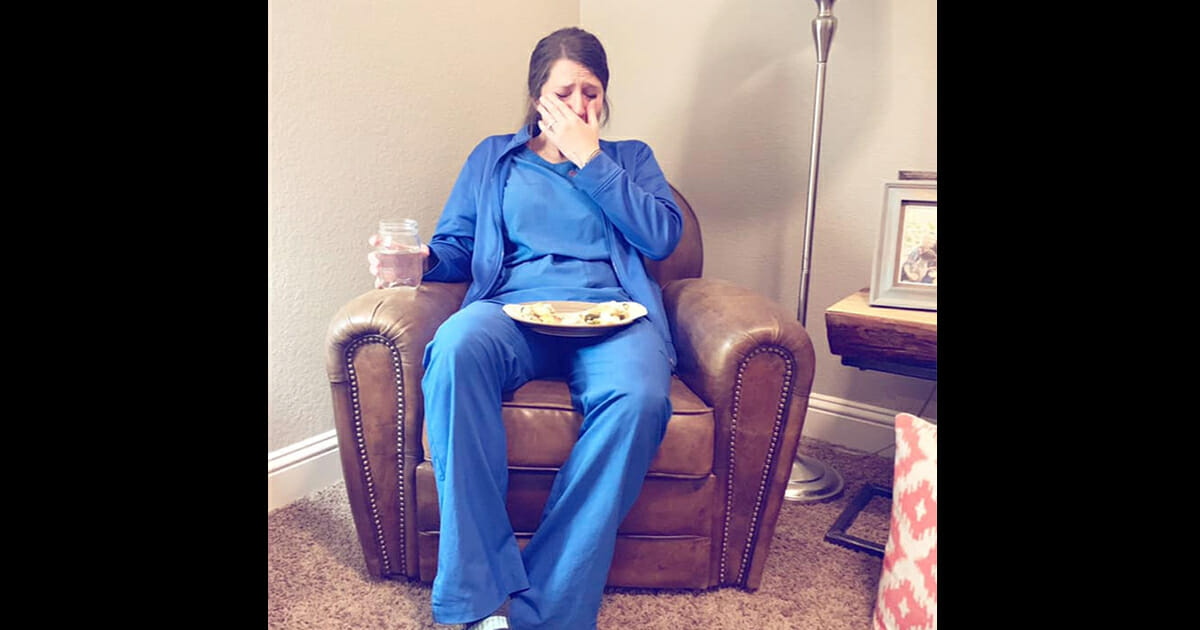 We have many unsung heroes in society, those who do jobs and fill roles both taxing and largely unrewarding. Take nurses, for example, who more often than not run themselves into the ground to ensure their patients are cared for and comfortable. In recent years more of a spotlight has been shone on nurses and the often gruelling hours they have to do for, frankly, terrible pay. Even so, it hasn’t been enough to change things for the better, not really. A picture depicting an exhausted nurse mid-breakdown has gone viral on Facebook, exposing the stark reality of the conditions many of them are forced to work under. Caty Nixon was so overwhelmed following a string of lengthy shifts – one of which included delivering a stillborn baby – that she was reduced to tears when she got home. Her twin sister, Laura McIntyre, took a photo of the moment, and her accompanied post has opened a lot of eyes.

Laura, from Forney, Texas, shared the photo of her sister, writing: “This pic is from a night back in July where she came to my house after a particularly hard day.

“She delivered a stillborn. have you guys ever really thought about what a labor & delivery nurse sees?

“They see panic & anxiety when a new mom is scared. ‘They see fear when a stat c-section is called. They see peace when the mom has support from her family – bc not all new moms do.

“They see teenagers giving birth. They see an addicted mom give birth to a baby who is withdrawing.

“They see cps come. They see funeral homes come. Did you know that they have to make arrangements for the funeral home to come pick up the baby? I didn’t either.”

she's gonna kill me for this pic, but can we just give it up for nurses for a minute?•caty just wrapped up her fourth…

Caty had no idea that the photo has been posted, but in it her sister explained how she had worked 53 hours in three days, including a shift wherein she delivered a stillborn baby.

Needless to say, the post has been a terrific success, accumulating more than 157,000 likes and 96,000 shares since it was uploaded on October 11.

Caty herself remains characteristically modest about the work she does, telling Good Morning America: “The best part of nursing is making connections with people, being the calm in the storm, being their cheerleader when they need encouragement, and being the shoulder to cry on when they are hurting.

“The worst, though, is knowing that even when you’ve done everything you can for someone, we’re not able to change the outcome (for fetal loss, poor prognosis, etc.); always feeling like you have to be strong for your patient – when on the inside, you are falling apart.”

We all know that nurses deserve better pay and better working conditions. They are true heroes within our society, and so often forgotten about.

Just imagine nurses were given the positive attention many people give celebrities? After all, they save lives every day and do a job most people couldn’t and wouldn’t want to do.

Share this article to show you stand with nurses. Together, we can make a change.