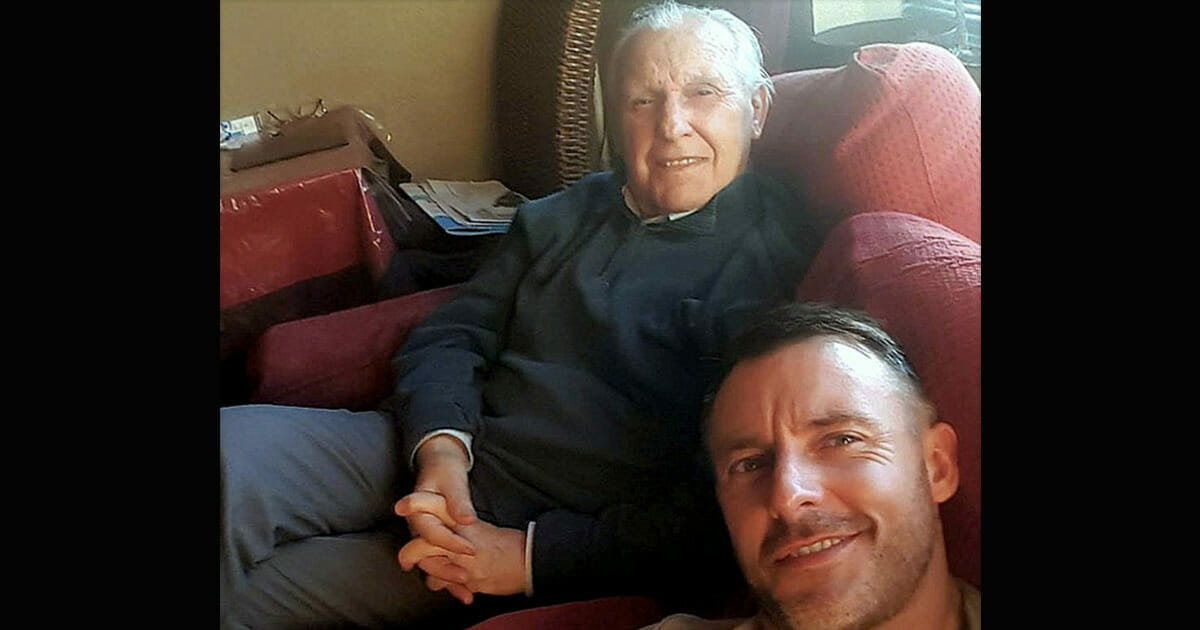 Anyone who’s ever watched a loved one’s decline as a result of Alzheimer’s can tell you how truly terrible it is. The disease, which causes a gradual breakdown in brain tissue, leaves sufferers with greatly impaired memory, meaning they’re left vulnerable and confused.

Of course, aside from the fact it exacts an incredible toll on sufferers, it can also hit hard when it comes to family members and close friends.

Ted McDermott developed Alzheimer’s a number of years ago, and it was a source of great pain for those around him. In addition to his memory deteriorating steadily, he also experienced mood swings, and could become aggressive unpredictably …

Fortunately, his son Mac devised a trick to help his father get his memory back, if only for a few minutes at a time.

Music had always been one of Ted’s great passions in life. When he was younger he’d travelled around the UK performing in pubs and nightclubs.

As he grew older, however, his memory began to fail him, and it became more and more difficult for him to perform.

Mr Innocent. "Have you seen that fella?""Which one?""The gaffer… him that sings high pitch""Well that would be me…

Posted by The Songaminute Man on Friday, 16 November 2018

But despite the fact Ted can no longer tour, he still retains his passion for music.

“Dad was a singer all his life – he was a Butlin’s Redcoat and then traveled around singing in clubs around the country. He worked in a factory after he got married and still did the bit of singing on side,” Mac said.

“His nickname is ‘The Songaminute Man’ – simply because of how many songs he knows.

“In the last few years his memory has deteriorated a lot – often not recognizing family and with many aggressive episodes.”

Out now in all good bookshops or order now on Amazon. UK: http://amzn.eu/d/dJRBGdrUSA: http://a.co/d/dcXmQ7w

Posted by The Songaminute Man on Tuesday, 4 September 2018

The episodes of aggression are tough for everyone, and Ted can be difficult to handle at times.

Mac, however, has always been determined to enable his dad to continue doing what he loves.

"All that matters – is that you're happy" Here he is mid-dessert.

Posted by The Songaminute Man on Saturday, 25 August 2018

It wasn’t long before he stumbled upon a brilliant plan.

When Mac sees his dad beginning to slip away, he puts on one of his favorite songs and starts to sing. Ted frequently remembers the lines to these songs, and joins in.

Posted by The Songaminute Man on Monday, 13 August 2018

These small, cherished moments mean Mac gets to spend more time with the man he remembers. It also gives him the motivation to keep going with what he’s doing.

Mac and Ted have also started to record their songs so that more people can get involved with them. The family hopes their little trick can help others with Alzheimer’s deal with their symptoms.

Posted by The Songaminute Man on Saturday, 4 August 2018

Furthermore, Mac and Ted have also started a fundraiser to bring in money to produce an album. Mac has promised they will donate 25 percent of the revenue to help fund Alzheimer’s research!

Watch Mac and Ted in action together below:

Life is trying for both Mac and Ted sometimes, but at least they have each other.

Together, they’re helping to raise further awareness of Alzheimer’s through their music.