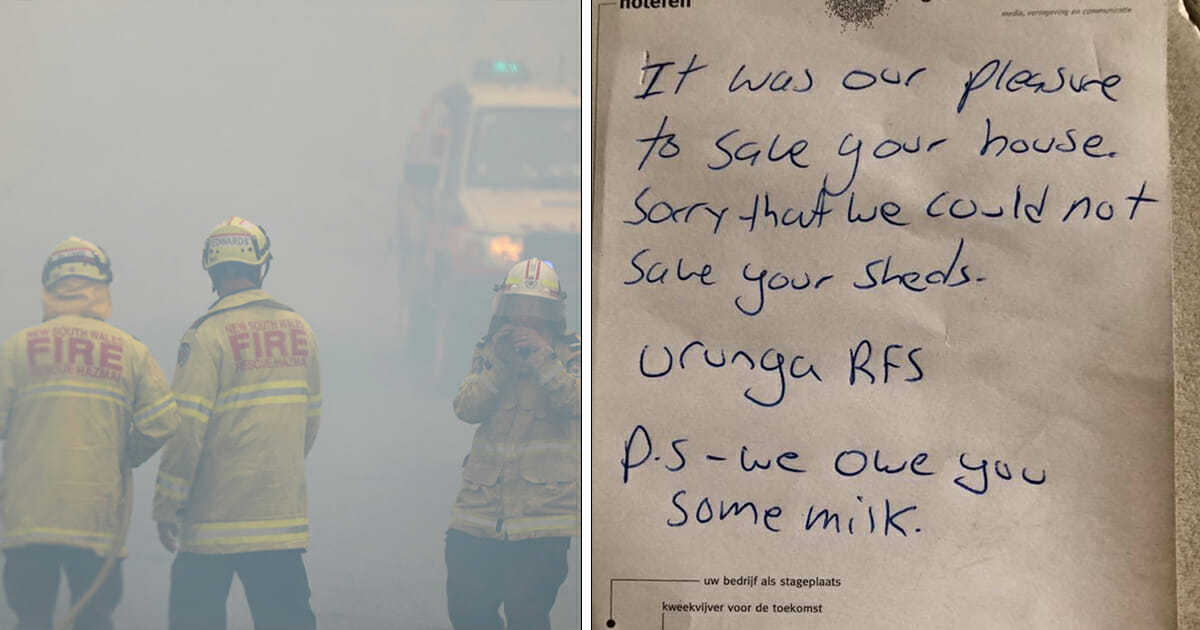 Firefighters are true heroes, running towards flames as others run away from them, often doing unthinkably heroic deeds to save lives.

It also turns out they have a killer sense of humor. Well, at least that’s if we’re to go off a group of firefighters tackling bushfires on Australia’s east coast.

Paul Sefky has shared a note left to him by the men after they saved his home … but drank all his milk in the process.

Bushfires are currently ravaging large swathes of Australia’s east coast – at the time of writing there are upwards of 85 blazes in New South Wales alone. So far, three people have lost their lives, while hundreds of homes have been destroyed.

As a result, Sefky would have been forgiven for fearing the worst when he returned to his home in New South Wales over the weekend. His house remained intact, however. Moreover, there was a note left behind in his kitchen.

The note, signed by the Urunga Rural Fire Service, reads: “It was our pleasure to save your house. Sorry that we could not save your sheds. Urunga RFS. P.S – We owe you some milk.”

Somewhat unsurprisingly, the note went viral after Sefky uploaded it to social media. It reached so far, in fact, that the fireman claiming to have written the note saw it.

Kale Hardie-Porter commented on the post, saying he was part of a four-man team who “did the best we could with what we had”.

“We took refuge in your house for a moment and that’s when we discovered the fridge… Again it was our pleasure to do a little good in such horrendous conditions. All the best in future!” Hardie-Porter wrote.

Despite the fact that Paul’s home was saved, the wildfires remain a serious problem. Six million people reside in the affected region, and many of them have been forced to flee their homes.

We’re sending our thoughts out to all those affected by the fires, as well as a huge thank you to all the brave firefighters tackling them.