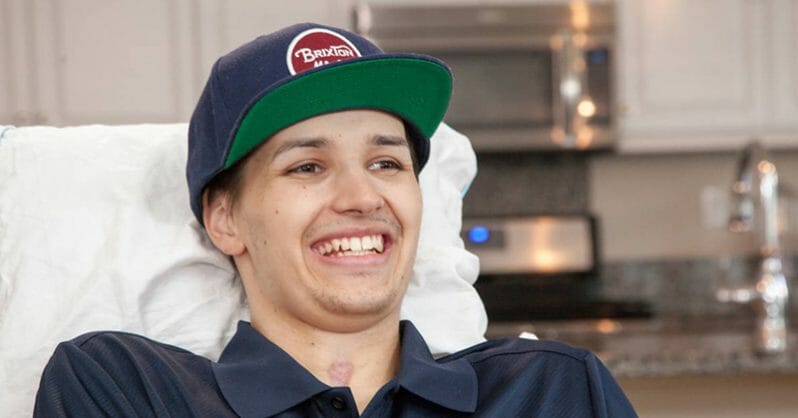 Kristopher Boesen might have considered himself lucky to survive a serious car accident, but his life changed forever all the same.

Boesen lost control of his vehicle one day and collided with a tree and a lamp post. The crash didn’t claim his life, but did leave him paralysed from the neck down. Doctors feared he would never be able to again dictate what his body did.

Then he was offered an experimental treatment involving stem cells. It was a procedure designed to repair damaged nerve tissue by replacing the cells. There was no promises made, no guarantees given, but Kristopher knew he had to try.

And so he opted for the treatment, led by Charles Liu, MD, Ph.D., director of the USC Neurorestoration Center. Lui’s surgical team joined forces with Rancho Los Amigos National Rehabilitation Center and Keck Medicine of USC, and an experimental dose of 10 million AST-OPC1 cells was injected into Kristopher’s cervical spinal cord.

A dedicated army of nurses, doctors, rehab specialists and other medical professionals helped Kristopher prepare for the therapy. He had to be able to provide voice confirmation of his willingness to take part in the study, as well as be able to breathe without his ventilator.

The weaning process usually takes as long as three weeks, but Kristopher was able to blitz through it in five days. He signed the paperwork, did the necessary scans and all the pre-surgery tests. Even so, he was jumping into a great unknown by undergoing the surgery: no one was entirely sure what the results would be.

As Dr. Lui explained, patients usually undergo surgeries to stabilize their spine, with the process not usually restoring much motor or sensory function to the area.

And yet the procedure Kristopher underwent produced practically remarkable effects. After just three weeks, Kristopher noticed an improvement. Within eight weeks his motor functions had improved, and he could do things like answer the phone and move his wheelchair.

Three months later, Kristopher could brush his teeth, work a computer, and had great mobility back in his arms and hands.

Kristopher was given something many victims of such accidents spend their lives in search of: hope. The positive results of the stem cell surgery have changed his life for a second time.

Now, Kristopher’s aim is to one day be able to walk again. Doctors have made him no promises regarding improvements he might make in the future, but they will continue to work towards a future wherein issues such as the one Kristopher faces can be fixed.

The wonders of modern science never cease to amaze me. We’re so happy Kristopher has another chance at life, all thanks to the genius and hard work of the medical professionals vying to save lives.

Share this article if you want to give praise to the doctors, nurses and medical professionals out there.