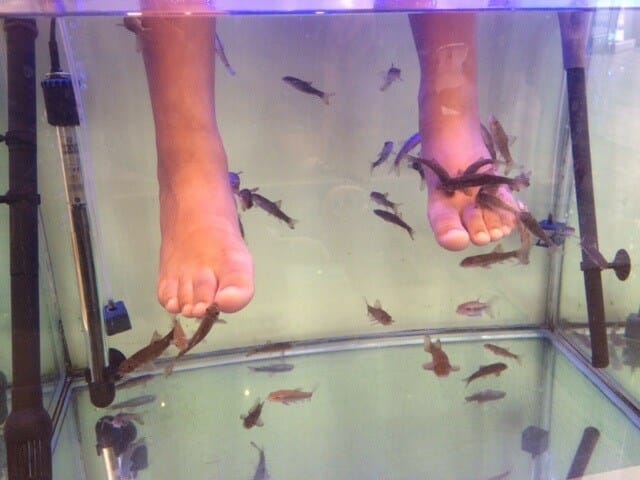 A few years ago, while holidaying in Spain, I saw a small fish tank beside a chair in the middle of a square.

Curious, I walked over and asked what it was. The woman sat down beside the tank explained that one could put their feet in the water and have the little fish “clean” their feet for them.

I was on holiday, so thought ‘why the hell not’. It tickled, felt slightly uncomfortable and took some getting used to, but the results were good, from what I can remember.

A couple of years later it occurred to me that the whole process wasn’t too hygienic. How many feet had been in that water before I got there?

Since then, there’s been a boom of “fish pedicure” stations. They’re far more popular than they once were – I came across one in my local mall the other day.

After doing some digging, I found out some interesting things. I’ve decided to share the reasons why you should have a good think before putting your feet in these tanks …

What is a fish pedicure?

To allow fish to eat away dead skin and hair is a growing trend around the globe.

The Garra rufa fish, otherwise known as the ‘doctor fish’ eat the dead skin from off of people’s feet. By this method, the fish ‘clean’ a customer’s feet, removing any excess or waste.

However, according to certain reports, these fish are being handled without any thought to their well being. In some parts of the United States and Canada, the practise has been stopped entirely for hygienic reasons.

Studies in Britain have shown that the fish can carry several types of bad bacteria, including cholera. The British Infectious Disease Institute HPA deduced that both the water in the tanks and the fish themselves can spread antibiotic-resistant bacteria and diseases to humans.

As yet there hasn’t been adequate research done in the field to provide conclusive results, so no one knows for sure just how “dangerous” the practise is.

However, it’s well known that stagnant water can be a breeding ground for mycobacteria and vibrio bacteria – two types that can cause infections in humans.

When you should avoid fish pedicures

What you need to know is to never have a fish pedicure if you have wounds or sores on your feet or lower legs.

It’s also suggested that people who suffer from diabetes, have an impaired immune system or known blood infection don’t undergo the treatment either.

In a few instances – admittedly rare – people have reported contracting infections as serious as MRSA after having a fish pedicure. Such viruses can be extremely difficult to counteract and treat successfully.

Then there’s also the fact that people suffering from contagious diseases, such as athlete’s foot and nail fungus, commonly seek out fish pedicures for treatment. Obviously the fish themselves can’t be sterilised between customers, so is it worth the risk?

In the United States and Canada, there are several places where the practise has been outlawed, though it remains a popular trend in other countries. There are growing concerns over just how bad fish pedicures could be regarding the associated risks, so always be sure to weigh the pros and cons before undergoing one.

Well, I certainly didn’t know half of that information before, and it’s changed my perception of fish pedicures.

Did you know you could be at risk by enjoying a fish pedicure? Share this message to spread the word and give your friends and family the benefit of knowing!