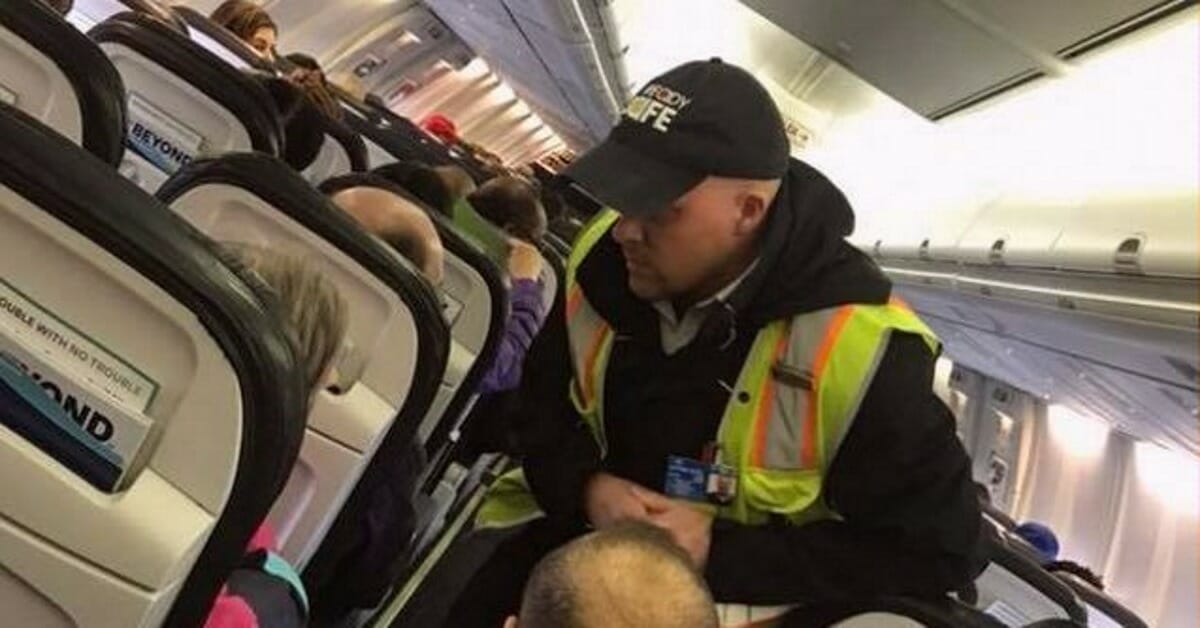 Did you know that at any given time there are around 14,000 airplanes in the air?

Although the number of aircraft taking off and landing around the world increases every year, construction of new runways is not factored into the development.

The result? Well, let’s just say it should come as no surprise that flight delays have become a common occurrence.

Of course, sometimes bad weather can be blamed, but often it’s other things that get in the way of a timely departure.

On occasion, it’s a passenger who causes the hold-up …

Share
Tweet
Thanks to the ever-increasing technology wielded by smartphones, we can follow ongoings from around the world — even from the confines of an airplane cabin.

Sure, as yet it doesn’t happen too often while you’re actually flying, but before take-off and after landing, many people take pictures to post on their social media accounts.

But when Kristen Wiley snapped an image of what happened during her last flight, people took notice for a reason that’s since gone viral.

You see, Kristen was stuck on a delayed flight at Seattle-Tacoma Airport, recently. She decided to post a photo with the following message on her Facebook page.

There was an interesting reason why her Alaska Airlines Flight 748 had not moved so much as an inch at the airport.

“We are currently sitting on a plane, with a 45 minute delay. Why? Because there is an elderly woman suffering from dementia, who is very upset and confused,” she wrote.

Kristen realized that it must have been a terrifying situation for the woman, especially when a security guard wearing a yellow vest came on the plane and approached her seat. Only the passengers in the vicinity knew what had happened, with everyone watching closely as the guard prepared himself to speak with her in the aisle.

The elderly woman was confused and sought comfort in her support dog in a desperate attempt to understand what was happening. It couldn’t have been easy for her to suddenly realize she was sitting in a seat on a crowded airplane, packed like a sardine in a flying jar.

Of course, many of the passengers were left frustrated by the long delay.

Kristen continued: “The incredible staff of #alaskaairlines  being extremely patient and compassionate, in what can only be a very scary situation for her. Explaining every step, cuddling her dog, working with her husband/caregiver to find the best solution. In short, the entire crew giving so much kindness.”

Fortunately, the flight attendants understood that the best way of dealing with the issue didn’t involve simply dragging her off the plane, which would have caused more worry and chaos. The crew had a different idea entirely.

And when Kirsten saw what the crew members did to ease the situation, she knew she simply couldn’t be angry over any delay.

In fact, on the contrary, she was taken aback with joy! It’s not every day you witness a heartbreaking situation handled with such compassion and care.

The attentive staff on the flight communicated quietly over the speaker system, describing what had happened. They also explained why the older woman and her husband were escorted off the plane.

She only needed some extra peace and quiet with her husband and dog, to feel less stressed about the trip.

“Alaska Airlines calmly assisted the woman, her husband/caregiver and sweet pup off the plane, providing hotel and transportation with plans to rest up and try again the following day. Again, incredible compassion given to the both of them while quietly explaining the situation to other passengers.”

At a time when airlines and, above all, airline employees get a lot of stick over delays, this story is a breath of fresh air.

Care, compassion, and service are something that we can all look to improve upon!

“This is how I would want my mother, my sister, my aunt, my daughter, my niece, my friend cared for,” wrote Kristen.

Every passenger deserves first-class treatment during this trip we call life, and it’s not up to any airline or other company to provide this.

It’s rather common people like you and me; we have the power to make others feel like a loved one, through simple actions alone.

Don’t forget that! Hit the SHARE button to spread the message!