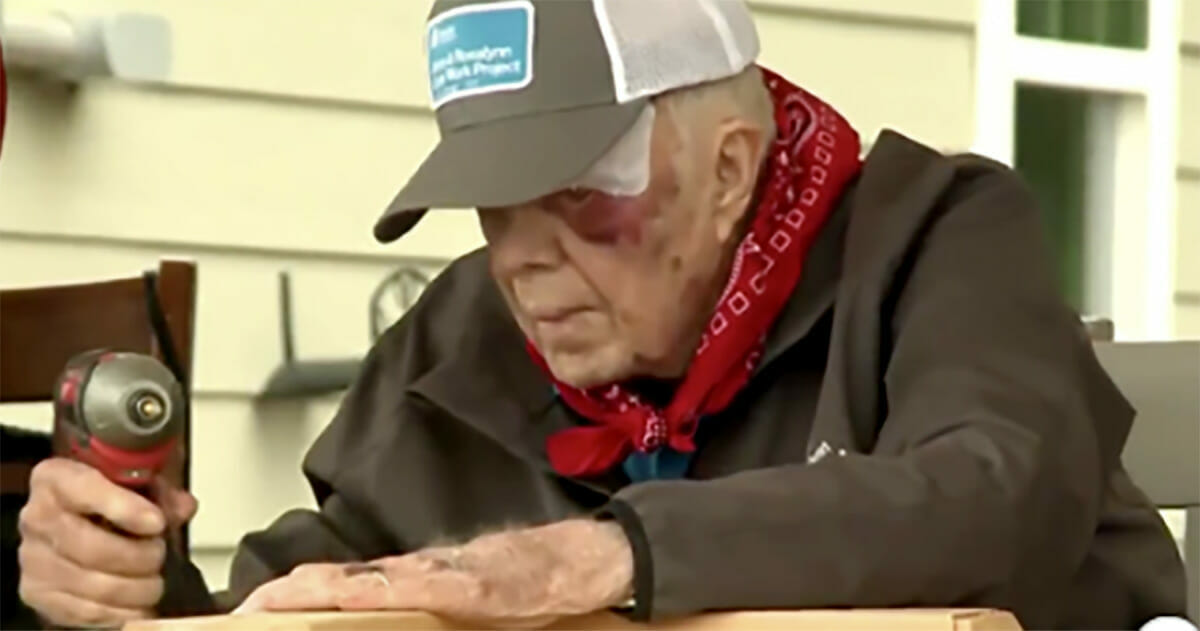 At 95 years old Jimmy Carter is the longest living U.S. president but has never let his mature years get in the way of continuing his good work.

Plans to help non-profit Habit for Humanity build affordable housing came into question when the night before he had a fall and had to have stitches.

But despite a black eye, stitches and a bandage he showed up the next day with his wife, ready and willing to volunteer.

The 39th Democrat president had fallen at his Georgia home and sustained an injury that required 14 stitches, according to The Washington Examiner.

Posted by Habitat for Humanity of South Hampton Roads, Inc. on Wednesday, 11 January 2017

But the very next day showed up at a building site in Nashville, Tennessee, wearing a white bandage and with a bruised eye ready to help build a community of affordable housing.

In footage released by NBC News that went viral, Carter, who was president from 1977 to 1981, was filmed working with a power drill.

He said despite the fall, “I had a No. 1 priority and that was to come to Nashville to build houses!”

This is the 36th Habitat for Humanity project Carter and his wife, former first lady Rosalynn Carter, have volunteered for, according to The Hill.

Habitat for Humanity is an international nonprofit that help families build and improve places they call home.

Fourteen stitches, a black eye, and a large bandage are no match for former President Jimmy Carter

Rowena Sara, from Habitat for Humanity International, told The Hill  that this project involves building 21 homes.

She said that the couple has worked with over 103,000 volunteers and helped build and repair 4,331 homes across 14 countries, according to The Hill.

“Since 1984, President and Mrs. Carter have been champions and strong voices for affordable housing for all, donating their time and leadership to build and improve homes through the Carter Work Project,” she added earlier this year.

On Sunday evening, hundreds of Habitat for Humanity volunteers and supporters joined future homeowners at Ryman…

Posted by Habitat for Humanity on Sunday, 6 October 2019

Former President Jimmy Carter is living proof that age is just a number; whatever is happening in our lives we shouldn’t let it get in the way of helping people.</strong

Share this story to thank former President Jimmy Carter for his continued support for this worthy project.