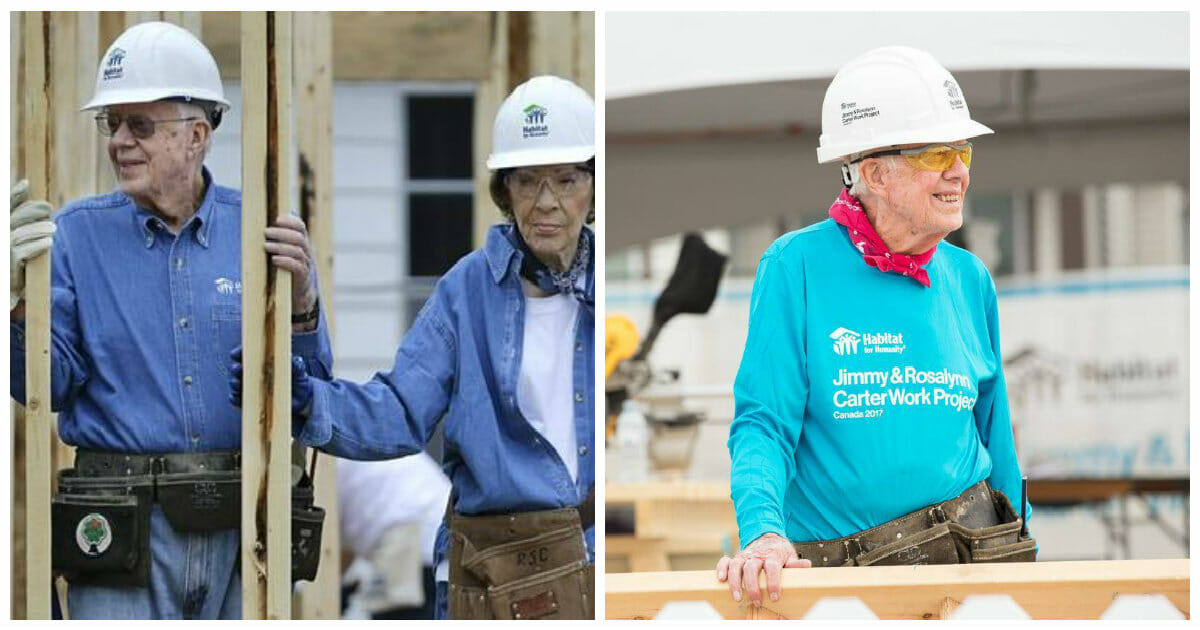 At 94 years old, Jimmy Carter has lived longer than any US president in history, and has had the longest post-presidency retirement. In the four decades since he’s left office, Carter has always kept himself busy with charities and causes to make the world a better place, from his human rights work with the Carter Center to raising funds for hurricane relief.

But he’s best known for his work with Habitat for Humanity, the nonprofit organization that builds homes for people in need. Carter and his wife Rosalynn have been their best-known spokespeople, but they go further than that: the former president and First Lady do their part in the construction with the other volunteers.

It’s real physical work, but Carter isn’t letting old age keep him from the cause—even after a hip surgery.

Posted by Habitat for Humanity of South Hampton Roads, Inc. on Wednesday, 11 January 2017

In May, it was announced that Carter had broken his hip after falling in his home in Plains, Georgia. He was heading out on a turkey hunt.

Breaking a hip at that age can be serious, and Carter was brought to the hospital for an operation. Still, he seemed to be in good spirits about the whole thing.

“President Carter said his main concern is that turkey season ends this week, and he has not reached his limit,” his press secretary Deanna Congileo said in a statement.

Posted by Restore of Cumberland County Habitat for Humanity on Monday, 18 February 2019

Despite that setback, the Carters will return to their work with Habitat for Humanity. They announced that they will participate in a build in Nashville, Tennessee this October.

“There have been many times when people have tried to count President Carter out, and they have never been right,” Bryan Thomas, a representative for Habitat for Humanity, told The Hill. “We are excited that they will both [be] back.”

“During the week, homeowners will work alongside President and Mrs. Carter and hundreds of other volunteers to build 21 new, affordable homes,” spokesperson Rowena Sara said.

Posted by Kalamazoo Valley Habitat for Humanity on Tuesday, 3 October 2017

It’s not the first time Carter has bounced back from a medical problem and returned to the cause. In 2016, he returned to work after a life-threatening battle with cancer that had spread to his brain.

“I wasn’t sure I would be back or not,” Carter said at the time, according to CNN. “But luckily, here I am.”

His resilience, even past 90, inspired fellow celebrity volunteers: “Nobody works harder,” country singer Trisha Yearwood said. “They lead by example, you know, and they really do work.”

Posted by Habitat for Humanity on Monday, 19 August 2019

The Carters have been involved with the organization since 1984. It is based out of Carter’s home state of Georgia.

According to WFAA, the Carters have worked on 4,331 homes across 14 countries in their three decades of service.

“President and Mrs. Carter know the cause of affordable housing is only becoming more urgent, and so we are so grateful they will once again mobilize hundreds of hands and thousands more voices to this cause,” Habitat for Humanity International CEO Jonathan Reckford said.

Jimmy Carter, a huge supporter of Habitat for Humanity, is our #mcm.

Posted by San Diego Habitat for Humanity on Monday, 8 February 2016

It’s great to hear Former President Carter is keeping up his charitable efforts even at his age. Let’s thank him for all his hard work! Share this inspiring news!